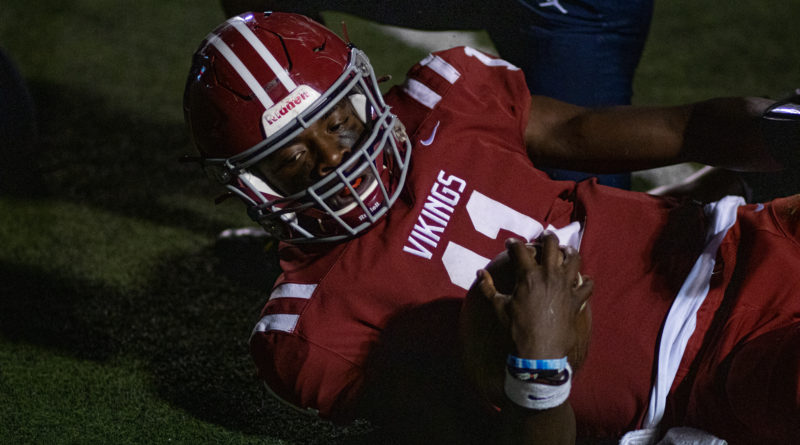 VALDOSTA, Ga. — Quarterback Jacurri Brown has been Lowndes’ star player all season, but he outdid himself Friday night against Norcross.

After throwing the touchdown pass that gave the Vikings a 35-34 lead with a minute left in the game, Brown picked off a pass from Norcross quarterback AJ Watkins to seal the game.

And he did all of that with an injured calf that caused him to miss half of the game.

Brown suffered the injury on the second drive of the game and didn’t get back on the field until the second half began.

But on Lowndes’ last chance to score, Brown threw a 23-yard touchdown pass to wide receiver Khris Thomas with 1:17 left to go to put the Vikings up 35-34.

“(Thomas) has been a go-to man all year,” coach Jamey DuBose said. “It was a last-ditch effort, and Thomas made the play. We’re celebrating, and I’m proud of him.”

On the ensuing drive, Brown picked off a Watkins pass and the celebration was truly on in Valdosta.

Despite the injury, Brown finished 9-for-18 with 198 yards passing and a score while adding 80 yards and a score on the ground.

Lowndes running back Chase Belcher was injured during the first drive, and it appears his season is over.

Brown and Belcher have been the key components to the Lowndes offense, so when they both went down, Brown was all the more motivated to play through his injury.

Lowndes took a 14-0 lead to begin the game as Brown ran in a 12-yard score, and backup quarterback Tate Sirmans threw a 5-yard touchdown pass to Thomas after coming into the game when Brown was injured.

Being forced to play a sophomore backup quarterback is never a situation a head coach wants to be in, but DuBose was pleased with Sirman’s performance while Brown was nursing his injury.

“(Sirmans) did what we needed him to do,” DuBose said. “He led us on a touchdown drive. I’m proud of what he accomplished.”

Norcross cut into the lead in the second quarter when a Lowndes punt was blocked and running back Zeek Johnson recovered the ball, returning it for a touchdown to make it 14-7.

The excitement on the Norcross sideline was short-lived, as Lowndes wide receiver Kevis Thomas returned the ensuing kickoff 98 yards for a touchdown to give Lowndes another two-score lead.

Going into halftime, the score was tied at 21-21 after two touchdown passes from Watkins, one a 73-yard pass to wide receiver Nakai Poole and the next a 5-yard pass to Poole.

Watkins finished 11-for-26 with 168 yards passing, two touchdowns and two interceptions while adding a team-high 39 yards on the ground and one score.

Lowndes answered with a 54-yard pass from Brown that set up running back Jacarre Flemings’ 2-yard rushing score to put Lowndes up 28-24.

Fleming rushed for 110 yards and one score on 17 carries.

Near the end of the third quarter, Watkins rushed for a 22-yard touchdown, and Duva opened up the fourth quarter with a field goal to put Norcross up 34-28.

Lowndes went four-and-out on the ensuing drive as a long pass from Brown fell incomplete.

However, the Lowndes defense forced a Norcross punt on the next drive, and Brown connected with Thomas for what proved to be the winning touchdown.

Next up is undefeated Collins Hill at Lowndes, and Brown is ready for the showdown against quarterback Sam Horn and the No. 1-ranked senior in the nation in Travis Hunter, who has been struggling with an injury this season.

“They’re really talented,” Brown said. “I think playing them at home gives us a good shot. Me and Sam will battle, and hopefully Travis is back so they have no excuses.”