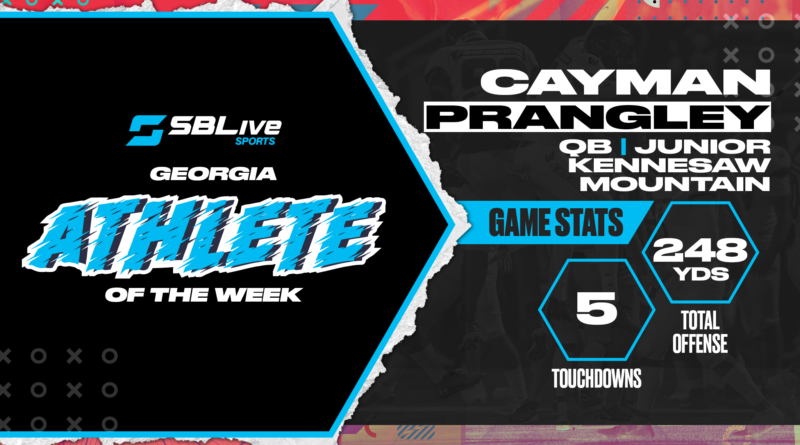 Congratulations to Kennesaw Mountain quarterback Cayman Prangley for being voted SBLive’s Georgia High School Athlete of the Week for Nov. 1-7!

The junior accounted for 248 yards of total offense and five touchdowns in a 47-0 win over Osborne that secured Kennesaw Mountain’s first region title in 20 years.

Prangley received 59.25% of the vote, beating out North Forsyth WR Logan Curry who finished second with 21.97%. Allatoona QB Tyler McGuire finished third with 10.73% and Archer K Miles Hamby finished fourth with 6.84%. There were over 21,000 votes tallied this week!

Neal led her team with 19 kills as Walton won the 7A state title over Alpharetta.

McGarity finished 40 seconds ahead of the runner-up to become the lone individual state champion in the Class 7A race.

Hughes was 22-of-29 for 346 yards passing and six touchdowns in a 42-14 win over Walton to clinch a home game in the first round of the playoffs.

In a game dominated by both teams’ defenses, Hamby was the only player to score, as he knocked through three field goals to give Archer a 9-0 win over Norcross to clinch the region title.

Curry hauled in a 59-yard touchdown reception and snagged an interception in a 38-13 win over Gainesville.

McGuire threw two touchdown passes, including a 62-yard touchdown on the Bucs’ first offensive play, and added a score on the ground in a 28-13 win over Pope.

Carter scored three touchdowns in a 40-8 win over Baldwin.

Patterson returned an interception 23 yards for a score in a 48-14 win over Douglas.

Merklinger threw three touchdowns in the second quarter alone in a 44-0 shutout of Aquinas.

Soliday threw two touchdown passes and rushed for another score in a 35-12 win over Turner County.

Miller recovered the ball after a botched punt attempt and returned it for a touchdown in a 33-0 shutout of Clarkston.

Eubanks kicked the game-winning field goal in a 24-21 win over Heard County.