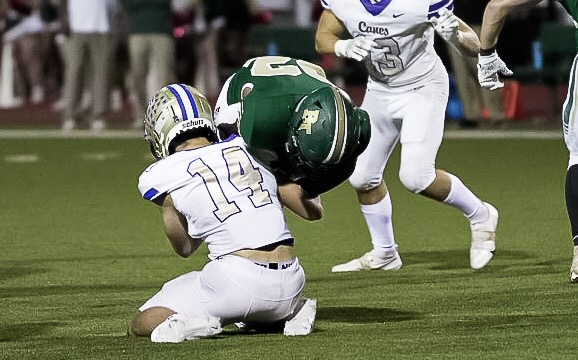 Here are some stars from Friday night’s first-round games across Georgia.

Pictured above is Cartersville safety Kace Adams (No. 14, photo by Josh Major), who had three interceptions Friday, two of them pick-sixes.

Thompson recovered a fumble and returned it 100 yards in a 41-17 win over Colquitt County.

With seven seconds left on the clock, Watkins threw a touchdown pass to Nakai Poole and successfully converted a two-point attempt with a pass to Lawson Luckie to ruin Cherokee’s comeback attempt in a 28-21 win.

Allen returned a blocked field goal 85 yards for a score in Walton’s 41-17 win over Colquitt County.

Perry hauled in two touchdown receptions in the first half of Marietta’s 28-14 win over Tift County.

Glymph kicked three field goals vs. Mountain View, including the game winner in the final seconds to give Denmark a 23-20 win.

Farrell threw for 214 yards with two touchdown passes and a rushing score in a 45-14 win over Duluth.

Pickett returned an interception for a touchdown in a 45-35 win over Harrison.

Horn threw two touchdown passes and rushed for two scores of 70 and 61 yards in a 56-13 win over Lambert.

Grant threw a touchdown pass to Damion Thompson as Pebblebrook trailed by four points in the fourth quarter, giving Pebblebrook a 44-41 win over Parkview.

Journey accounted for three touchdowns in a 49-20 win over West Forsyth.

Stockton threw five touchdown passes and rushed for two more scores in a 63-14 win over Pace Academy. He completed 18-of-21 passes for 302 yards and added another 154 yards on 12 carries.

Haynes snagged two interceptions in a 56-7 win over Newnan.

Adams grabbed three interceptions and returned two of them for touchdowns in a 51-0 win over Lithonia.

Speer finished with five receptions for 85 yards and two scores, and he recorded an interception in a 35-21 win over Decatur.

Castellanos threw three touchdown passes and rushed for a score in a 42-28 win over Banneker.

Taylor returned an interception 65 yards for a score in a 42-9 win over Cass.

Thomas scored two touchdowns and recorded two interceptions in the first half of Benedictine’s 59-0 shutout win over Thomas County Central.