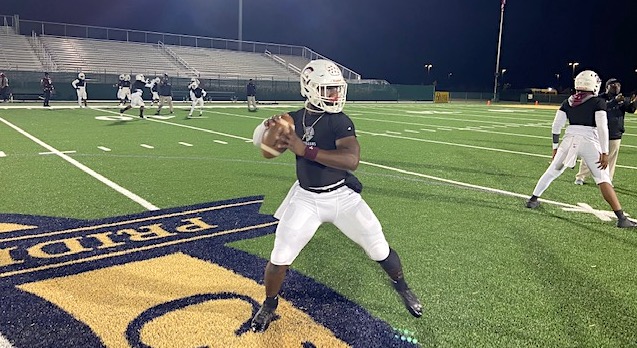 SAVANNAH, Ga. – Jenkins started off hot on Friday night, but then reality set in as they could not stop the best player on the football field.

Florida State commit Kameron Davis threw four touchdown passes and ran for a fifth to lead Dougherty to a 44-17 win over Jenkins in the opening round of the Georgia 4A football playoffs.

Running the old school wing-t offense, Jenkins gave the Dougherty defense trouble for much of the first quarter. The first drive had the Dougherty defenders looking lost and unsure of where to go when the opposing skill players would cross and the fake handoffs took place.

Just like that, it was 10-0 Jenkins. Then the dynamic Davis took over.

Although committed to Florida State to play running back, the sophomore actually plays quarterback for Dougherty. During the final five drives of the first half, Davis led his squad to touchdown drives, one on the ground and four through the air.

The first drive concluded with Davis running a quarterback isolation play to the right for a short touchdown run. At that point, the Dougherty offense was in sync and Jenkins started to look lost.

There were wide open Dougherty receivers, and Davis was finding them time and time again. The spread offensive attack did just that – spread the football around. The mainstay for Davis was simply scanning the field and finding the open man.

When he did hand the football to a running back, it was Gemarion Anthony that was doing the dirty work.

The quick-as-a-cat runner caused several missed tackles through the game, and he was a primary reason for Dougherty going on its five-drive scoring binge. Anthony was a really good complement to Davis.

Right before half, after Davis had thrown three touchdowns already, it was Davis’ arm that did the damage yet again. Throwing a bullet down the middle to wide receiver Daymon Polite, he connected between three defenders. Polite did the rest, fighting his way into the end zone.

In the second half, Dougherty took a more deliberate offensive approach in an attempt to bleed the clock and just finish out the game. While Jenkins did have one good drive that led to a touchdown run, there was never any doubt about which team would claim victory.

Dougherty dominated from the end of the first quarter through the rest of the game, and will advance to face Riverdale in the second round of the 4A state playoffs.