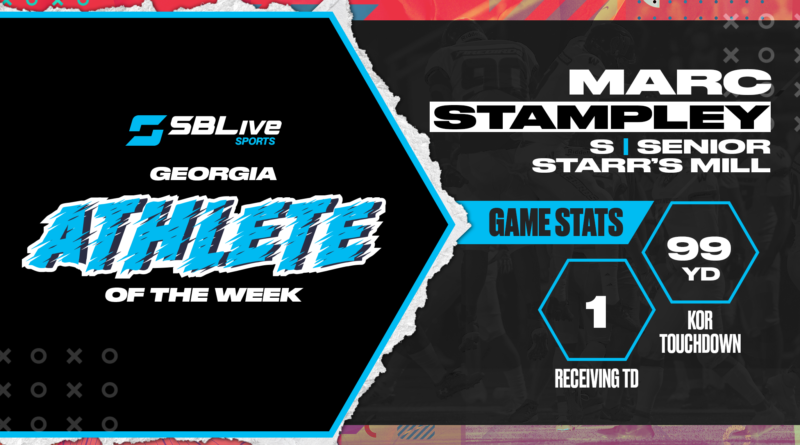 Congratulations to Starr’s Mill safety Marc Stampley for being voted SBLive’s Georgia High School Athlete of the Week for Oct. 25-31!

The senior returned the opening kickoff 99 yards for a score and hauled in a touchdown reception on the ensuing drive after recording an interception vs. McIntosh.

Stampley received 52.26% of the vote, beating out North Gwinnett softball’s Amber Reed who finished second with 45.72%. There were over 21,000 votes tallied this week!

Stockton broke Trevor Lawrence’s state record for most career touchdown passes with his 162nd in Week 11. He finished the win at Union County with 166.

Collins Hill has been without star player and FSU commit Travis Hunter since Oct. 1, but Horn continues to help the Eagles remain undefeated. He accounted for 235 total yards of offense and a touchdown pass in Week 11’s 40-10 rout of previously unbeaten Mill Creek.

Harden rushed for 111 yards and two touchdowns while adding 11 tackles on defense in a win over Providence Christian.

Fleitz threw for two scores and rushed for two more in a win over Anderson (South Carolina).

Cummings had 58 assists in a comeback win over Pope to secure a spot in the state championship finals.

Reed hit a double, two home runs and drove in four while striking out 10 batters from the mound as North Gwinnett won the 7A state championship over defending champion East Coweta.

Bonner caught four passes for 88 yards and two touchdowns in a win over South Gwinnett as Brookwood won its first region title since 2017.

Murray rushed for all three of Holy Innocent’s touchdowns in a 21-0 win over Wesleyan.

Parker threw two touchdown passes in a 21-14 win over Calhoun to clinch the region championship.

Crummel finished with 17 kills in the Class 7A Final Four vs. Alpharetta.

Johnson rushed for two touchdowns in the second half vs. River Ridge, including the score that put Johns Creek up 40-36 with a minute left in the game.

Woods threw two touchdown passes and rushed for another in a 49-7 win over Tri-Cities.

Todd rushed for all four of Troup’s offensive touchdowns in a 35-14 win over LaGrange.

Barnes sealed the 11-6 win over Jefferson with an interception with less than a minute left in the game.