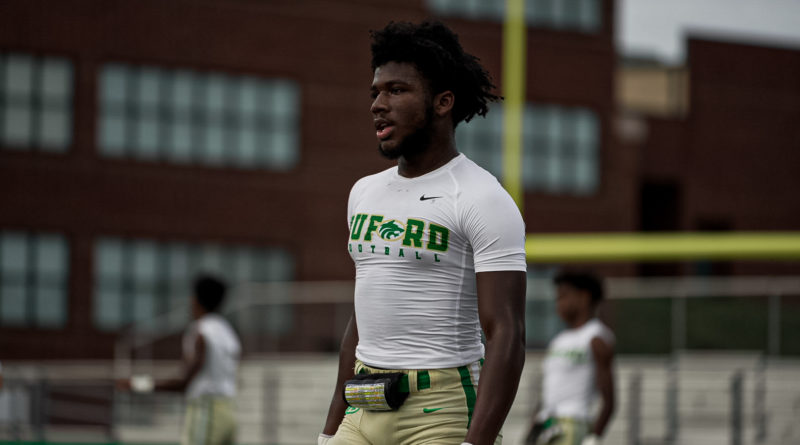 DACULA, Ga. — If there’s any high school football team that knows the importance of peaking at the right time, it’s Buford.

After all, the Wolves have won 12 state championships over six classifications since 2001.

Judging from their performance in a ruthlessly efficient 42-7 win over Dacula — one of their oldest Gwinnett County rivals — in the regular-season finale Friday night at Barron Field, they appear to be hitting their stride just in time for the Class 6A state playoffs.

Three-star Stanford-committed senior quarterback Ashton Daniels threw for 117 yards and scored a touchdown each passing, rushing and receiving to help the Wolves claim the Region 8-6A championship, their 18th region title in the past 21 seasons.

Meanwhile, the Buford (9-1, 6-0) defense limited Dacula (6-4, 5-1) to just five first downs on the night as the Wolves, who have won state titles at 5A and 6A the past two seasons, had the look of a team hungry for a third straight state title when the 6A playoffs start Saturday.

“Obviously, (Friday’s game) wasn’t perfect, but we played pretty good. We’ve got a long way to go, but I think we’re on the right track to have a chance to be special the next several weeks.”

Buford was special in pretty much every area Friday night.

Offensively, the Wolves outgained Dacula 304-60 in total offense behind the throwing of Daniels, including a 64-yard scoring strike to four-star Florida-committed receiver Isaiah Bond, and the running of junior Christian Butler (9 carries, 55 yards and a touchdown).

They even pulled off a little razzle dazzle on a 40-yard TD pass on a receiver option pass from Tyshun White to Daniels.

The Wolves also forced two Dacula miscues on special teams, including a Jack Darmon blocked punt that V.J. Payne returned for a touchdown and a Jaylen Neal fumble recovery on a kickoff return, which backup quarterback Dylan Wittke turned into a 19-yard score on the next snap.

But what impressed Appling most is how the Wolves exhibited a killer instinct, part of which was based on the longtime rivalry with Dacula that dates back to 1964, though Friday’s matchup was only the second between the two schools since 1995.

It’s also something that should bode well when Buford opens up this year’s state playoffs Saturday against Kell at home at Tom Riden Stadium.

“It definitely is (a good sign),” said Appling, whose program is set to move up to Georgia’s highest classification, 7A, starting next year. “They haven’t had a whole lot of rivalries in the last 15 years because we keep moving up (in class). Dacula and Lanier, definitely our crosstown rivals (the past two years) because they’re right around the corner. They’re pretty good teams and our kids get up for those games. They played against them all in the (Gwinnett Football League youth programs) when they were young, so it gives them a little extra engine, a little extra want-to during the week. It helps us play good on Friday night.”