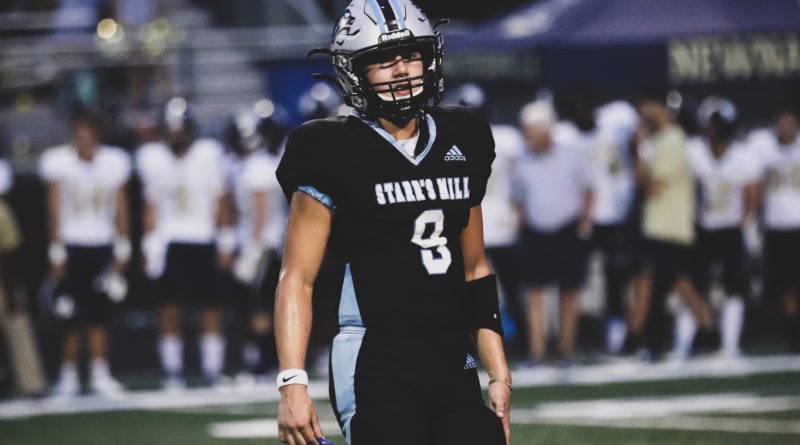 Playoff time is near, everybody.

This week marks the 12th and final week of the 2021 regular season in Georgia.

Some teams know their fate for the postseason, while others will work it out on the field Friday night. Of course, not everyone can make the playoffs. Over 150 teams will see their season come to an end this weekend.

Here’s a look at who’s secured their spot in the playoffs and which Week 12 games have playoff implications.

Collins Hill, North Cobb, Lowndes and Brookwood have secured four of the eight No. 1 seeds in Class 7A. The other No. 1 seeds will be decided Friday with multiple region titles on the line. The results of Milton vs. Cherokee, McEachern vs. Pebblebrook, Archer vs. Norcross and Denmark vs. West Forsyth will go a long way in determining how the playoff bracket looks in 7A.

Class 6A’s Region 1 has four teams, so usually they all make the playoffs. However, Valdosta is banned from the playoffs this year, so the region will send only three teams to the postseason. Lee County won the region title and No. 1 seed, while Northside-Warner Robins and Houston County secured 2 and 3 seeds, respectively.

Other than Region 1 and Region 4, which Langston Hughes won, most of 6A’s playoff matchups remain undecided. Brunswick and Effingham County play this week for the Region 2 title and No. 1 seed, along with Alcovy and Evans in Region 3.

SBLive’s No. 4 team in Georgia, Buford, heads to Dacula for the Region 8 championship game. With an 8-1 record entering Week 12, Kennesaw Mountain has already secured its first winning season since 2008. With a win over Osborne (1-8), the Mustangs will also secure their first region title in program history.

Four teams in Class 5A — Ware County, Cartersville, Clarke Central and Villa Rica — have already written their names in the bracket as a No. 1 seed.

Whitewater can wrap up a Region 2 title with a win over Harris County on Friday, but a loss could set up a three-way tie for first place between the two teams and Starr’s Mill.  One of the state’s top matchups this week, Creekside-Woodward Academy, will decide who takes the crown in Region 3. Dutchtown and Jones County will face off for the Region 4 championship.

St. Pius looks to finish region play undefeated when it goes to Decatur, which is right behind them in the standings. A Decatur win could force a three-way tie between the two teams and Southwest DeKalb.

Bainbridge, Benedictine, Carver (Columbus) and North Oconee secured region titles and top seeds in the playoffs with wins in Week 11. Baldwin can join the group by defeating Perry in Week 12 for the Region 4 championship, as can Region 7’s Cedartown with a win over Heritage (Catoosa). The winner of Riverdale vs. Luella and Marist vs. Mays will finish first in Region 5 and 6, respectively.

Four teams — Crisp County, Liberty County, Thomson and Cherokee Bluff — secured a No. 1 seed for the 3A playoffs with a win last week. Otherwise, there’s plenty to be determined in the final week of the regular season.

Appling County and Pierce County are both ranked in the top 5 of Class 3A, and Friday they’ll face off for a region title. Cedar Grove can clinch a No. 1 seed with a win over Sandy Creek, which is also in the hunt for the top spot in its region. Ringgold and Rockmart play for a region title, with the former looking for its first in program history. Monroe Area secures the Region 8 championship with a win at home against Hart County, while a loss sets up a three-way tie between them and Oconee County.

Of all the classifications in the state, 2A has the least left to be decided in the final week of the regular season. Six of the eight regions have crowned champions, and some have even settled second, third and fourth place.

The teams currently with a No.1 seed in their possession are Thomasville, Swainsboro, Bleckley County, Putnam County, Haralson County and Rabun County.

South Atlanta and Columbia will square off for the Region 6 title, along with Dade County and Fannin County in Region 7.

Half of the No. 1 seeds in Class A have been snagged, as Pelham, Irwin County, Bowdon and Georgia Military College all clinched region titles.

Metter hosts Emanuel County Institute with a region title going to the winner. Wilcox County can wrap up the Region 4 title, but a loss combined with a Dublin win over Montgomery County would set up a three-way tie between the teams. Similarly, Macon County can secure a Region 5 championship with a win over Chattahoochee County, but a loss combined with Schley County defeating Central (0-9) would create a three-way tie. Commerce can secure first place in Region 8 with a win over Lincoln County, but a loss could drop the Tigers to third in the region.

Following the recent release of the GHSA’s reclassification plans, all six schools in Region 1 announced they will be leaving the association following this school year and joining the GISA. In the meantime, First Presbyterian Day earned a No. 1 seed for the final go-around in the GHSA playoffs.

Aquinas and Calvary Day will face off for a region title, along with St. Anne-Pacelli and Trinity Christian. Eagle’s Landing can clinch a region championship with a win over Landmark, but a loss would force a three-way tie with them and Whitefield Academy. The region has only three teams, so no matter how it shakes out, they’ll all be playing next week.

Other teams with a No. 1 seed locked up include Holy Innocents’, Fellowship, Darlington and Prince Avenue.