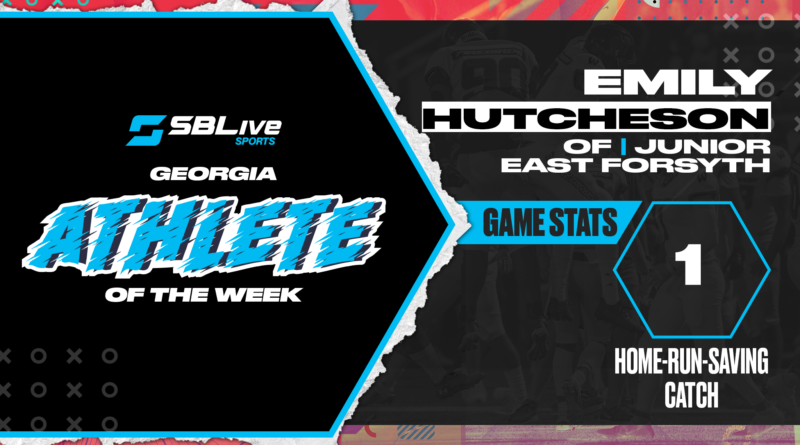 The junior outfielder prevented a Pierce County home run when she jumped and reached over the center-field wall to snag the ball.

Hutcheson received 44.82% of the vote, beating out Brookwood RB Alexander Diggs who finished second with 38.33%. South Cobb QB Javon Richardson finished third with 16.03% and Grayson S Myles Woods finished fourth with 0.27%. There were over 43,000 votes tallied this week!

Diggs rushed for three touchdowns and accounted for 234 total yards of offense vs. Grayson.

Woods intercepted two passes and recovered a fumble in the loss to Brookwood.

May won the boys individual region 3-6A title race, finishing five seconds ahead of the second-place runner.

Armstrong had 20 digs from her setter position as Mt. Paran beat St. Vincent 3-0.

Richardson, who is only a sophomore, threw for 296 yards and three touchdowns while adding 118 yards and a score on the ground vs. Osborne.

Ashley won first place in the Region 6-7A championships with a time of 15:42, 19 seconds faster than the second-place finisher, as Denmark won its third straight region championship.

Tyre threw four touchdown passes, his most in a single game this year, as Lambert beat Forsyth Central 35-3.

Bartling hauled in a touchdown reception and took an interception back for a score vs. North Georgia.

Stover threw for 280 yards and five touchdowns while adding 75 yards on the ground on nine carries.

Hutcheson prevented a Pierce County home run when she jumped and reached over the center-field wall to snag the ball.

Belcher rushed for 138 yards and two touchdowns in a 52-31 win over Colquitt County.

Bond caught only two passes vs. Lanier, but they went for 91 receiving yards and a score in a 56-0 shutout.

Zalewski intercepted a pass and returned it 62 yards to put Mill Creek up 17-14 vs. Newton at the half, and the score would remain the same until the game ended as Mill Creek advanced to 8-0.

Parker threw three touchdown passes in a 49-7 rout of Woodland in Week 10.

Skipper rushed for three touchdowns, one a 76-yard score, and intercepted a pass in a 33-13 win over Veterans.