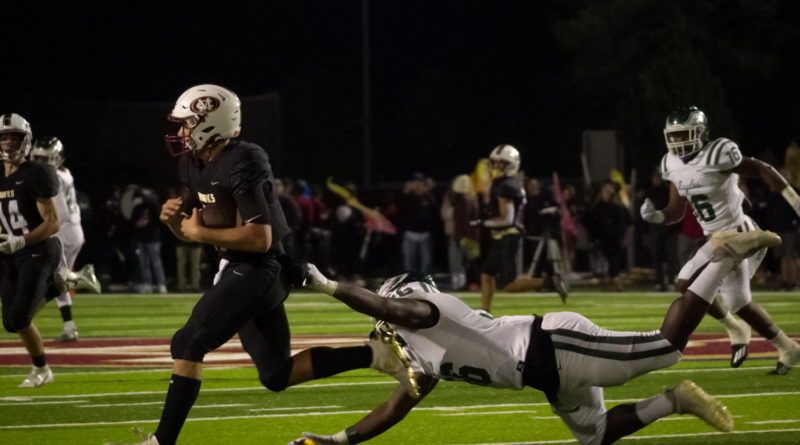 Jefferson had been cruising of late, but North Oconee hit the brakes on the Dragons’ undefeated season with an impressive defensive performance.

But the most impressive team in Georgia remains Collins Hill (photo by Willie Prince), which throttled Mill Creek 40-10 away from home Friday to end its regular season undefeated.

In a battle between two of SBLive’s top 5 teams in Georgia, Collins Hill remains undefeated after giving Mill Creek its first loss of the season.

North Cobb advances to 8-1 overall and 4-0 in region play after holding Marietta to a single score.

Milton remains undefeated in region play and Woodstock remains winless after this rout.

Buford would have shut out its fifth consecutive opponent if not for a safety against Winder-Barrow.

Mill Creek suffered its first loss of the season in a region game in convincing fashion vs. Collins Hill.

Calhoun started scoring in the second half, but Cartersville was already up by 14 points and managed to hold their lead and protect its undefeated record in this region matchup.

Lee County scored all of its 13 points in the first half and remains undefeated in region play after a dominant defensive performance.

Ware County is one win away from clinching the region title after beating Veterans on the road.

Coffee led 7-0 after the first quarter, but the Warner Robins offense found its rhythm in the second and pulled away with a victory to advance to 8-1 overall and 2-1 in region play.

Creekside is 6-0 in region play after beating Jonesboro at home in Week 11.

Defense was the name of the game, and North Oconee had more of it as Jefferson suffered its first loss of the year in a region game.

Trailing 21-7 in the fourth quarter, Lowndes scored 28 points to stage a comeback vs. Camden County.

Brookwood is now 3-0 in region play and had the game put away early, leading South Gwinnett 51-7 at the end of the first half.

Walton advanced to 3-1 in region play after beating Harrison handily.

The Colquitt County defense held Tift County to a single score to bounce back from its loss last week.

Westlake notched its second shutout of the season.

Marietta drops to 5-4 overall and 2-2 in region play after this Week 11 region matchup that featured two of Georgia’s best quarterbacks in Marietta’s Tyler Hughes and North Cobb’s Malachi Singleton.

Trinity Christian pulled off its second shutout of the season vs. winless Heritage to advance to 9-0 on the season.

Woodward Academy remains undefeated after blowing out Tri-Cities in a region matchup.

Grayson clinched a home game in the first round of playoffs after a hard-fought win over Newton.

Thomasville is 5-0 in region play after beating Berrien.