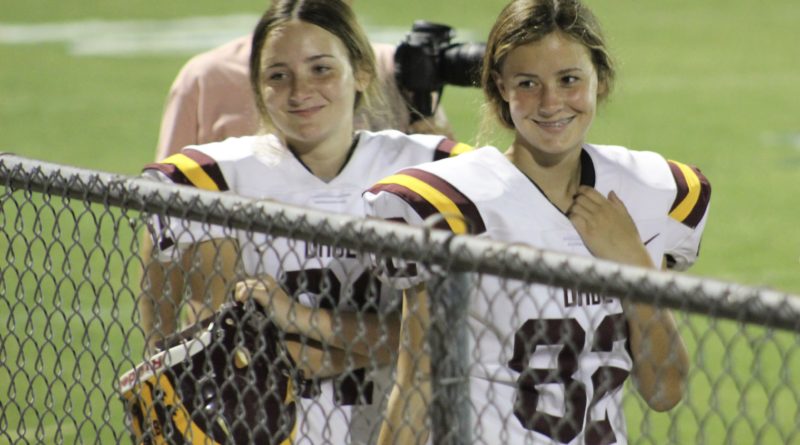 Abbigail and Caroline Tremmier used to simply be football fans, rooting for the Georgia Bulldogs on Saturdays.

Now the 15-year-old twin sisters are the co-starting kickers for the football team at Dade County High School in Northwest Georgia.

Their transition from football fans to football players started when Jeff Poston, who’s in his second season as head coach of the Dade County football team, saw them kicking at a soccer game one afternoon.

“The next day at school, he talked to me and was like, ‘Y’all should be our kickers on the football team,'” Caroline said.

Thinking it was a joke, the twins brushed it off at first, but Poston wasn’t laughing.

“We didn’t take it seriously, but he kept on asking,” Caroline said. “We looked into it and ended up on the football team.”

Poston’s offer has worked out well for the 6-2 Wolverines, as the Tremmier twins combined to go 7-for-7 on PATs in a 51-0 Week 2 win and have continued to excel.

“When I saw (the Tremmier sisters) kick, there was no reason they couldn’t do it on the football team,” Poston said. “I wouldn’t consider it outlandish. If you can athletically do the job, I’m going to let you do the job.”

Poston took the same approach as Dade County’s wrestling coach, as Heidi Raines beat 28 boys in the regular season and won the state championship in the girls division as a freshman.

One adjustment Poston made this football season was giving the sophomore twins the team’s training room as their own personal locker room.

The Tremmier sisters said they have received nothing but support from their mom and dad in playing football with and against a bunch of boys.

“My parents were both really proud that we even showed up the first day,” Abbigail said. “They think it’s cool that we’re playing now.”

While the twins both love playing football, they disagree on where their athletic career started. Caroline says their first sport was basketball, while Abbigail believes it was softball.

But they agree that team camaraderie is one of their favorite parts about playing football.

“Talking to all the people, having friends, laughing with them and having good times are the best parts (about playing),” Caroline said.

Dade County plays at winless Gordon Central on Friday and at undefeated Fannin County on Nov. 5 to complete the Wolverines’ regular season.