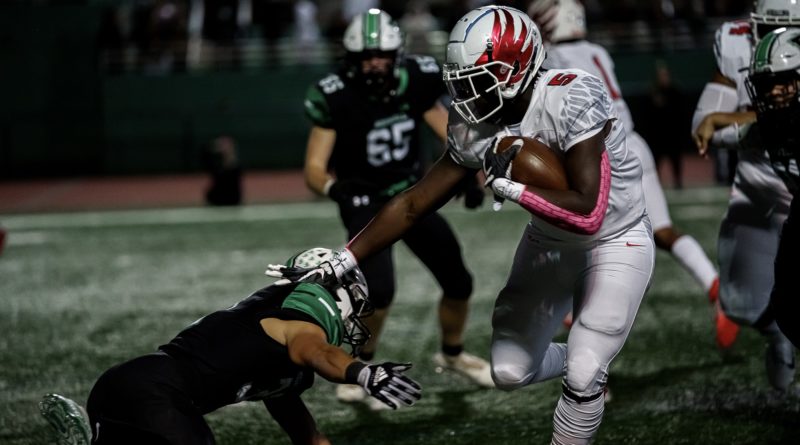 Friday night, Milton’s senior running back posted five touchdowns — three rushing, one receiving and one passing — in a win over the Eagles’ longtime rival Roswell. On Saturday, his brother’s 26th birthday, McDonald honored his older sibling by verbally committing to the University of Central Florida.

His five-touchdown performance against Roswell was enough by itself to make it a weekend to remember. Add to it his college commitment, which he chose to announce on his brother’s birthday, and the weekend cemented itself as one of the best for McDonald and his family.

“My brother and I have been working on this since I was like 3 years old,” McDonald said. “He’s been taking me out in the backyard playing catch every day. I remember summer days going into middle school he would take me out to these baseball fields near our house and throw balls to me and work on routes. To see all the work he’s done helping me perfect my craft come to fruition on his birthday, it’s something he loves.”

McDonald, whom teammates and coaches have compared to Derrick Henry for his ability to break tackles and stay upright, earned his first college offer from Kentucky as a freshman and picked up 15 more before his junior year, when he officially took over as Milton’s starting running back.

Once he became Milton’s No. 1 option in the backfield in 2020, he put together one of the top seasons for a running back in the state. He rushed for 1,338 yards and 24 touchdowns, and the Eagles made it to the 7A quarterfinals.

“When it all started I was just surprised,” McDonald said. “It’s been very fun. I’m very thankful.”

In the end, the Knights won the race for McDonald, who felt nothing but love from the team, coaches and fans.

“My whole family loves them,” he said. “I love them. The fan base loves us. We really felt everything and felt that connection there. It’s something that’s always been great and special.”

When McDonald graduates from high school and moves to Orlando, he’ll become the eighth Milton running back since 2013 to play college football.

“Of all the great things there are about this profession, that’s on the Mount Rushmore (of it),” Milton head coach Adam Clack said. “When you get to watch a kid grow up and mature. When you get to see him work hard for his goals and then start to self-actualize those goals and achieve the dream of being able to go to college for free. And to use that vehicle to better their lives. That’s what it’s all about.”

That Milton running back from 2013 is Peyton Barber, who plays in the NFL for the Las Vegas Raiders and spent his college days playing for Gus Malzahn at Auburn.

Beginning next summer, now-UCF coach Malzahn will once again have a former Milton running back on his team.