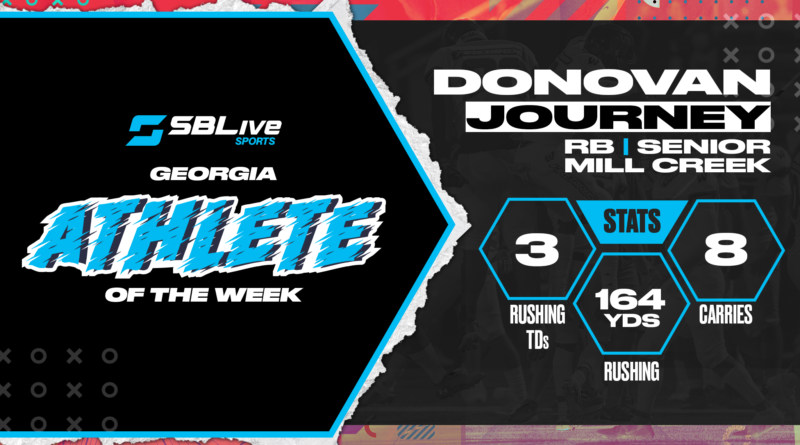 Congratulations to Mill Creek running back Donovan Journey for being voted SBLive’s Georgia High School Athlete of the Week for Oct. 11-17!

The senior rushed for 164 yards and three touchdowns on eight carries in a 56-0 shutout win over Mountain View.

Journey ran away with this week’s honor, receiving 61.76% of the total vote.

Neal had 14 kills and led her team to its 12th straight region 3-7A title vs. North Cobb.

Hughes was 20-of-28 with 392 total yards of offense while throwing five touchdown passes and rushing for another in Marietta’s 48-0 shutout of Hillgrove.

Casagrande had 38 assists in the win over Dunwoody in the finals of the 7A tournament.

DeNardo hit two home runs in the first round of playoffs vs. North Gwinnett.

McGuire went 6-for-6 with 156 passing yards and three touchdowns in the first half as Allatoona beat Sprayberry 43-7.

Parker rushed for two touchdowns and grabbed an interception vs. Walker.

White rushed for 156 yards and two touchdowns on 17 carries in a win over Blessed Trinity.

Givhan broke six tackles as he returned a kick 75 yards for a score in a 51-29 win over Walton.

Kluse caught four passes for 116 yards and two touchdowns in a 45-28 win over North Paulding.

Kiel finished with three total touchdowns in a 62-0 shutout victory over Towers.

Hyatt rushed for four touchdowns and threw for another score vs. Temple.

Swain returned an interception 95 yards for a score in a 20-17 win over Pickens.