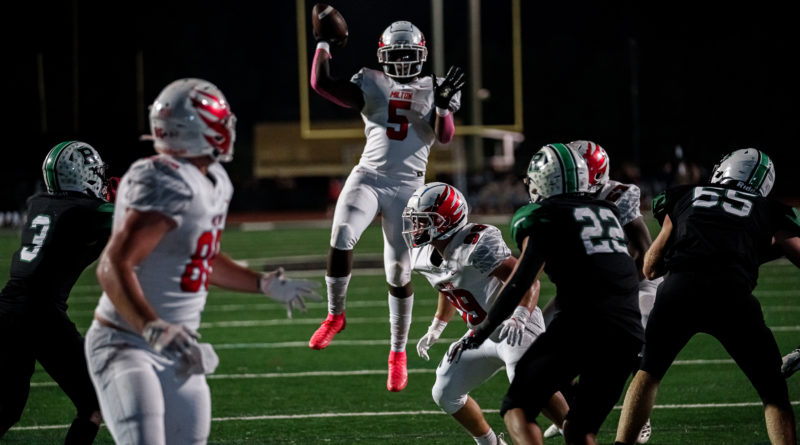 Pictured above is Milton running back Jordan McDonald, who had touchdowns via run, pass and reception on the night before he committed to UCF.

Diggs finished the game vs. Grayson with 234 total yards and three rushing touchdowns.

Hughes is no stranger to this list, and his performance in Week 10 mirrored the success he’s had all season. Hughes finished with 270 passing yards and three touchdowns as he led Marietta to a 35-12 win over Harrison.

Woods, a sophomore, recorded two interceptions and recovered a Brookwood fumble during a punt return in the loss to Brookwood.

Jackson caught three passes for 110 yards and one touchdown in a loss to Allatoona.

Ellington hauled in five passes for 138 yards and a score in the loss to Riverwood.

McDonald rushed for 132 yards and three touchdowns on 10 carries in a 44-34 win over Roswell, in addition to throwing and catching a TD. He announced his commitment to Central Florida on Saturday.

The sophomore carried the ball 15 times for 129 yards and a touchdown in a win over Randolph.

Harpring, son of former NBA player Matt Harpring, intercepted a pass and returned it 22 yards for a score in a 64-12 win over Stephenson.

Simmons finished with 234 yards and three touchdowns, including a 73-yard run, in a win over Osborne.

Hampton scored once through the air with a 91-yard touchdown pass and once on the ground with a 15-yard rush in a loss to Allatoona.

Smith accounted for 415 yards of total offense and five touchdown passes in a 40-33 win over Cambridge.

Najjar intercepted a Randolph pass and returned it to the 5-yard line before catching a touchdown pass on the ensuing offensive drive. Cohasset won 33-10.

Shelley rushed for two touchdowns and threw for another in a win over North Cobb.

The freshman went all out vs. Osborne, throwing for 296 yards and rushing for 118 yards with three touchdowns through the air and one on the ground in the Week 10 win.

Prangley went 6-for-13 for 231 yards and four touchdowns. He threw three of his touchdowns on his final three passes of the game.

Thompson rushed for 229 yards and a score in a 35-23 win over North Cobb Christian.

Diaz kicked the game-winner as time expired with a 32-yard field goal to give Pebblebrook a 31-28 win over Newnan.

Paige finished 11-for-26 for 182 yards and two touchdowns with 81 yards on the ground in a loss to Pebblebrook.

Lonergan was 23-of-31 for 216 yards and one touchdown through the air while adding 65 yards on the ground in a win over Grayson.