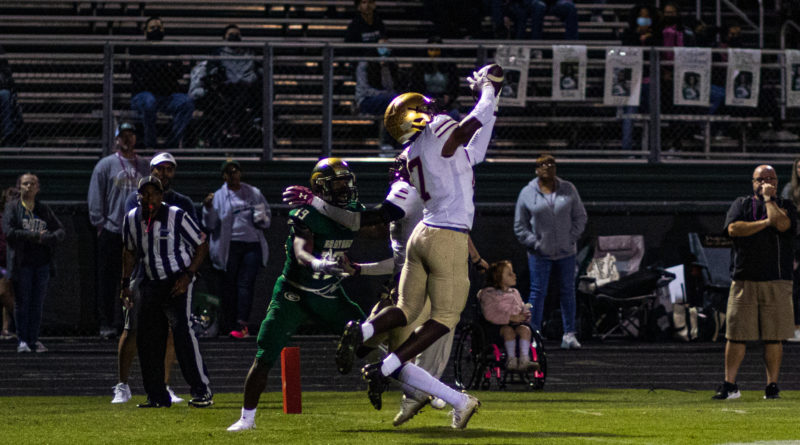 Grayson had its senior night Friday, but Brookwood spoiled that party in Loganville with an impressive 35-14 win.

The Brookwood offense was led by senior running back Alexander Diggs, who finished with 234 total yards and three rushing touchdowns.

“I’m just so proud of this team as a whole,” Brookwood head coach Philip Jones said in the postgame TV interview. “Grayson’s had our number — I think six years in a row — so it’s definitely exciting to come here with (GPB Sports) here so that everybody can see that we have a pretty good football team.”

Brookwood put the first points of the game on the board as Diggs broke free and cruised into the end zone on a 35-yard rushing touchdown in the first quarter.

Brookwood made it 14-0 before the second quarter expired as quarterback Dylan Lonergan connected with running back Jumal Prothro on a 15-yard touchdown pass.

Lonergan finished with 23-for-31 passing with 216 yards and a touchdown, plus 65 yards rushing on 12 carries.

Diggs opened up the second half with a 51-yard rushing touchdown to make it 21-0.

On the ensuing drive, Brookwood recovered a Grayson fumble.

The offense hit the field and capped the drive with Diggs’ third and final rushing score of the night as he scored from five yards out.

Trailing 28-0, Grayson got its first score near the end of the third quarter as wide receiver Joseph Stone rushed for a 21-yard touchdown.

Diggs was injured in the fourth quarter, but it wasn’t serious.

With Diggs sidelined for a few drives, Lonergan ran in a 1-yard score on a quarterback keeper to seal the win, making it 35-7.

“We really just came in this game with the mindset that if we do our game, we’ll be all right,” Diggs said in a postgame TV interview.

Grayson’s Mumu Bin-Wahad, a West Virginia commit, returned a kick 84 yards for a touchdown with around four minutes left in the game, but that was the last score Grayson managed.