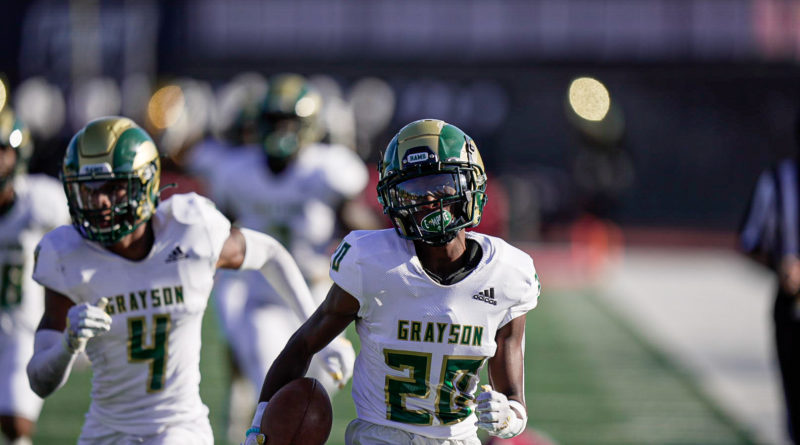 Two SBLive Georgia Top 25 matchups, a battle between undefeateds, and opponents fighting for the top spots in their respective regions make Week 10 a big one in high school football.

Thomasville and Fitzgerald share a 7-1 record and are both undefeated in their region. Both teams are on pace to make another deep playoff run, and the outcome of this game won’t determine future success, but expect a great game from these region rivals. When they matched up last season, Fitzgerald walked away victorious after a 29-28 thriller.

Four of Denmark’s five wins have come against region opponents, and South Forsyth is the other region team atop the standings at 4-0. Denmark comes into this matchup boasting a tenacious defense that has held opponents to only 10 points per game, but the Danes’ offense has struggled at times. South Forsyth, on the other hand, has the ability to score in bunches. The War Eagles have won six straight after their season-opening loss. Behind the arm of Ty Watkins with his 1,200 passing yards, 15 total touchdowns and no turnovers, the War Eagles will look to continue to light up the scoreboard against a tough Denmark defense.

Trinity Christian has scored 372 points this season while only allowing 61. Quarterback David Dallas has been the main standout, with 2,000 total yards, 27 total touchdowns and only two interceptions. Brookstone has a tough task going into this week’s matchup, but the Cougars are no pushover. They are averaging 30 points per game on the season, scoring 70 points in their season opener and picking up two shutouts, so they can play on both sides of the ball.

Cambridge is coming off a 48-47 overtime victory over Johns Creek, which fits the narrative of this being the Bears’ best team in school history. Cambridge is averaging 38 points in its last three games and has three shutouts. Outside of its eight-point loss to Johns Creek, Riverwood has allowed an opponent to score 20-plus in only one game, and the Raiders are averaging 36 points per game.

Mill Creek has been in command of every game it has played thus far. The Hawks are enjoying their best start to a season since 2016. On both sides of the ball they are flat-out dominant, scoring 277 points while allowing only 71, and they have yet to allow an opponent to surpass 17 points. The Hawks have a big matchup against Collins Hill next week, but it would be foolish to overlook Newton, which has lost two out of its last three. The Rams are averaging only 19 points per game and going against a stingy Mill Creek defense.

Lee County comes into this matchup having scored 364 points on the season. The Trojans have won back-to-back games since their blowout loss to Warner Robins. Lee County hasn’t lost multiple games in the regular season since 2016. Northside’s wins have been dominant, but in the Eagles’ two road losses they gave up 100 points and scored only 14. Lee County has won the last six matchups, so the odds may seem stacked against Northside, but the Eagles have shown they can put up big points and bring hot offenses to a halt.

Monroe has been toppling its competition with ease, winning the old-fashioned way with a solid ground game and defense. The Hurricanes have two elite rushers in Alan Jones (1,000 yards) and Selatian Slaughter Jr. (932 yards). Defensively they are holding their opponents to seven points per game. Oconee County knows how to flex its muscles on defense as well. An opponent has scored 20-plus on the Warriors only once, and they have a complete offense to complement their outstanding defense. This will be a great matchup between two of the last couple of big-name undefeateds in Georgia.

Colquitt County is on pace to have one of those typical Colquitt County-esque, dominant type of years. Other than a seven-point home loss to Westlake, the Packers have had success with all their other opponents. It seems like they only win in two ways, 50-point blowouts or tight-knit games. Lowndes’ two losses both came at less than a seven-point margin. One thing you can count on in this matchup is great quarterback play. The Packers’ Neko Fann who has 1,284 yards, 19 touchdowns and only two interceptions and will be going toe-to-toe with Jacurri Brown, who has 1,800 total yards, 22 total touchdowns and two interceptions.

Since Milton’s loss in its second game at North Cobb, the Eagles have outscored their opponents by 108  points and are averaging 50 points in their last three games. Behind Virginia Tech quarterback commit Devin Farrell, the Eagles are primed and dangerous. The last three games have been somewhat of a roller coaster for Roswell. The Hornets went from averaging 40 points a game in their first four games to losing their first and only scoring 19, and then they barely won against a team that had yet to win a game. But in their last game they won while scoring 40 points, so the Hornets are hoping that along with their bye last week, they’re back on track.

Even with two losses, the Grayson Rams are playing good football, though the margin of victory has been very slim. Their ground attack is alive and well though, with three players over 500 yards. On the other side of things, Brookwood has been playing phenomenal the past few games after a 35-33 loss to North Paulding. The Broncos have been putting together wins and are always exciting to watch thanks to their dynamic offense, led by quarterback Dylan Lonergan.

There is too much great Georgia football to stuff it all into just 10 games. Here are 10 more solid matchups in Week 10: