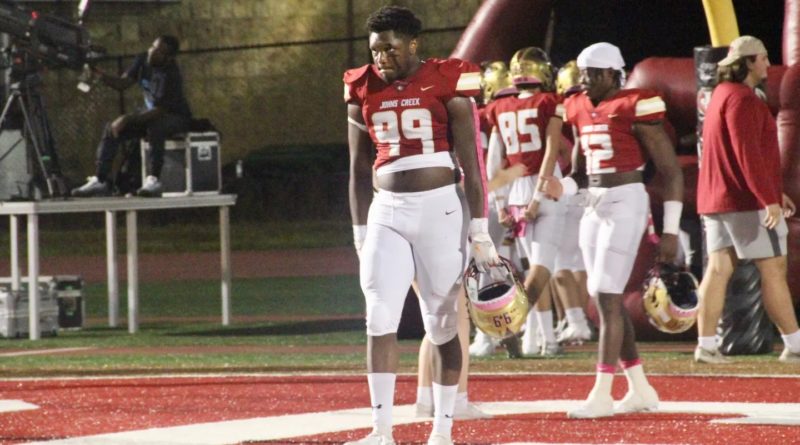 This was the last week of taking a position-by-position look at some of the top players in Georgia high school football, and we’ll finish it off with the state’s best defensive linemen.

We highlighted the running backs, then the wide receivers, followed by the tight ends in Week 1.

There are thousands of standout football players in Georgia, and these lists are not intended to be comprehensive! Use the comments section to discuss the other defensive linemen worthy of fans’ attention in 2021.

Pictured above is Johns Creek’s Alexander “TA” Cunningham, the top-ranked sophomore defensive lineman in the nation.

Columbus is home to one of the top defensive linemen in the country in Williams, who racked up 17 sacks for Hardaway as a junior. He committed to USC in June, but he’s taken a couple visits to both Auburn and Georgia recently. Wherever he ends up, he’ll be a player who arrives with plenty of fanfare.

Georgia has climbed to No. 1 in college football’s national rankings, and those who have watched the Bulldogs play this year know the defense — especially the defensive line — has been key to the team’s success. West has the potential to be one of the next great defensive linemen for Georgia. Listed at 6-foot-3 and 280 pounds, the senior tackle has started since his freshman year for Tift County.

Miller is one of the best players in the state, regardless of position, and he plays on one of the best defensive lines in the country. The Saints boast three players along their D-Line who will play for a Division I team in college, and Miller has been the most sought-after of them all. The 6-foot-5, 285-pound defensive tackle’s top schools are Georgia, Ohio State and USC, and he plans to announce his decision Jan. 8 at the Adidas All-American Bowl.

When Smith steps on a football field, he’s always one of the tallest and most athletic players out there. The Georgia commit is a 6-foot-6, 225-pound defensive end who uses his height and strength to wreak havoc on opposing offenses.

White is another Division I pass rusher out of Cedar Grove. The Memphis commit uses his 6-foot-5, 275-pound frame to bully offensive linemen and get in the backfield at a consistent rate.

Up in north Georgia a few miles away from North Carolina is Rabun Gap-Nacoochee, which plays in the North Carolina Independent Schools Athletics Association. The school is home to Agu, a 6-foot-6, 225-pound edge rusher who flipped his commitment from Notre Dame to Vanderbilt in June.

Josephs is a 6-foot-3, 215-pound linebacker/defensive end who is one of North Cobb’s small army of Power Five recruits. He’s elite when lining up along the defensive line and getting to the quarterback, and he can more than hold his own when dropping back in coverage as a linebacker. Kentucky, Michigan, Penn State and more are recruiting the senior.

Standing 6 feet 3 inches tall and weighing 285 pounds, Hixon fits the bill for a defensive tackle and does everything coaches want from that position. The senior committed to South Carolina in July over Georgia Tech, Virginia and Wisconsin, among others.

Strength is a given for the 6-foot-2, 315-pound senior, but he also has impressive speed for someone his size, which allows him to line up anywhere along the defensive line. He’s currently being recruited by Auburn, Miami, Mississippi State, Tennessee and more.

Lockett is a 6-foot-6, 325-pound defensive tackle for Westlake. The senior chose to stay close to home and play for Georgia Tech next fall over offers from Florida State, Ole Miss and more.

The junior, ranked No. 1 overall in the Class of 2023, racked up 21.5 sacks as a sophomore, making him the reigning sack king in the state. “His play speaks for itself,” Milton head coach Adam Clack said.

Madden, who goes by “C.J.,” committed to Georgia in September after decommitting from Colorado in June. At 6-foot-3 and 239 pounds, Madden is a hybrid between a linebacker and lineman. However you want to label him in terms of a position, he’s an elite edge rusher who flies to the ball.

Watson, who plays defensive end and linebacker, made what Panthers head coach Daniel Williams called “probably the biggest play in (Langston Hughes) history” with a chase-down tackle just short of the goal line that sealed a win over rival Westlake. The 6-foot-3, 220-pound senior holds offers from Kennesaw State, Stetson and Bryant.

A five-star junior in the 247Sports composite rankings, Burley finished with a team-high 11 sacks as a sophomore in 2020 playing for the Class 5A state champions. The 6-foot-5, 265-pounder holds offers from some of college football’s top programs, including Alabama, Clemson, Georgia, Michigan and Ohio State.

One of the top juniors in the state, Hardy leads the defensive line for Macon’s Tattnall Square Academy. At 6-foot-5 and 235 pounds, he’s also athletic, coordinated and skilled enough to make plays at tight end for the Trojans.

Harris is a 6-foot-4, 237-pound pass rusher who can line up with a hand in the dirt or standing upright. Once a Florida State commit, the junior reopened his recruitment in June and is considering the Seminoles along with Florida, Ohio State and others.

From the same school that sent five-star defensive lineman Travon Walker to Georgia in the Class of 2019, Upson-Lee has another rising star in this junior. The 6-foot-5, 250-pounder holds offers from Florida State, Georgia, Georgia State and South Carolina.

One of the top players for a North Gwinnett team that consistently churns out Power Five talent, McDonald is a prototypical defensive tackle with extraordinary abilities. The 6-foot-3, 325-pound junior has received offers from Georgia, Ole Miss, North Carolina State and more.

Ranked the No. 1 sophomore defensive lineman in the nation by 247Sports, Cunningham is a player to keep close tabs on over the next couple of years. Since Dec. 26 of his freshman year when he received his first offer from Georgia, 35 other Division I teams have joined the race for his talents. The amount and caliber of schools currently recruiting the 6-foot-6, 265-pound sophomore suggest he has a great chance to be a game changer in college and the potential to play on Sundays.

Only a sophomore, Brown-Shuler already has offers from Georgia, Michigan, Penn State, Tennessee and more. Listed at 6-foot-5 and 250 pounds before reaching the age of 16, the Pace Academy defensive tackle is one to keep an eye on over the next couple of years — and possibly many more.