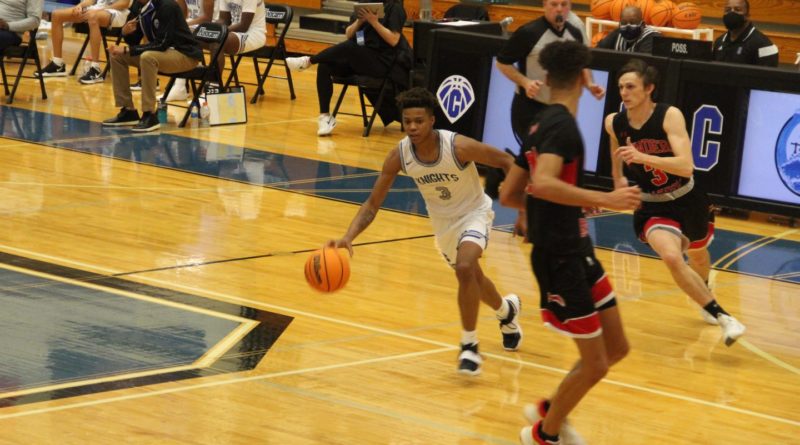 NORCROSS, Ga. — Though Georgia’s high school football season is heating up as the stretch drive for the state playoffs approaches, the basketball season is right around the corner.

With the official beginning of preseason practice less than a week away, representatives from teams throughout one of the state’s hoops hotbeds gathered Tuesday at Norcross High School for the annual Gwinnett County Basketball Media Day to discuss the upcoming 2021-22 campaign.

The event was one of the many casualties of normalcy from a year ago, when the COVID-19 pandemic was at its height.

There were plenty of storylines to go around Tuesday, especially involving some of the county’s top state contenders in their respective classifications.

The only state champion from last year, the Hebron Christian girls, graduated four senior starters from the team that finished 29-2 and captured the program’s first title.

Despite those big losses, as well as five other seniors, the team has plenty of new young talent, as well as a few experienced hands like the only returning starter — 6-foot-2 post Jessie Parish — plus fellow seniors Malia Melton and Kennedy Truitt.

Head coach Jan Azar is trying to put the building blocks in place for the future in a similar manner to the way she built a dynasty at Wesleyan, another Gwinnett private school she guided to 571 wins and 13 state titles over 22 years.

“We graduated nine (seniors from last year), and six went on to play in college,” Azar said. “Jessie started last year. Malia got some playing time off the bench last year. Kennedy’s coming back from injuries. She got a little bit (of playing time) here and there toward the end of the season, but has a lot less experience than (the other two) have.

“But leadership-wise, I feel like we’re definitely on the right track. They were all three part of that initial season when I came in (2019) and started the tradition and what we want to build at Hebron. So I feel very comfortable about the leadership that we have coming back trying to maintain what we’ve been able to build.”

Greater Atlanta Christian (15-8) is back with key starters like Xavier signee Kayleigh Addie and fellow seniors Jaci Bolden and Molly Pritchard after a near-miss as Class 3A runner-up.

But one of the more intriguing storylines on the girls side involves Buford (29-1), whose only loss came in a quarterfinal in its first season in Class 6A.

As impressive as that feat was, it represents a much earlier exit than coach Gene Durden’s Wolves have become accustomed to after having made 11 state Final Four appearances, including winning eight titles over three classifications, over the past 13 seasons.

Durden says it wasn’t adjusting to the loaded competition in the new, higher classification that was the problem as much as the team’s execution last year.

And with important players coming back like senior forwards Tamori Plantin and Tatum Ozment, plus sophomore guard Ava Grace Watson, who earned an invite to the USA Basketball U16 National Team trials over the summer, Durden says his Wolves don’t intend to change what they do much.

They just want to do it better.

“You know, (Class) 6A was a very big challenge last year,” Durden said. “6A was probably the best classification in the state of Georgia with (three-time defending champ) Westlake moving down (from 7A) and all the (talented) 5A teams moving up. So definitely, it was a tougher state run.

“We learned we have to do a little bit better with zone execution on offense, but in whatever classification we’ve played in, we’ve tried to step up to those challenges. And we’re going to still try to do that this year.”

Berkmar (25-6) comes into 2021-22 with a hunger similar to that of Buford’s girls after coming up just five points short of Milton in the Class 7A state title game last season.

And like the Wolves, the Patriots’ plan is to stick to a similar game plan this season, only execute it better behind 6-10, 227-pound Ole Miss commit Malique Ewin, as well as fellow seniors and Division I college prospects Jameel Rideout and Jermahri Hill in the backcourt.

Berkmar will get a stern early test with a rematch against Milton in the Atlanta Hawks-Naismith Holiday Classic showcase in early December, but Ewin knows they will face a challenge every night in a rugged Region 7-Class 7A, which is enough to whet the Patriots’ appetite.

“It’s definitely going to be big for us this year going against those matchups in our region every Tuesday and Friday night,” said Ewin, who recently announced his commitment to Ole Miss out of more than a dozen Division I offers. “But I think we’ll be ready for them, and our goals are still the same. We know what we’ve got to do to get where we want to be.”

Along with Ewin, there will be no shortage of strong teams and individual talent around the boys ranks in Gwinnett County this season.

Just as intriguing will be a handful of new coaches at county programs who could help make an immediate impact.

Benjie Wood returns to Buford to guide the Wolves, and will have some big shoes to fill after Hall of Fame coach Eddie Martin announced his retirement as a head coach, and eventually took an assistant job at Mill Creek.

“I just have to be me,” said Wood, a 1990 Buford grad who came back to his alma mater in May from Cherokee Bluff, and has accumulated 447 wins coaching boys and girls teams at five stops in his career. “I can’t pretend like I’m anybody else. We’re going come in and we’re doing everything we can to establish our culture. We’re going to play really hard and play together.”

Another intriguing new coach in Gwinnett is Mark Wright, who served as an assistant for last year’s Class 6A state champion Wheeler, and will bring that experience to Brookwood.