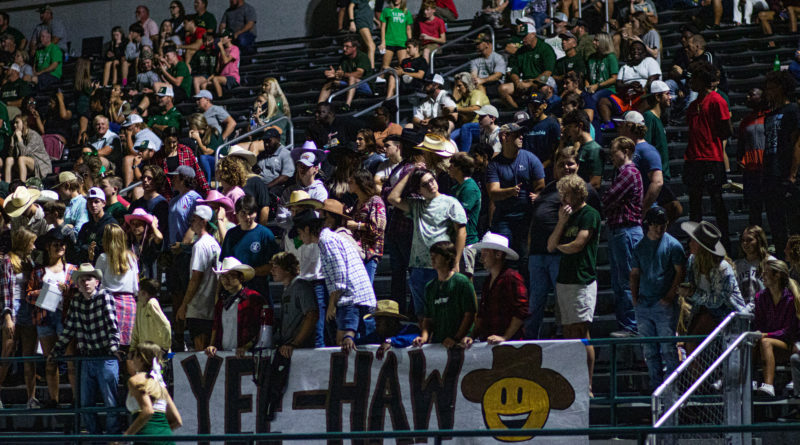 Ware County scored the win of the week by getting off to a fast start and then hanging on against previously No. 2 Warner Robins.

And Cambridge makes its Top 25 debut after surging for one of the most thrilling wins of the season, a 48-47 overtime victory over Johns Creek.

Collins Hill remains undefeated after beating North Gwinnett 35-7 on the road in a Thursday game.

Walton trailed by one score late in the second half, but North Cobb quarterback Malachi Singleton led the offense to pull away with a 51-29 win.

Milton had a bye in Week 9 and will face Roswell on Friday in a huge rivalry game.

Buford pulled off its third shutout in a row as the Wolves beat Shiloh 37-0 in Week 9.

Mill Creek shut out its opponent for the first time this season with a 56-0 win over Mountain View.

Lee County opened up region play with a 29-9 win vs. Houston County in Week 9.

Quarterback Thomas Castellanos led Ware County to a three-score lead before his team fended off a Warner Robins comeback, winning 29-21.

Colquitt County beat Camden 34-31 in an overtime thriller in Week 9.

Warner Robins came of a bye week flat, falling behind big against Ware County and not being able to catch up.

Creekside notched their third shutout of the season, beating Banneker 41-0.

Langston Hughes had a bye in Week 9 and will face Lovejoy this Friday.

Jefferson had a bye in Week 9 and will face Chestatee on Friday.

Brookwood’s defense looked rock-solid of a bye week in a 28-6 win over Newton.

Walton had some good spells on offense but couldn’t stop North Cobb in a 51-29 loss.

Parkview was about to tie it up after two long fourth-down conversions as the game was coming to a close, but Grayson held on and won 28-21.

Westlake had a bye in Week 9 and will face North Atlanta this Friday.

Rabun County shut out Banks County 63-0 on the road in Week 9 behind another huge game from quarterback Gunner Stockton.

Calhoun’s offense could not be slowed down as the Yellowjackets dismantled Woodland 52-6.

Benedictine ran its winning streak up to six with a blowout win over South Effingham, 56-7.

Trinity Christian had a bye in Week 9 and will face Brookstone on Friday.

Oconee County had a bye in Week 9 and will face Monroe Area on Friday.

Cambridge overcame a deficit to Johns Creek to score one of the most entertaining wins of the season, sealing the one-point victory by blocking an extra-point attempt in overtime.

Woodward Academy shut out its opponent for the second time this season, beating Drew 42-0.