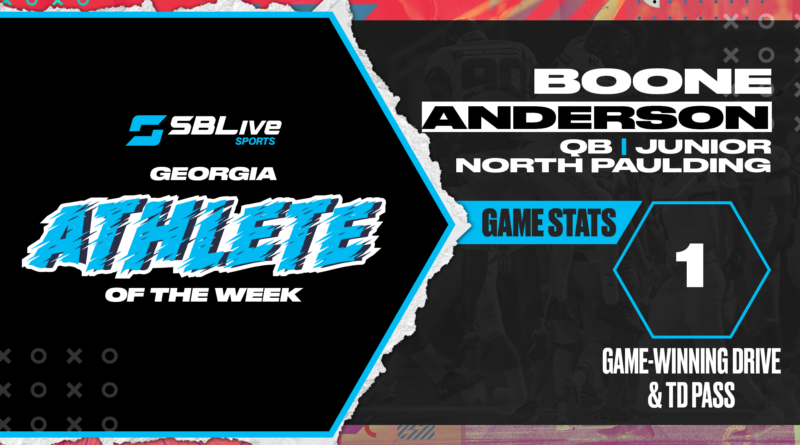 Congratulations to North Paulding quarterback Boone Anderson for being voted SBLive’s Georgia High School Athlete of the Week for Oct. 4-10!

The junior led an 80-yard drive as North Paulding trailed Marietta 42-38 with two minutes remaining in the game. He finished the drive with the game-winning touchdown pass to wide receiver Jeremiah Ray with 17 seconds left on the clock to secure North Paulding’s 45-42 win.

Boone received 52.11% of the vote, beating out East Forsyth’s Cadence Alberty who finished second with 43.3%. There were over 29,000 votes tallied this week!

Dunn had seven kills, a solo block and two block assists vs. Harrison in the match that determined if Mt. Paran would play in the Cobb County championship. Mt. Paran won it all, beating Allatoona in the title match.

Archie was 13-of-18 with 226 yards passing and three touchdown passes in a win over Campbell.

Smith had an interception vs. Osborne as Kell led 6-0 late in the third quarter. The INT shifted the momentum in Kell’s favor as the Longhorns went on to win 26-0.

Castorri was 3-for-3 with a double, a triple, four RBIs and two runs as Buford notched a victory over Lanier.

Hughes threw four touchdown passes in the first half and rushed for a score in the fourth quarter in a 45-42 loss to North Paulding.

Leonard had a one-handed interception and rushed for a touchdown on Calhoun’s ensuing offensive drive in a win over Blessed Trinity.

Moskowitz rushed for 136 yards and a 71-yard touchdown on 12 carries vs. Etowah.

Rehman, a center, did something most offensive linemen only ever dream about doing as he recovered a fumble in the end zone for a touchdown in a win over Jenkins.

Roper did all of the scoring for Adairsville in a 20-10 win over Coahulla Creek as he rushed for two touchdowns and returned a kick 85 yards for a score.

Tremmier kicked two PATs with her twin sister, Abagail, holding in a 20-17 overtime win over Model.

Hyatt rushed for four touchdowns in the first half, finishing the game with 202 yards rushing and five total touchdowns while recording 12 tackles on defense in a 42-14 win over Callaway.