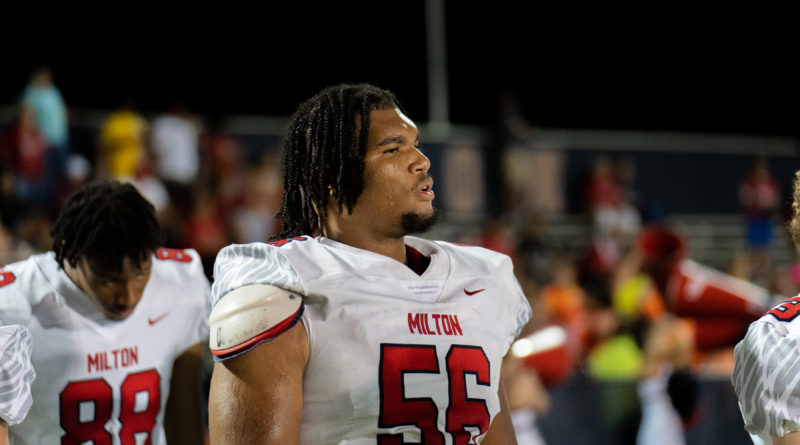 This is the last week where we’ll be taking a position-by-position look at some of the top players in Georgia high school football, and we’ll kick it off with the state’s best offensive linemen.

We highlighted the running backs, then the wide receivers, followed by the tight ends in Week 1.

Week 2 started with the top quarterbacks, turned next to the defensive backs and then the linebackers.

There are thousands of standout football players in Georgia, and these lists are not intended to be comprehensive! Use the comments section to discuss the other offensive linemen worthy of fans’ attention in 2021.

Pictured above is Milton’s Mo Clipper Jr. (photo by Josh Major), who’s committed to play for Tennessee next season.

One of the top offensive linemen in the country, the Columbus native committed to Alabama in September. The 6-foot-6, 280-pound tackle helped pave the way to a 10-1 finish for Carver in 2020 with over 2,100 rushing yards and 30 rushing touchdowns as a team.

The college offers began piling up for this 6-foot-5, 318-pound lineman following his freshman season, beginning with teams like LSU, Alabama, Michigan and Oklahoma. In August, Nichols wrapped up a lengthy recruitment by committing to Tennessee.

The Florida State commit leads the offensive line for one of the top teams in the state. Sapp is a versatile lineman who stands at 6-foot-5, 320 pounds and can play tackle or guard. He chose the Seminoles over offers from Florida, Georgia and more.

Shor began his high school career at Denmark and returned to the school for his senior year after spending one year at IMG Academy. The Alabama commit received a bevy of Power Five offers before eventually settling on the Crimson Tide.

Gibson played on the defensive line as a freshman before switching sides and using his size and strength on the offensive line. The Georgia Tech commit has been a three-year starter at right tackle for a Johns Creek team that’s gone 19-8 during that period.

The Tennessee commit leads one of the deepest offensive lines in the state. In addition to Clipper, the Eagles have three other starters on the line with Division I offers, and one of them is also on this list.

Nahmias leads the offensive line for a run-heavy Marist team. The Duke commit didn’t pick up his first college offer until after his sophomore season, but that changed with good news from multiple Power Five schools.

One of two South Carolina commits on this list, Mains is a 6-foot-5 tackle. The senior out of Forsyth County chose to play for the Gamecocks over Michigan State and Tennessee, his other top schools.

Henry leads the offensive line for one of the top teams in Class 7A. The senior South Carolina commit is listed at 6-foot-7, 295 pounds and primarily plays right tackle for the Raiders.

As a freshman, Flynn saw time at center and guard for a Grayson team that finished 14-0 and won the 7A state championship. The 6-foot-1 sophomore has received offers from several Power Five schools, including Arkansas, Florida State, Georgia, Kentucky and Ole Miss.

The 6-foot-4, 315-pound center leads the offensive line for the defending Class 7A state champions. Originally committed to Georgia Tech, Scroggs flipped his commitment to Georgia right before the start of his senior year.

Brunswick is home to one of, if not the best offensive linemen in south Georgia. Charlton is a senior Florida State commit with over 20 Power Five offers.

Coming in at 6 feet 6 inches and 340 pounds, Phillips will take his talents to the Big Ten to play for Michigan State next fall. He committed to the Spartans in November of his junior year.

The small town of Sandersville 60 miles east of Macon is home to this Miami Hurricanes commit. Believe it or not, Carswell didn’t begin playing football until this year — his senior year — but he received offers from the likes of Miami, Ole Miss, Oregon and more this spring before playing a down of high school football.

The 6-foot-7 tackle is of the top-rated junior linemen in the country. Hughley committed to Georgia in late September.

Arguably the top uncommitted lineman in the state as a junior, Sanker has received offers from Auburn, Georgia, Oregon and more over the spring and summer. Since the season started, he has added Coastal Carolina and Mississippi State to his growing list of options.

The 6-foot-6, 286-pound tackle from Macon has offers from Florida State, Georgia, Georgia Tech and a handful of other Power Five teams as a junior.

The second of two Carver players to make this list, Smith is one of the top junior linemen in the nation. He’s played multiple positions on the offensive line for the Tigers, and he’s currently being recruited by Georgia, Ole Miss, Oregon and more.

Calhoun caught the attention of college coaches early. Real early. He received offers from Georgia and Tennessee before playing a single down of high school football. Since taking the field for the Knights, the sophomore has picked up offers from teams such as Michigan, Oklahoma and Florida State.