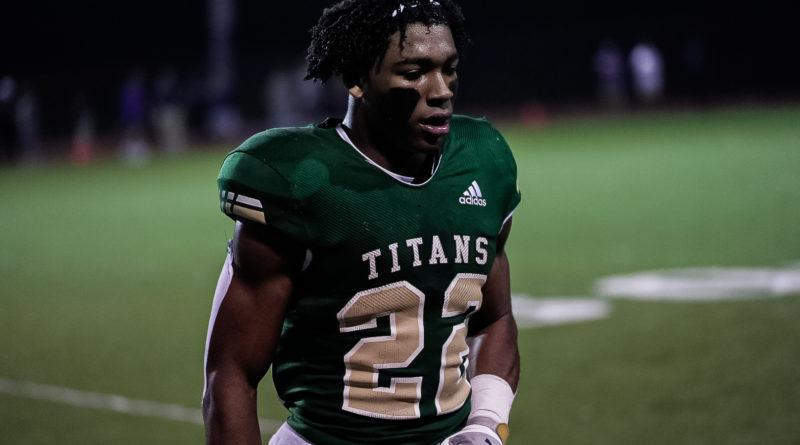 Pictured above is Blessed Trinity running back Justice Haynes, who rushed for 154 yards and two touchdowns Friday night in a loss to Cartersville.

Haynes rushed for 154 yards and two scores even after sitting out the first few offensive drives. His absence wasn’t due to injury, but head coach Thomas Hall would not disclose with reporters why his star running back sat out early in the game, according to the Atlanta Journal-Constitution.

Trailing 17-7 at the half, Kennesaw Mountain took the lead in the second half thanks to a 5-yard rushing score and a 40-yard touchdown pass, both coming off the arm and legs of Prangley in a 21-17 win over Pope.

Johnson scored two touchdowns on defense and rushed for another in a 48-0 shutout of Stone Mountain.

Warrington caught seven passes for 153 yards and three touchdowns in a 76-34 win over Greenbrier.

Sanders rushed for four touchdowns in a 70-13 win over Northview as first-year head coach Kevin Hill gained his first win.

Walker threw for five touchdowns and rushed for another as Chamblee beat East Forsyth 55-7.

Henderson threw for one score and rushed for three in a 34-24 win over Hiram, securing Cass’ first trip to postseason play since 2006.

Lonergan was 13-of-23 for 214 yards and one touchdown while rushing for another score in a 28-6 win over Newton.

Anderson was 11-of-15 for 225 yards and two touchdowns while rushing for two scores in a 76-34 win over Greenbrier. Anderson led Clarke Central’s offense to its highest-scoring game in program history.

Mullix scored the only points for Newton after recovering a fumble at the 2-yard line and diving into the end zone in a 28-6 loss to Brookwood.

Smith rushed for three touchdowns and a successful two-point conversion in a 51-29 loss to North Cobb.

Graham, a sophomore, opened up the game with a 60-yard rushing score. His touchdown was the only one Fayette County scored all night in a 24-7 loss to Riverdale.

As Johns Creek was set to tie the game up at 48-48, Morley blocked the extra-point attempt to secure Cambridge’s 48-47 overtime win and keep its undefeated season alive.

The sophomore recorded the only touchdown reception for Grayson vs. Parkview in a 28-21 win.

Walling passed for 254 yards and two touchdowns in a 45-28 win over North Paulding.

Morris took an interception back for a touchdown with less than five minutes remaining in the game to secure Lambert’s 26-7 win over North Forsyth.

Swann connected with wide receiver Joel Stahl twice in the fourth quarter to overcome a 13-0 deficit as Cherokee won 14-13 over Etowah.

Journey rushed for three touchdowns, leading the offense to a 56-0 shutout victory over Mountain View.