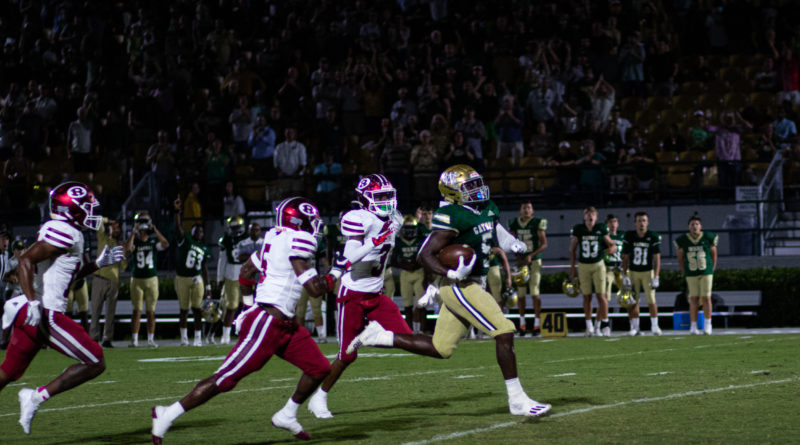 WAYCROSS, Ga. — Ware County leaned on an aggressive approach early and a stout defense to deal Warner Robins its first loss of the season.

The Gators’ air attack was firing on all cylinders throughout the game and keyed the 29-21 victory, Ware County quarterback and UCF commit Thomas Castellanos said.

“Hitting them through the air (was key),” Castellanos said. “We started off early and hit them in the mouth. I think that’s what got us going really good early on. They were big and physical up front, so to open up the run game, we had to throw it in the air.”

“(Castellanos) has grown so much as a football player, as a person and teammate,” Strickland said. “He’s so doggone smart. A lot of people don’t realize this, but he calls all of our protections and a ton of our plays. He’s got free rein to choose what we do; that’s how much trust we have in him, and it’s a rare situation when he’s wrong. He is a special, special talent.”

Castellanos connected with tight end Landon Dean on a 7-yard touchdown pass during the first drive of the game.

After a Warner Robins punt, Castellanos threw a 77-yard strike for a touchdown to running back Cartevious Norton on Ware County’s next offensive drive.

A Warner Robins punt was blocked and recovered by a Ware County defender in the end zone for a safety, and Ware County kicker Henry Bates knocked a short field goal through the uprights.

After one quarter, the Gators had a three-score lead.

Bates added a 47-yard field goal in the second quarter to make it 22-0.

Warner Robins (6-1) put points on the board for the first time of the night on the last play of the first half, with only two seconds on the clock.

Warner Robins quarterback Christon Lane connected with wide receiver Deuce Petty, who lateraled back to running back Malcolm Brown, and Brown was off for a 59-yard touchdown to end the half and give Warner Robins some momentum.

But the third quarter went scoreless for both teams.

Trailing 29-7 after a 5-yard rushing touchdown from Norton in the fourth quarter, Warner Robins wide receiver Jafredrick Perry scored on a 47-yard rush, and Brown scored his second touchdown of the night on a 7-yard rush with just a minute left in the game.

Warner Robins had cut the deficit to one score, trailing 29-21.

However, it was all over when Warner Robins attempted an onside kick but was unable to recover it, and the Demons’ defense was powerless to stop Ware County from running out the clock.

Going forward, Castellanos said humility and attention to detail are what he and his team need to focus on.

“We’ve got to do the little things, stay focused and not get too cocky,” he said.

Defensively, Strickland was excited to have linebacker Trey Hargrove back after losing him to an injury in the first game of the season.

“He’s our best defensive football player,” Strickland said. “He’s such an emotional component to what we try to do; not having him for a few weeks kind of left a big hole in us defensively. Getting him back has changed who we are defensively.”

Strickland gave a lot of credit to his offensive line for Ware County’s success throughout the game.

“Our offensive line had a big challenge ahead of them, and those guys really took pride in that,” he said. “The whole group just played really spectacular in pass protection and being able to run the ball to close it out.”