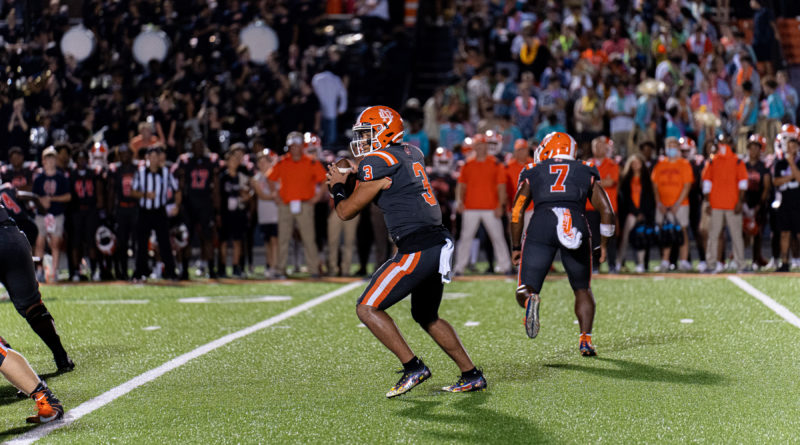 Ware County became the first team this season to slow down Warner Robins’ offense, and North Cobb blitzed Walton in a game that was up-and-down for a while.

North Cobb (photo by Josh Major) appears poised to take the No. 2 spot behind Collins Hill, while the Gators from Waycross should make a big leap from No. 23 after consecutive wins over Top 25 opponents.

Collins Hill extended its win streak to eight with a victory Thursday over North Gwinnett, and the seven points are the most the defense has allowed in its last five games.

Warner Robins failed to complete the comeback after being down by double digits early on at Ware County.

North Cobb extended its streak of scoring 40-plus to six games while improving to 2-0 in region play.

Milton had a bye and will face rival Roswell next week.

Buford advanced to 6-1 after completing its third shutout in a row.

Mill Creek earned its first shutout of the year, while the offense scored a season high in points.

Lee County slowed down Simeon Askew and Houston County’s run game enough to come away with the victory.

The Hurricanes improved to 7-0 after putting up their second-most points this season.

Colquitt County rallied to beat Camden County in a thriller.

Walton fell to 1-1 in region play after allowing a season high in points.

Creekside has allowed only seven points in its last four games and has put up 200 points in that same span.

Langston Hughes had a bye and will face Lovejoy next week.

Jefferson had a bye and will face Chestatee next week.

Lowndes gets a big win over region rival Tift County.

Grayson edges out another narrow victory. The Rams’ last four wins have all been by 10 points or fewer.

Westlake had a bye and will face North Atlanta next week.

Rabun County goes to 7-1 and now has four games scoring 59 or more points and is averaging 48 points per game behind quarterback Gunner Stockton.

Calhoun gained its seventh win while handing Woodland its seventh loss on the season, scoring over 50 for the fourth time.

Benedictine was three points off of scoring its season high and held its third opponent to single digits.

Trinity Christian had a bye and will face Brookstone next week.

Oconee County had a bye and will face Monroe Area next week.

Ware County handed No. 2 Warner Robins its first loss of the season after limiting the Demons’ high-powered offense to a season-low 21 points.

The War Eagles jumped out on Arabia Mountain early and maintained their lead throughout.

Woodward Academy flexed its muscles against Drew with a resounding shutout Thursday.