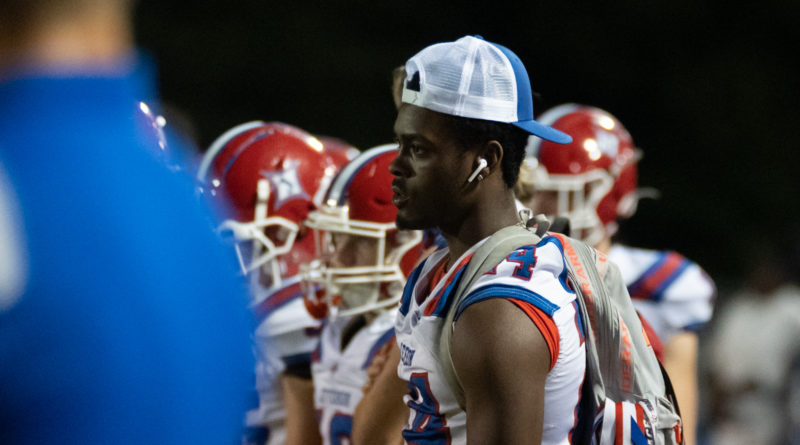 We kicked off this week with the top quarterbacks, turned next to the defensive backs, and now we’ll finish the week with the linebackers.

There are thousands of standout football players in Georgia, and these lists are not intended to be comprehensive! Use the comments section to discuss the other linebackers worthy of fans’ attention in 2021.

Pictured above is Jefferson’s Malaki Starks (photo by Jamie Spaar), who’ll be playing for the Georgia Bulldogs next season.

The 5-foot-11 Barker is a hard-hitting linebacker who shows intelligence in the classroom and on the field. In both 2019 and 2020, he had 150-plus tackles to lead the state. He is one of the leading generals on the Norcross defense and has 87 tackles (26 for loss) through seven games this year. He is committed to play for East Carolina next season. “As a coach, Zakye takes on every challenge and adjusts the defense to the offense’s game plan,” head coach Keith Maloof said. “He plays at such a high level and constantly terrorizes other offenses. Every team we play has always said that ‘we have to look out for No. 33.'”

Starks, a future Georgia Bulldog, can line anywhere on the field and produce. He is one of the best athletes in the class of 2022 who can line up at quarterback for the triple option, running back, safety and linebacker. He has quickness and a nice burst from his track and field background to get across the field. His quick hip swivel allows him to cover receivers and stick with them all over the field. Starks will lower his shoulder pads and deliver a hit, but his strength and power will only increase when he gets in the weight room with a college strength coach.

Georgia recruiters have been working hard to bring in four- and five-star linebackers each year, and they have done so in their home state in the class of 2022 with Starks and Washington. Washington is expected to play middle linebacker in college, but he can also play defensive end and running back. He shows great speed in pursuit of the quarterback and the ball skills in pass defense, and he has the power to run over defenders when playing running back. The 6-foot-1, 215-pounder aims to increase his ability to read and react to what is in front of him once he’s playing for the Bulldogs.

Willis’ ability to diagnose plays before the snap is excellent, and he’s a top-notch tackler. Willis can cover in man-to-man or zone, and he’s shown an affinity to blitzing outside instead of inside, which will change once he works with defensive coordinator Andrew Thacker at Georgia Tech next year. He makes big plays in coverage and blitzing to apply heavy pressure on the quarterback to mess up his rhythm and timing.

Westmoreland, a South Carolina commit, is a fundamental linebacker who plays downhill and will lower his shoulder pads to push you backward. He can line up on the defensive line, at inside linebacker or outside linebacker, and has a quick first step to get around most guards. He is very good with his hands, as he can put on a spin move and swipe his opponent’s hands down, which allows him to make a play in the backfield. Westmoreland was recently committed to Georgia, but he decided to head to South Carolina, where he is expected to make an immediate contribution on defense.

Ever since he stepped on the Marietta campus, Martin has put up successful numbers on offense and defense. In his sophomore season, he showed his playmaking skills at linebacker, and he’s continued to do so as a junior and senior. Martin is also an excellent receiver, amassing 896 yards receiving and eight touchdowns in 2020. He has been heavily recruited by the top schools in the nation and is still unsure where he will take his talents.

Lightsey is a force on the field for Fitzgerald and will be a problem for the rest of the SEC when he’s a Florida Gator. He’s quick, explosive, agile and plays downhill. Lightsey was getting recruited by schools such as Georgia Tech, Florida, Florida State and LSU. Lightsey shows impressive closing speed in pursuit, especially when the ball is in the quarterback’s hands to make forced fumbles, tackles for loss and sacks. Florida defensive coordinator Todd Grantham and linebackers coach Christian Robinson will love having Lightsey because of the relentlessness and energy he brings to the field.

Virginia is getting an athlete who can play both sides of the ball, but he mainly takes snaps at inside linebacker. Bracey is 6 feet, 200 pounds and doesn’t have tremendous closing speed like some of the other linebackers on this list. However, Bracey will lower his shoulder pads and knock you backward, and he shows quickness lining up at middle linebacker or when he is on the line.

Efford is another two-way player (linebacker and running back). Being recruited by Georgia Tech to play linebacker, Efford shows tremendous power at the position. He is 6-foot-2, 225 pounds and plays big. You will often see him line up on the outside, which allows him to show off his strength when running backs try to pick him up, and he blows them up in the backfield and gets to the quarterback. He has great hands to shed defenders, can break down well against mobile quarterbacks, and shows relentless pursuit of the ball.

Payne, a 6-foot-2, 180-pound linebacker, recently committed to Kansas State after visiting a game against Southern Illinois. He was thoroughly impressed with how things went and chose the Wildcats over Boston College and Vanderbilt. Payne can play linebacker or defensive back, but he’s expected to play the “jack” position at Kansas State like his Georgia counterpart, TJ Smith. Payne has great coverage skills in man-to-man and zone defenses, which is where he can show off his ability to read and react to the ball.

Grayson went undefeated and won the state championship in Class 7A last season, and Farrar (7), a 6-foot-1, 205-pound linebacker, had a significant impact on the Rams’ championship run. He finished the season with 7½ tackles for loss, two sacks and one interception. He’s been a tackling machine this season, racking up 90 with 10 of them for loss through seven games. Farrar is looking to help Grayson peak during the playoffs this year and is committed to play for Appalachian State next season.

Jones is a 6-foot-2, 200-pound linebacker who has a quick step off the line, and his pursuit of the ball is excellent. Jones has several schools looking at him, such as Minnesota, Mississippi State and Wisconsin, who could potentially put the offer on the table for him as he continues to impress on the football field. Georgia Tech has offered Jones, as the Yellow Jackets continue to try to build that linebacker spot by adding Efford as well.

Lowndes has one of the fastest linebackers in the class of 2022 in Hunter, a 6-foot-4, 200-pounder who also take snaps at receiver. His length gives him an advantage on offense, and on the defensive side of the ball he shows agility, quick burst, speed and the ability to pursue the ball anywhere on the field. Hunter has nine offers on the table including Louisville, Kansas, Cincinnati, Ole Miss, Syracuse and West Virginia.

Aguirre transferred to Whitewater from Cedar Grove, and the 6-foot-1, 220-pound junior linebacker has been increasingly on Power Five schools’ radar, such as Florida State. Aguirre has also been lining up at the slot position on offense this season, and his coaches love the way he can run routes. However, he is also lining up at running back and fullback to move the chains in short-yard situations. He primarily takes snaps at inside linebacker because of his ability to fill the gaps, stop the run and read and react to plays in front of him.

Smith was a tremendous talent from the start of his freshman year, with multiple offers that included Georgia. Smith has excellent closing speed, filling the gap before the running back gets there; he is always in the right place and the right time to make deflections and tackle well. Smith several schools continuing to monitor his progression on the field, including Colorado. He is an essential part of the Buford defense and the Wolves’ hunt to get back to a state championship.

Crayton is a junior on the rise. In his freshman year, he played safety because of his athleticism, but before his sophomore year, he moved to linebacker and he’s been a force at that position. The 6-foot-3, 212-pound backer had 62 tackles and five sacks as a sophomore. In addition to Crayton’s linebacker duties on the defense, he also takes snaps at running back. To improve his speed at both positions, he has been running track to work on top-end and closing speed while pursuing the ball.

The last name may sound familiar: Godfrey is the son of Randall Godfrey, a Georgia linebacker who earned SEC freshman of the year in 1992. Now his son is making a name for himself playing the same position. Grant Godfrey, who lines up at outside linebacker, shows excellent ability to pursue the ball, form tackling, and has the speed to blitz the outside and make plays in the backfield. The junior is 6-foot-3, 205 pounds and ranked as a four-star prospect.

Brown is a triple-sport athlete, competing in track and field and wrestling, both of which help his skills on the football field as he’s become arguably the best sophomore in the state at any position. He has speed, strength, agility and quickness to play linebacker while also taking snaps at running back and quarterback. His speed and strength allow him to burst through holes and blow up the running back and quarterback. He suffered a leg injury in Jefferson’s last game against Cedar Shoals, but he’s expected to be back before the playoffs begin.

Ty Anderson is 6 feet, 200 pounds, and he can tackle. His pursuit of the ball and speed are excellent. He plays running back and linebacker and produces at both positions, but he primarily lines up at middle linebacker. Anderson already has 87 total tackles, 12 tackles for loss and nine sacks in seven games in his senior year. He has offers from Cincinnati, Louisville, Georgia Tech, Indiana, Wake Forest and South Carolina.

Opposing offenses need to game plan around Hill because the 6-foot-2, 215-pounder can make plays all over the field. He can blitz from the inside and outside, drop back into coverage and stick with receivers and has excellent ball skills to snag interceptions. Through six games in his senior season he has 75 tackles, three sacks and eight tackles for loss.