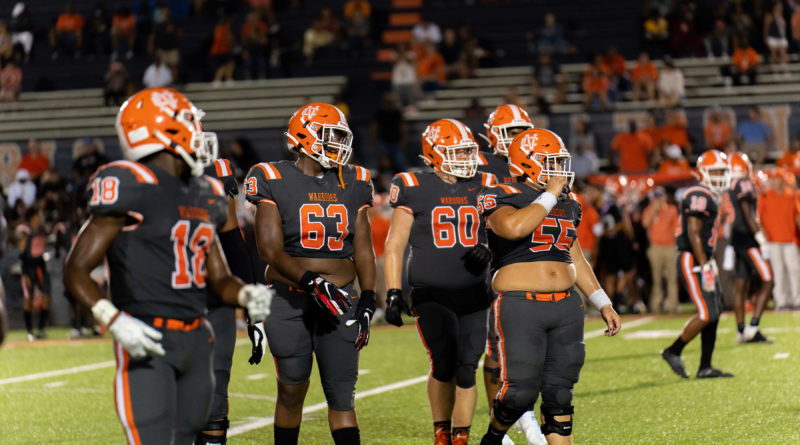 Warner Robins and North Cobb are on the brink of being nationally ranked along with Collins Hill, but road wins Friday will be a must.

Region play is in full effect, and teams are jockeying for that top spot as they head toward the playoffs.

South Forsyth is on a five-game winning streak since its season-opening loss, and after an overtime thriller last week against West Forsyth, the War Eagles are riding high. They have figured out a formula, and that formula consists of a heavy dose of quarterback Ty Watkins. With 1,000 passing yards, 15 total touchdowns and no turnovers, he is a big factor in South Forsyth’s success. Gainesville is hoping its bye week can help the Red Elephants regroup from their 37-28 loss to Lambert. Prior to the loss, during their four-game win streak, their defense was holding opponents to 12 points per game, while their offense was scoring 35 points per game.

Camden County has had an inconsistent season. In the Wildcats’ four wins, they are averaging 45 points per game, but in their losses their offense goes flat, averaging only 19. Three of their last four games have ended in losses, with their last one being a 77-34 blowout defeat to Warner Robins. The good news for the Wildcats is that this week starts region play, and while they have a tough opponent in front of them, this is the best time to right their wrongs and get back on track. Colquitt County is averaging 53 points per game in its last four, and quarterback Neko Fann is leading the way with 1,284 yards, 19 touchdowns and only two interceptions.

Pope and Kennesaw are 1 and 2, respectively, in 6A Region 6. Pope is 4-0 in region play thus far, and the Greyhounds are outsourcing those opponents 134-58. A win over Kennesaw Mountain on Friday would put them firmly in the driver’s seat. Kennesaw Mountain is 4-1 in region play. The Mustangs’ first loss came last week, by two points to South Cobb. The Mustangs will need a great game from Cayman Prangley and his dynamic duo of receivers, Jailen Taylor and Savion Riley, if they want to win and keep Pope from running away with the region.

This is a big region game for both opponents. North Forsyth is 3-1 in 7A Region 6. The top of the region is crowded, with Denmark and South Forsyth both undefeated in region play, so the Raiders can’t afford any region losses at the moment. While Lambert has five wins, both of its losses have come in region play. The Longhorns are 1-2 in the region, and in order to pull themselves out of the ditch they dug, they will need a big game on Friday from quarterback James Tyre, who leads the Longhorns in total yards.

Lowdnes has come up with some big-time wins this season, including the Vikings’ thriller last week against Cedar Grove. Their two losses have come by a total of nine points.The Vikings look to keep their momentum and increase their win streak to four games. They will need big games from quarterback Jacurri Brown and pass rusher WC Fulton, who has 8.5 sacks on the season. Tift County is coming off a disappointing loss to Valdosta in which the Blue Devils scored only three points. Their defense played a great game in giving up only 16 points, but if the Blue Devils are aiming to avoid a two-game losing streak, their offense will need to wake up.

Cambridge has one of the best defenses in the state, boasting three shutouts in five games and allowing only 33 points in the other two. Johns Creek’s lone loss came in the second game of the season, and since then the Gladiators have won four straight and are averaging 40 points a game in their last three. The Gladiators look to stay hot, and hope to do what no other team has done so far this season — overcome Cambridge’s stout defense.

Newton looks to have a better performance on Friday after narrowly escaping Parkview last week. The Rams are having a great start to their year record-wise, but three out of their five games have been determined by fewer than seven points, and two of those ended in wins. The Rams have shown the capability to create and hold big leads and will need to do that against a good region opponent in Brookwood. The Broncos have two losses on the season, one of which came against consensus No. 1 Collins Hill in the season opener, plus a two-point loss to North Paulding. When they win, it is in convincing fashion behind the arm of one of the state’s best quarterbacks in Dylan Lonergan. With 1,800 passing yards, 18 total touchdowns and only two interceptions, Lonergan and the Broncos’ offense is a handful for any defense.

Cartersville appears on pace for another deep playoff run. Offensively and defensively, the Hurricanes are hitting on all cylinders. In six games, they have scored 211 points while only giving up 80. The Hurricanes have the offensive firepower to score big when needed, but their defense has held their opponents in check. In five of their six games, their opponents either scored in single digits or didn’t surpass 14 points. Cartersville’s defense will have a tough task this week trying to slow down Blessed Trinity and star running back Justice Haynes. The Titans came back from an early two-game losing streak to start a three-game winning streak — until their five-point loss last week to No. 19 Calhoun. The Titans look to get back on the winning side of things, and also some redemption from their forfeit loss to Cartersville last season.

Warner Robins crushed Camden County 77-34 last week. The Demons showed their full array of weapons, with Christon Lane throwing for 350 yards and four touchdowns and Malcom Brown and JaFredrick Perry combining for almost 300 rushing yards and four touchdowns. They have yet to score fewer than 48 points in a game, and they are averaging 66 points in their last two games. Ware County is coming off its most impressive victory of the season in beating Coffee 35-3. The Gators have the firepower on offense, featuring star quarterback Thomas Castellanos, to compete with anybody, but they will have to put on their best performance to match Warner Robins’ dynamic offense.

North Cobb has been stellar since its season-opening loss to Buford. The Warriors have won five straight and have averaged 40 points per game in that stretch while allowing only 12 points per game. Quarterback Malachi Singleton has been a huge factor in the Warriors’ success, with 1,200 passing yards, 20 total touchdowns and no turnovers. Walton doesn’t have a player exceeding 500 yards in any statistical category, but the Raiders just find a way to win. Defensively and offensively, they are sound and play mistake-free football. The Raiders have big wins over Lowndes and Roswell, and their lone loss was to West Forsyth.

There is too much great Georgia football to stuff it all into just 10 games. Here are 10 more solid matchups in Week 9: