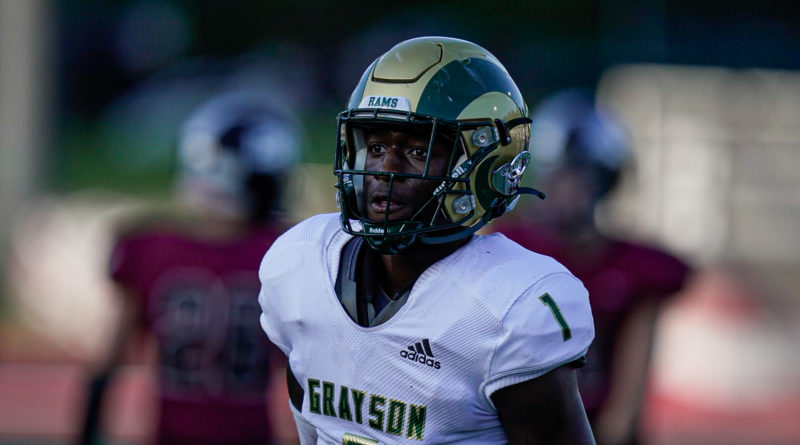 We kicked off this week with the top quarterbacks, and now it’s the defensive backs’ turn.

There are thousands of standout football players in Georgia, and these lists are not intended to be comprehensive! Use the comments section to discuss the other defensive backs worthy of fans’ attention in 2021.

Pictured above is Grayson’s Mumu Bin-Wahad (photo by Josh Major), who’ll be playing for West Virginia next season.

VOTE NOW: WHO’S THE BEST DEFENSIVE BACK IN GEORGIA?

Georgia will be happy to have Marquis “Deuce” Groves-Killebrew playing for the Bulldogs next season. While playing only six games in his junior season at Brookwood due to injury, Groves-Killebrew was dominant, mainly on the defensive side of the ball. He has excellent ball-location skills and athleticism to give himself a chance to win 50-50 balls in the air, and he can also return kicks and play wideout. Now finishing his high school career at North Cobb alongside fellow defensive back Andre Stewart, they have been harassing offenses all season in 2021.

Stewart is a physical cornerback who plays fast and fundamentally sound. He’s an excellent tackler in the open space and has quick feet to stay with receivers, like his counterpart Marquis Groves-Killebrew. Stewart recently de-committed from Auburn in favor of Kentucky to continue his academic and football career there in 2022.

Receivers have a hard time getting the inside foot on Rhym, and they have a hard time getting any yards on him if he allows them to catch a ball. He can lock up in man-to-man defense, in zone coverage and come off the edge and blow up plays in the backfield. Rhym accumulated offers from just about every team in the SEC, but he’ll be an LSU Tiger next season.

Allen, a 6-foot-2, 175-pound athlete, is one of the most highly recruited cornerbacks in Georgia. The four-star recruit models his game after Jalen Ramsey, aiming to lock down an entire side of the field on his own. He has quick feet to break on the ball, excellent size and leaping ability to compete for jump balls and vision while the play is developing. He’s committed to play for North Carolina in 2022.

Cull is a 5-foot-11, 175-pound cornerback who usually is the fastest person on the field. His speed and aggression allow him to make plays all over the field. Not only is Cull talented in coverage or blitzing from the corner, but he can also line up in the backfield at running back and showcase his speed and vision with the ball in his hands. Cull is committed to play for Lane Kiffin at Ole Miss.

Miller became a focal point for the Creekside defense during his sophomore and junior seasons. In his first game as a senior, he helped Creekside to what many viewed as a big upset win over Grayson, but it hasn’t turned out to be an upset, as the Seminoles have kept racking up wins. Miller has shown that in the open field, he can make tackles and is not afraid to lower his shoulder and deliver a big hit. The three-star recruit remains uncommitted.

Jackson is a pure cornerback for ELCA who can also return kicks, play receiver and even run the ball as a wildcat quarterback. The 5-foot-11, 175-pounder has excellent agility and footwork to keep up with anyone in different coverages. He chose Boston College over Northwestern, Duke, Virginia, Miami, Georgia Tech, Michigan State, NC State, Minnesota, Nebraska, UCF and Vanderbilt.

Collins is one of the more physical cornerbacks in the class of 2022. A tall cornerback at 6-foot-1, he likes to jam receivers with one strong punch and get them off balance while running their route. He can come downhill and deliver big hits. Collins has great fundamentals, allowing him to play fast and clean. Collins is committed to Mississippi State, where he will continue to develop his skills at the Division 1 level.

D’Icey Hopkins makes his presence felt on the field wherever he lines up. His physical play and aggressive nature make him unafraid to bring the hard hat on anyone bigger than him. He doesn’t give up on plays and excels going up for 50-50 balls. Hopkins will join Shawn Elliott’s Georgia State program next year to play presumably at safety.

Floyd lines up most often at safety for Hillgrove, but he occasionally plays on offense as a receiver. He does a great job of reading the quarterback’s eyes to lead him to be in the right place at the right time and making open-field tackles when necessary. He comes up to stop the run and is not afraid to get in there and tackle bigger players. The 6-foot-2, 165-pound senior will be heading to South Carolina next year.

Pope does it all for Buford. He can play offense, defense and special teams, but defense is where he’s likely to find his home playing for Alabama next season. He uses his speed to make great tackles in the open space, shed blocks to make tackles, and he hits hard. Pope is the leader of a loaded defense who’s made a number of big plays as a senior, including a pick-six against Clarke Central to seal the game on the final play.

Spencer started at linebacker as a junior for a Buford team that was 13-1 and won the state title, but the 6-foot-2, 192-pounder is a natural at safety. His speed allows him to blow up plays in the backfield, and he has shown impressive hands in coverage. Spencer held offers from all the major conferences, but he chose Michigan State to continue his academic and football career.

Clinkscales is a 5-foot-9, speedy athlete with great agility and quick feet who can play all over the field, from running back to special teams to cornerback. He’s expected to primarily play the latter in college. Teams may try to target Clinkscales’ side because of his height, but he can hold his own even with taller receivers. Boston College is getting an all-around athlete next year.

Downs is the No. 8-ranked junior prospect in the nation and No. 1-ranked safety. He’s been a human highlight reel for Mill Creek this season, setting the school record for career interceptions with a season and a half left of high school eligibility. By next season, the ball-hawking, hard-hitting Downs will probably get to choose any college program he wants.

Carter is the biggest safety on this list at 6-foot-4, 200 pounds, and he might even end up playing linebacker in college if he puts on some more weight. He plays downhill and fast and has great vision to sniff out plays before they fully develop and get tackles for loss. The three-star athlete was heavily recruited by Clemson, Florida State, Mississippi State, Penn State, Michigan, Tennessee, Louisville among many others, but like fellow safety Malik Spencer, he chose Michigan State.

Jones comes to play every week, and it doesn’t matter which side of the ball he lines up on. Jones is 6-foot-1, 185 pounds and shows great versatility in switching from the receiver and safety positions. He has great hands and athleticism, and like teammate Quavian Carter he can deliver the big hit. Jones will lower his shoulder, and he usually wins the battle if you get in his way. Jones is committed to Virginia Tech.

Lining up at safety, Wooden’s ability to react when the ball is in the air or on the ground is impressive. He can come downhill and make open-field tackles, shed blocks, or get around blockers to make tackles. He has excellent hands and has made many quarterbacks pay for trying to go deep on him. Wooden is committed to Auburn and got recruited by Tigers defensive coordinator Derek Mason.

West Virginia is getting an athlete next year for their football program in Bin-Wahad, who shows every week why he is going to a Division 1 school. The 6-foot, 180-pound senior excels in man-to-man coverage and zone coverage. He’s also an excellent tackler who wins most of 50-50 balls in the air, especially when teams try to throw fade routes on him.

A Minnesota commit, Bryson is a 6-foot-2, 190-pound defender who lines up mainly at free safety for Rabun Gap-Nacoochee. He transferred from Tuscola as a junior and excelled on both sides of the ball — as a running back and DB.  He’s been committed to PJ Fleck’s Minnesota Golden Gophers since March.

Before suffering an ankle injury against Peachtree Ridge, Hunter was piling up catches, yards and touchdowns as a receiver, but his skills as a defensive back are what made him the No. 1 senior prospect in the nation. “He’s just extremely intelligent on both sides of the ball, not to mention the best athlete I’ve ever coached,” Collins Hill coach Lenny Gregory said.