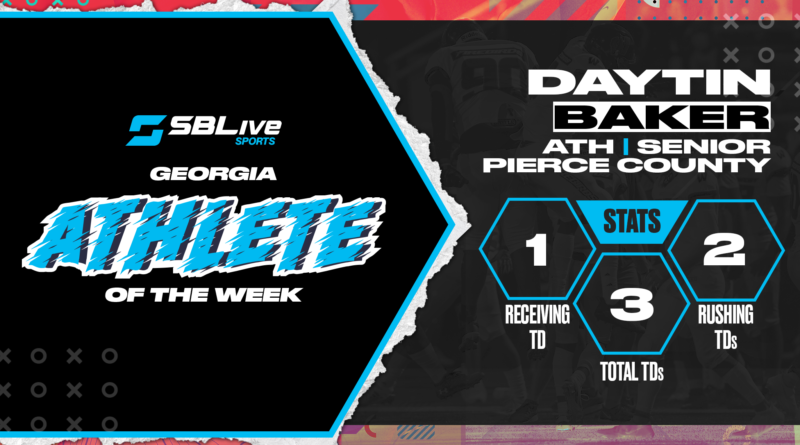 The senior scored all three of Pierce County’s touchdowns in a 28-21 loss to Rabun County. Baker rushed for two touchdowns, including a 58-yard burst, and he recorded a 62-yard touchdown reception.

Baker received 55.9% of the vote, beating out East Forsyth’s Cadence Alberty who finished second with 39.07%. There were over 40,000 votes tallied this week!

Alberty went 3-for-3 with a two-run home run, an RBI triple and an RBI single. She pitched the entire game, striking out eight batters in a 10-1 win over Dawson County. This marks East Forsyth’s first region championship win in school history.

Anderson forced a North Gwinnett safety to give Mill Creek the lead in the third quarter after trailing 14-13 at halftime. Mill Creek went on to win 36-17 to remain undefeated.

Brown rushed for 172 yards and two touchdowns in a 77-34 thrashing of Camden County.

Credle rushed for 206 yards and four touchdowns vs. LaGrange. One of his scores was a 94-yard rush.

Mitchell caught only three passes vs. South Effingham, but they were all touchdowns, and he finished with 162 yards receiving.

Oliver intercepted two passes and returned a kick for a score vs. Paulding.

Perry struck out 10 batters in five innings vs. Tucker, 12 batters vs. Mount Pisgah and nine batters vs. King’s Ridge.

Speer returned two punts for touchdowns vs. Hiram. He took the first one back 70 yards and the second 85 yards.

Thompson caught two passes for touchdowns and blocked a kick — his sixth blocked kick of the year — vs. Chattahoochee.

Tookes had a touchdown reception and an interception, which he took back 81 yards for a score vs. Westlake.