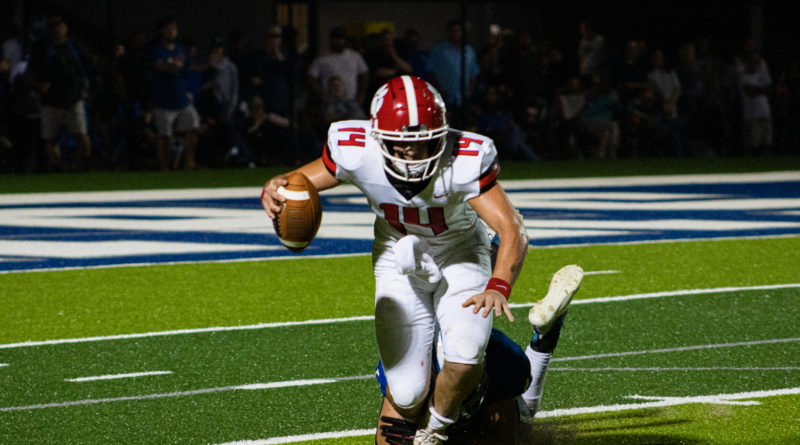 We’ll kick off this week with the top quarterbacks.

There are thousands of standout football players in Georgia, and these lists are not intended to be comprehensive! Use the comments section to discuss the other quarterbacks worthy of fans’ attention in 2021.

Pictured above is Rabun County’s Gunner Stockton (photo by Zach Edmondson), who’ll be playing for Georgia next season.

After leading Collins Hill to the state championship game in his junior season, Horn has been even better as a senior in leading one of the most dynamic offenses in the country. A Missouri commit who also plays baseball, Horn has the height and arm strength colleges seek in a quarterback. He can make all the throws and excels at play action. His excellent use of touch and pace on the ball makes him stand out from the rest of the quarterbacks in his class.

Swann is a 6-foot-2, 200-pound quarterback who had an impressive junior season, throwing for 2,149 yards and 21 touchdowns, and he’s kept up his high level of play in his senior season. Through six games he’s thrown for 858 yards and 10 touchdowns. Swann has committed to play for Maryland next season.

One of the top dual-threat quarterbacks in the nation, Farrell even has the athleticism to play defensive back. After throwing for 1,812 yards as a junior and racking up 13 touchdowns, Milton has improved all facets of his game as a senior, beating the opposition with his arm and his legs. Farrell will be playing for Virginia Tech next season.

Rozsman is a 6-foot-3, 210-pound quarterback who is mainly a pocket passer. Leading a run-dominant offense, Rozsman is always willing to do anything to earn his team a win, and he excels as a goal-line runner. He’s committed to play for Appalachian State next season.

Like Horn, Archie is a dual athlete who also plays baseball. With the ability to throw 93 mph on the mound, those throwing skills transfer well to the football field. Displaying excellent pace on the ball, touch on the ball when going deep, short and to the corners, Archie is extremely accurate. He’s looking forward to furthering his football and baseball career at Coastal Carolina.

Brown is one of the best athletes at the quarterback position in this year’s senior class. He boasts a strong arm and can make any throw, but he also has strong legs and a good sense of when to abandon the pocket and run. Brown started his senior by nearly mounting an amazing comeback against Walton in the Corky Kell Classic, and he recently led Lowndes to its fifth straight win over Valdosta in the Winnersville Classic. The Miami Hurricanes will be excited to have Brown on their team next year.

Morris is an exceptional passer when he can square his feet and let it rip down the field. But there’s more to the 6-foot, 175-pounder’s game than just staying in the pocket and getting the ball down the field, as he’s also a very effective runner. The ability to scramble when plays break down makes him one of the more unique dual-threat quarterbacks in the class of 2022. He’ll be playing for North Carolina State at the next level.

Stockton is a solidly built QB who can drive the ball downfield and deliver solid and aggressive throws to anyone at any level of the field, and even when defenders get to him, he’s hard to bring down. He’s been putting up video game numbers this season, throwing for 1,879 yards and 25 touchdowns through six games. The University of Georgia should be happy to be getting a homegrown kid with the size and makeup to contribute right away.

Geriner has all the skills you want in a quarterback, but what stands out is his quick thinking throughout his progressions. He has a knack for throwing to the right receiver, and when he can’t find his man, he has excellent running ability. He’s the leader of a Benedictine offense that’s been tough to slow down this season, throwing for 1,451 yards and 12 touchdowns through six games. He’ll be an Auburn Tiger next season.

Johnson is a junior quarterback who loves to throw downfield, and he isn’t afraid of trying to sling the ball into tight windows. At 6-foot-2, 200 pounds, he’s also tough to bring down when he’s on the run. Johnson has also shown he can plays make while scrambling or inside the pocket, and he’s likely to get even better as a senior next year.

Coming off a tremendous junior year, the 6-foot-3, 200-pound Daniels committed to Stanford over the summer. He’s an athletic quarterback who excels when plays break down, using his quick thinking to identify blitzes and then find his receivers or improvise. Daniels not only has shown his ability to throw, but he can also return kicks on special teams. The Cardinal will have a Swiss army knife on its hands in Daniels.

French is a pro-style quarterback who put up incredible numbers for Wesleyan before transferring to Blessed Trinity. French is considering a number of college offers, highlighted by Ole Miss, Arkansas, Tulane, Virginia Tech and Yale. “JC French has a great arm talent and can throw it in tight windows,” coach Tom Hall said. “He is a strong player who works hard in the weight room. Although we have not asked him to so far, he can keep teams honest with his feet as well.”

Smith is a bit undersized at the quarterback spot, but then so is Kyler Murray. Don’t let his size keep you from thinking he can’t sling the ball down the field. At the Cam Newton 7-on-7 competition in July, he led his team to the national championship in Arlington, Texas. In a big Week 7 game against River Ridge, the Toledo commit threw for 347 yards and four touchdowns in a 44-15 win.

Philo had big shoes to fill at Prince Avenue Christian, replacing the now-Georgia quarterback Brock Vandagriff as the starter. And the 6-foot-2 190-pound sophomore has been slinging it. Through six games he led the state in passing yards with 1,904, along with 21 touchdowns. In just his second start, Philo broke Vandagriff’s single-game record with 547 passing yards.

Lane holds the keys to what’s been possibly the best offense in Georgia this season. Through six games he’s thrown for 1,393 yards with 18 touchdowns and only three interceptions, and he’s also a weapon on the ground. Lane is an undersized quarterback at 5-foot-11, but he has a strong arm and a quick release.

Castellanos is a freakish athlete leading the high-powered Ware County offense. He beats defenses with his arm and legs, as the UCF commit amassed 1,300 passing yards with 12 TDs along with 405 yards yards and seven TDs through five games. He accounted for nearly 80 percent of Ware County’s offense as a junior.

In just his second year playing varsity football, Singleton is showing recruiters, college coaches and his competition what will be in store this season and next for North Cobb. Singleton is a solidly built 6-foot-1, 220 pounds who shows excellent fundamentals at the quarterback position. He loves to look for the big play, but when the big throw is there, he has the athleticism to outrun defenders and the power to run them over.

Lonergan is a junior quarterback who plays like a seasoned vet, and he has just about every program in the country seeking his services in 2023. He can sit in the pocket and deliver strikes to his receiver while taking a hard hit for his team. The 6-foot-2, 200-pound pro-style quarterback is also an excellent baseball player, and he’d like to play both sports in college.

The three-star Dallas is having quite the senior season for a Trinity Christian squad that’s been blowing out its opposition. Through six games he’s thrown 18 touchdown passes against only two interceptions, racking up 1,461 yards. The three-star quarterback will be playing for Western Michigan next season.