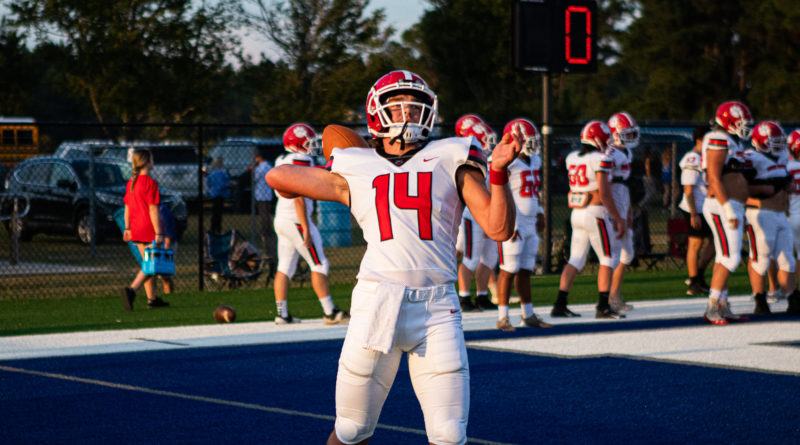 Ridenour capitalized on one of the two turnovers his defense forced vs. Sequoyah, taking a recovered fumble 66 yards for a score in the 28-0 shutout win.

Anderson took a kick return 84 yards for a score in a 34-27 loss at Miller Grove.

Haynes rushed for 244 yards and four touchdowns on 35 carries in a loss to Calhoun.

Roszman went 6-for-8 with 157 yards passing and a touchdown while splitting reps with quarterback Jeremy Hecklinski in a win at Hillgrove.

Spalding scored on a 52-yard interception return in a 34-27 win over Stephenson.

Leonard intercepted a pass with one hand and then rushed for his second touchdown on the ensuing offensive drive.

Morris led South Forsyth to a 30-24 overtime win over rival West Forsyth as he ran in the game-winning score on a 12-yard rush.

Perry caught two touchdown passes, one an 80-yard score and the other a 34-yard score, in a 45-42 loss to North Paulding.

Farrell finished 17-of-22 with 257 yards passing and four touchdowns, completing TD passes of 73 and 39 yards while rushing for a 53-yard score in a win over Etowah.

Anderson led the Wolfpack on an 80-yard drive down the field as they trailed Marietta 42-38 with two minutes remaining. Anderson hit wide receiver Jeremiah Ray for a 2-yard score with 17 seconds left in the game to seal the win.

Stockton broke the Georgia state record in total career touchdowns as he threw to Jaden Gibson vs. Grovetown for his 219th. He had three more TDs on the night and now sits at 222.

Davenport carried the ball 28 times for 181 yards and two touchdowns in a win over Cherokee.

Phillips, son of 2004 Olympic gold medalist Dwight Phillips Sr., scored twice on runs that were both over 75 yards vs. East Coweta.

Campbell kicked a 44-yard field goal late in the fourth quarter to seal a 38-35 win over Sprayberry.

Fountain threw five touchdown passes vs. East Paulding, three of which were 59-yard strikes or longer.

Taylor scored on an 18-yard run on a fourth-and-5 play and returned the second-half opening kickoff for an 82-yard touchdown in a win over Lithonia.

Thomas caught two touchdown passes and rushed for two more scores in a win over Jenkins.