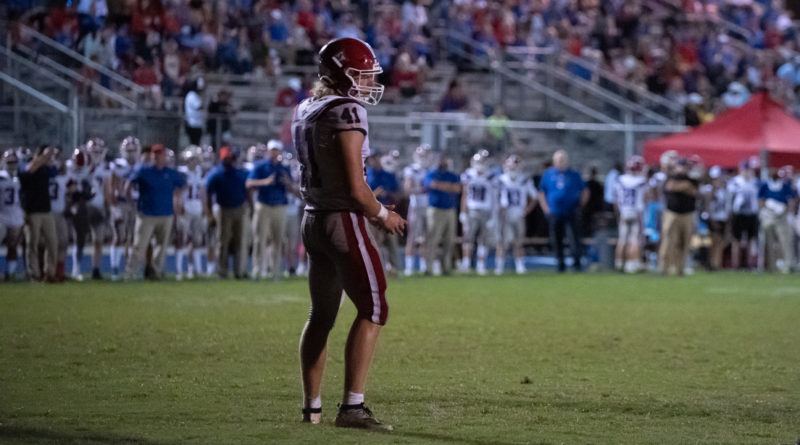 Lots of schools were on fall break in Week 8, and that reflected in a calm night in the Top 25.

Collins Hill had a bye and will play at North Gwinnett next week.

Warner Robins had a bye and will play at Ware County next week.

North Cobb outscored Harrison 28-7 in the first half and didn’t let up in the second.

Milton advances to 6-1 after handing Etowah its sixth straight loss of the year.

Buford had a bye and will host Shiloh next week.

Mill Creek had a bye and will play at Mountain View next week.

Lee County had a bye and will play at Houston County next week.

Alcovy scored first after forcing a turnover, but Colquitt answered immediately as quarterback Neko Fann got the offense going with a 50-yard touchdown pass and the rest is history.

One-loss Walton gave Hillgrove its fifth loss of the year after a strong first half that led to a decisive win on the road.

Creekside had a bye and will host Banneker next week.

After North Atlanta got the first touchdown, Langston Hughes scored 68 unanswered points in the Panthers’ most dominant performance of the year.

Jefferson’s star sophomore Sammy Brown suffered a right leg injury in the win; however, Brown told the Athens Banner-Herald he didn’t think it was “anything too bad.” He will undergo an MRI to assess the damage to his leg.

Cedar Grove led 38-35 going into the fourth quarter, but Lowndes pulled ahead after scoring a touchdown and a field goal to win.

Brookwood had a bye and will host Newton next week.

Grayson had a bye and will play at Parkview next week.

After Westlake’s first shutout win of the season, the Lions have outscored their opponents by a total of 140 points.

As Marietta was leading in the fourth quarter, the North Paulding offense marched down the field and quarterback Boone Anderson connected with wide receiver Jeremiah Ray for the game-winning touchdown with 20 seconds left.

In what looked like the game of the week, Coffee suffered its first loss of the year thanks to a dominant performance on both sides of the ball by Ware County.

Blessed Trinity running back Justice Haynes’ 244 rushing yards and four touchdowns weren’t quite enough as Blessed Trinity fell to 4-3 and Calhoun rose to 6-1.

Benedictine racked up all their points by the third quarter and put it in cruise control in the fourth.

Trinity Christian remains undefeated and ended non-region play with its highest-scoring performance of the year so far.

Woodward Academy had a bye and will play at Drew next week.

Hapeville Charter was beginning to make a comeback, outscoring Marist 14-7 in the fourth quarter, but it wasn’t enough.