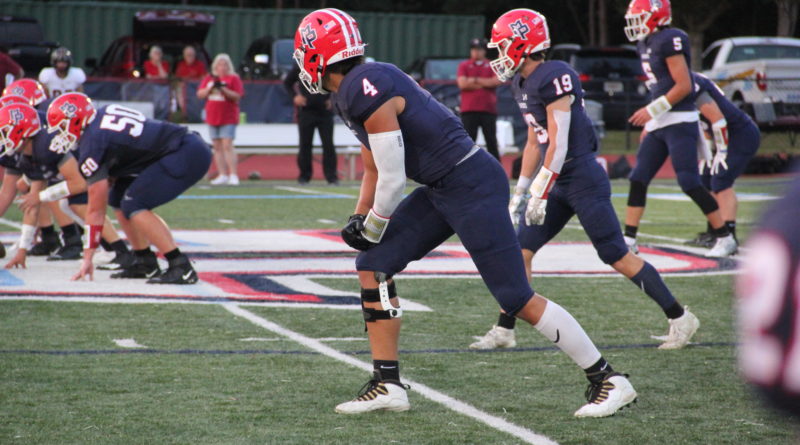 We started with the running backs, moved on to wide receivers, and now it’s the top tight ends’ turn.

There are thousands of standout football players in Georgia, and these lists are not intended to be comprehensive! Use the comments section to discuss the other tight ends worthy of fans’ attention in 2021.

Pictured above is Mount Pisgah’s Cole Spence (photo by Zach Shugan), who’ll be playing for Vanderbilt next season.

Johnson has very good height at the tight end position, coming in at 6-foot-5, 225 pounds, and he can play receiver as well. Johnson, all-state in 2019 and 2020, combines his superior size with an amazing pair of hands, and he can run after the catch. He’s always a key target when Oconee is knocking on the door in the red zone. Johnson is committed to LSU, where tight ends coach Don Yanowsky will be thrilled to work with him every day and help perfect his craft.

Luckie is an extremely athletic 6-foot-3, 225-pounder who helped Norcross to a 13-1 record and the state semifinals in his sophomore season. Luckie has already generated looks from Georgia Tech, Georgia, Arizona State, Arkansas and Florida State. In this season. He hasn’t had a lot of catches this season as teams have often double-teamed him, but he’s excelled as a blocker.  “Lawson is one of the hardest-working young men I have been around,” coach Keith Maloof said. “He shows up every day with the intent of mastering his craft as an H-Back. He always puts the team first and plays a crucial role in the success of our offense and team.”

At 6-foot-6, 230 pounds, Spence certainly fits the bill for a Division I tight end, and his game matches his imposing frame. He catches passes like a receiver and blocks defenders like a lineman, and he excels at both. “Cole has been an outstanding student-athlete his entire high school career,” coach Ryan Livezey said. “A three-year starter, Cole really came into his own last season starting at both TE and DE.” Spence might not be able to officially sign with Vanderbilt until December, but he said he’s locked in to playing for the Commodores.

Delp is one of the best route runners among this group of tight ends. He is a natural talent at the position who’s shown the ability to play well through the whistle, and his catching and running ability are both top-of-the-line. He’s one of the most highly sought-after tight ends in the country and has narrowed his list of college choices to Clemson, Michigan, South Carolina and Georgia.

Tight end is especially strong in the class of 2022 in Georgia, and Bennett Christian is one of the strongest. He’s 6-foot-6, 235 pounds, and he has all the tools excel not only in college, but in the NFL. He’s an excellent blocker who has great body control to catch the ball at its highest point. His big frame and the work he puts in at practice have allowed him to overpower defenders and open holes for his running backs. He’ll be taking his talents to Ohio State next year.

Staes is an athletic tight end with a basketball background, and that shows with his superior footwork. He’s 6-foot-4, 230 pounds and lines up like a big receiver who runs fluid routes, and once he catches it, he’s hard to bring down. Along with excelling at tight end, he can also play on the defensive line and has a quick first step to pressure the quarterback. Staes will be completing his academic and athletic career at Notre Dame.

Jim Harbaugh is looking forward to adding the athletic Klein to his program next year, and the 6-foot-6 tight end has been committed to the Wolverines for over a year. Although his route running still needs some work, he still gets open and makes plays. He’s an excellent blocker in the running and passing game. He’ll look to continue to improve his game under Harbaugh and Michigan tight ends coach Jay Harbaugh.

Just a sophomore, Collins has already gotten offers from Georgia, Georgia Tech and Central Florida. The 6-foot-4, 226-pounder is athletic enough to line up at wide receiver, but tight end will undoubtedly be his home in college. He has 163 receiving yards and a touchdown this season for 4-2 Rome.

Nickel is as fundamentally sound as they come at tight end. The 6-foot-4, 225-pounder isn’t particularly fast, but his superior route running seems to always leave him open. He has terrific hands and shows his strength as a pass and run blocker. Nickel showed college coaches early in his high school career why teams should offer him, and Michigan State won the Nickel derby.

Washington is one of the most versatile tight ends in the 2022 class who can catch, run and block. He recently committed to Arkansas over Cincinnati, UCF and many others. Washington is a beast on the line who routinely creates holes for his running back to get through, and he’s shown the ability to line up just about anywhere. He sometimes lines up at running back or wide receiver, but tight end is his home base.

You never know where the highlight will come from Perry. Whether he splits outside at receiver, lines up inside at tight end or even behind the center at QB, Perry is a 6-foot-5, 230-pound weapon wherever he plays. He’s an excellent pass catcher and route runner who has committed to play for Virginia Tech next season.

Dunn is one of the smaller players on this list at 6-foot-2, 215 pounds, and he’s sort of a tweener tight end/wide receiver. He has great hands and ball skills, but his route running could be cleaned up a bit. Coastal Carolina, Appalachian State and Charlotte are among the schools seeking Dunn’s services, and his position in college will probably depend on how much emphasis the program of his choice puts on him putting on pounds.

Between DJ Moore receiver and Andrew Lane at tight end, defenses have a lot to stress about when they play Archer. Lane is a big tight end who once took snaps at the quarterback position. He then made the switch back to tight end and has never looked back. He recently de-committed from Memphis, making him one of the biggest tight end targets in Georgia for more than one reason.

Cade Anders is a strong tight end whose biggest strength is his blocking. He gets clean-up blocks and routinely picks up blitzes for his quarterback to buy him some more time to get the ball down field. Anders doesn’t show the route-running skills of many others on this list, but he’ll get working on that as soon as he sets foot on Army’s field next season.

Ethan Davis is about as athletic as a tight end can get. He’s 6-foot-5, 200 pounds and has great ball skills, body control and feet, and he runs fluid routes to get open for quarterback Sam Horn. Davis is a four-star athlete in two sports — football and basketball — and holds offers in both from Florida State, Florida, Auburn, LSU, Georgia and Georgia Tech, among many others.