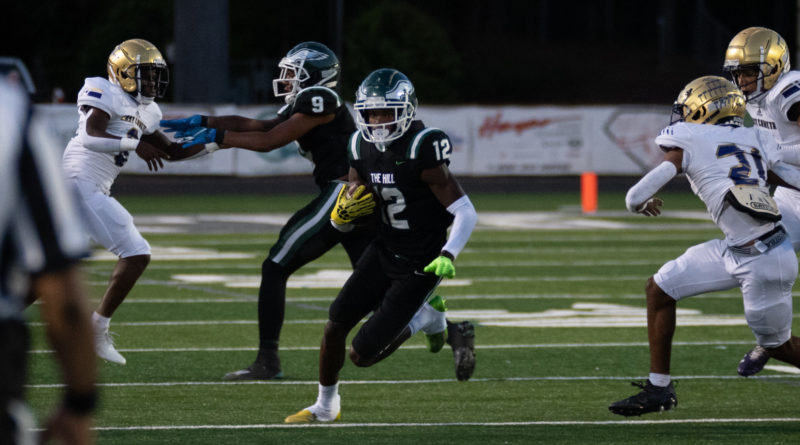 Our first list focused on the running backs, and next up are the wide receivers.

There are thousands of standout football players in Georgia, and these lists are not intended to be comprehensive! Use the comments section to discuss the other wide receivers worthy of fans’ attention in 2021.

Pictured above is Collins Hill’s Travis Hunter (photo by Jamie Spaar), the No. 1-ranked senior in the country who suffered an ankle injury Oct. 1, but the injury isn’t as bad as was originally feared.

The No. 1-ranked senior in the country came into the season with high expectations, and he’s exceeded them, especially on the offensive side of the ball. After a 1,500-yard season as a junior, Hunter picked up right where he left off in his first game as a senior, catching 13 passes for 232 yards and two scores, plus made an interception on defense (and he even threw a touchdown pass). “He’s a special dude,” Collins Hill coach Lenny Gregory said. “His football IQ is like he’s a coach on the field. When he comes over on the sidelines, he’s telling us what to do, what the other team is doing and what we need to run. He’s gotta be the highest-IQ football player I’ve ever coached; he’s the best football player I’ve ever coached.”

Playing alongside Travis Hunter and having Sam Horn throw you the ball is a pretty nice spot to be in as a wide receiver. Pedro shows great body control, ball location, catching ability and speed, and like Hunter, he also can play defensive back. His athleticism and talent make him a key piece to the offense and defense for the top-ranked team in Georgia. He’ll be playing college football for Marshall.

Antwi is 6-foot, 190-pound outside receiver with an uncanny ability to get separation. He can also line up in the slot, which allows him to fit various personnel groups coaches draw up. He has pure speed that allows him to outrun safeties when he gets the ball in his hands, making him a yards-after-catch machine. He hasn’t been putting up huge stats his senior year, but he’s been committed to Ohio State since July.

Bouie is a picture of versatility. He can play quarterback, the inside and outside receiver spots and defensive back. Despite missing his entire junior year after tearing his ACL and MCL, he had such strong freshman and sophomore years that he already got on Division I coaches’ radar. He has elite ball skills, can create separation and wins most of the 50-50 balls thrown his way whether playing offense or defense. He’s committed to Texas A&M, where he’s expected to play defensive back.

Bonner is a physical 6-foot-2, 195-pound receiver playing on a stacked offense that includes quarterback Austin Smith and athlete Rashod Dubinion. He mostly plays outside, where he excels in one-on-one matchups. Bonner was highly recruited by most of the Power 5 schools, but he elected to stay home and play for Georgia Tech. Bonner and his fellow Cedar Grove are looking to reclaim the 3A state title before finishing their high school careers.

One of A.J Swann’s primary targets in the passing game is the 5-foot-10, 155-pound Harshaw, who’s one of the fastest receivers in Georgia. He uses his speed to get separation and is an excellent route runner. Harshaw’s speed doesn’t just translate to the football field. He’s a dual athlete who shines on the track as well. He’s run under 10.9 three times, including a 10.78. This speedy dual athlete will continue to compete in college for Utah as he works to perfect his craft.

Moore is one of Archer’s top receivers, alongside Frank Osorio. In Moore’s junior season he accumulated 21 catches with 379 yards for five touchdowns, and through six games he’s at similar marks. The chiseled 6-foot-1, 190-pound wideout will stay close to home to continue his academics and play football for Georgia Tech.

Size and wingspan are the 6-foot-4 Holloway’s primary commodities at wide receiver, but he’s also an excellent route runner. He doesn’t have any flashy head fakes or various moves to get opponents off balance. He makes one cut and gets up field using his speed and uses his length to out-jump opponents. Holloway will be playing at the next level at Virginia Tech.

Bond is a part of a squad loaded with players who have multiple offers from Power 5 schools. The 5-foot-10, 175-pound receiver’s speed stands out on a team that’s loaded with it. The four-star receiver is widely considered to be one of the fastest players in the nation, and he’ll be taking his talents to the Florida Gators next season.

Having Malachi Singleton to sling you the ball is a bonus when you’re deep down field looking to score. Morrissette is a big receiver and has a big catch radius, which makes him extremely hard to cover. He can catch balls at their highest point and has tremendous power, which he often shows off with some vicious stiff-arms. Georgia fans should be excited to see Morrissette playing for the Bulldogs next season.

On the other side of Morrissette is Samuel Mbake, who is the taller of the two highly ranked receivers. Mbake thrives in jump-ball situations, and usually has a size and athleticism advantage over his defenders. Besides being an excellent receiver, Mbake is also known for his blocking. He hasn’t yet made his college decision but is considering a number of SEC and Pac-12 schools.

Bryan took the lead in receiving yards in Class 4A after he exploded for 212 yards and a score on 15 catches in Benedictine’s thrilling win over Ware County. The 5-foot-11, 175-pound slot receiver’s play this season has turned his college recruitment up a notch, recently getting an offer from Central Michigan.

Despite being 6-foot-5, Macneill uses his speed to blow past defenders. He isn’t much for flashy moves and has a knack for finding open spaces in the middle of the field, and also is known as an excellent blocker in the running game. Macneill has committed to play college football for the Rice Owls.

The 6-foot-2, 190-pound senior is a player the defense always has to account for. His size and speed make it tough for defensive backs to contain him, especially when going for the long ball. Thompson has been a big part of Pebblebrook’s 5-0 start, in which he’s caught 18 passes for 245 yards and four touchdowns. He’ll be playing at the next level for Coastal Carolina.

Webb plays fast and fundamentally primarily as an outside receiver, but the 6-foot-3, 190-pounder can line up on inside as well. He’s enjoying a strong senior season, amassing just under 600 yards and 11 touchdowns through six games. He’ll be playing college football for East Carolina.

Speer decided to stay in his home state for college and join Kirby Smart’s Georgia Bulldogs. Speer is 6 feet, 185 pounds, and his combination of speed and power makes him one of the explosive receivers in the Peach State. Speer is looking to improve his route running while adding some more muscle by the time he gets to Georgia next year.

Griffin is a dual athlete who shines bright under different lights. He’s an impressive wide receiver and DB on the football field, using his big 6-foot-5, 200-pound frame to give quarterbacks quite a target. Griffin also excels on the basketball court. In his senior season he has 243 receiving yards while leading his team to a 4-0 start.

Walker is a 6-foot-2, 180-pound speedster. In his career at Warner Robins, he has tallied over nearly 1,500 receiving yards on 89 catches. Walker has been a key factor in Warner Robins’ dominant offense this season, including racking up 10 receptions for 232 yards and two touchdowns in a 56-38 win over Lee County.

This future Florida State Seminole is an explosive, athletic athlete at 6 feet, 175 pounds. Hill can line up inside or out, and although his route running isn’t as advanced as some receivers, he uses his speed and leaping ability to grab the ball at its highest point. He can also play running back. As the season progresses, Hill will be reminding coaches and scouts why he is going to a Power 5 school.

Turner can play out of the wildcat formation, at running back, in the slot or at outside receiver. He is small but explosive so running the wildcat option works because Turner is able to fit through small holes then use his speed to get free and score. The 5-foot-10 Turner has nine touchdowns and 309 yards receiving through five games. It’ll be interesting to see how Louisville chooses to deploy Turner at the next level.