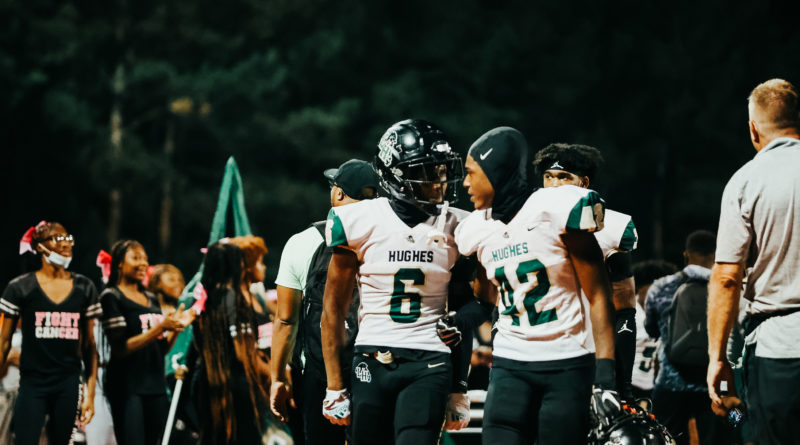 Collins Hill scored a blowout win over Peachtree Ridge in Week 7, but the gasp of the game came in the first quarter when do-everything wide receiver/defensive back Travis Hunter went down with an injury.

Early reports speculated that the injury would be season-ending, but si.com reported that Hunter suffered a high-ankle issue and is expected to be out four to six weeks.

Camden County was the latest team that had no answers for Warner Robins’ offense, as the Demons cruised to a 77-34 win.

North Cobb had a bye in week 7 and will face Harrison on Friday at home.

After getting off to a slow start, Milton advanced to 5-1 after a 55-27 rout of Alpharetta.

Mill Creek trailed by a point at the half but remains undefeated after surging to beat North Gwinnett 36-17.

After suffering its only loss of the season to Warner Robins in Week 6, Lee County returned to its winning ways by beating North Miami Beach 68-49.

Cartersville is still undefeated after its 43-7 rout of Cass.

Colquitt had a bye in Week 7 and will face Alcovy on Friday at home.

Walton had a bye week in Week 7 and will face Hillgrove on Friday.

Langston Hughes scored one of the biggest wins of the week over Westlake but stands pat at No. 12 since none of the teams ahead of the Panthers lost.

Jefferson continued to rack up one-sided victories by blowing out East Hall 63-0.

Lowndes did all of its scoring in the first half in beating Alcovy 34-7 in Week 7.

Brookwood achieved its first shutout of the season vs. Mountain View, beating the Bears 34-0.

Grayson moved to 1-1 in region play after eking out a 17-14 win over South Gwinnett.

Westlake lost 31-24 to Langston Hughes in the Lions’ first region game of the year, falling just short of the goal line on the last play of the game.

Marietta had a bye in Week 7 and will play at North Paulding to begin region play on Friday.

Coffee had a bye in Week 7 and will face UCF commit quarterback Thomas Castellanos and Ware County to begin region play on Friday at home.

Calhoun opened up region play with a huge 63-17 win over Hiram in Week 7 and has a big road game against Justice Haynes and Blessed Trinity on Friday.

After losing two straight games to begin the year, Benedictine has scored at least 48 points a game during its four-game win streak.

Trinity Christian is undefeated and cruising (every win has been by at least 30) heading into its last non-region game of the year this week.

Woodward Academy improved to 3-0 in its region after beating Jonesboro 24-7.

Marist’s game vs. Hapeville Charter that was supposed to happen on Thursday, Sept. 30, has been rescheduled to Wednesday, Oct. 6.