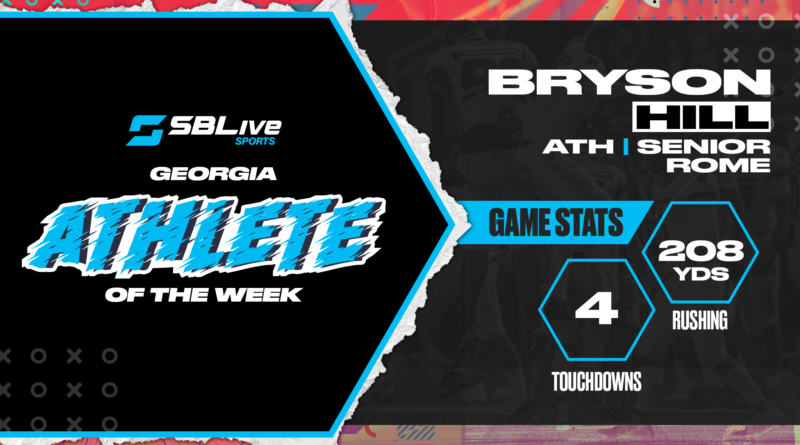 Congratulations to Rome ATH Bryson Hill for being voted SBLive’s Georgia High School Athlete of the Week for Sep. 20-26!

The senior rushed for 208 yards and four touchdowns, and he returned a fumble recovery 15 yards for a score vs. Carrollton.

Hill received 51.87% of the vote, beating out Benedictine WR Za’Quan Bryan who finished second with 45.94%.

Alston rushed for 173 yards and accounted for all four of Woodward Academy’s touchdowns in a win over Banneker.

Brown rushed for 133 yards and three touchdowns on 15 carries in a 27-7 win over Flowery Branch.

Bryan was all over the field for Benedictine, racking up 13 catches for 186 yards and a score in a thrilling 49-42 win over Ware County.

Cothern was the winning pitcher and went 4-for-4 with a home run, two triples and six RBIs against Gainesville.

Fann was 9-of-13 for 291 yards passing and four touchdowns in a rout of Northside.

Hardison pitched a shutout, striking out eight batters in a 2-0 win over North Oconee.

Morrissette recorded eight receptions for 190 yards and three touchdowns in a 40-19 win over North Gwinnett.

Mumu grabbed two interceptions, taking one back for a 39-yard score against Mill Creek.

Murrell needed only 10 carries to rush for 150 yards and three touchdowns vs. Alexander.

Screen was hitting on all cylinders in the Gwinnett County Volleyball Champions tournament. She recorded 44 kills, 24 digs and seven blocks throughout the day.

The sophomore stepped in for an injured Robbie Roper and went 14-of-21 with 145 yards passing and two touchdowns against Walton.

Turner threw the game-winning touchdown on a 55-yard pass in the fourth quarter in a 10-7 win over Camden County.