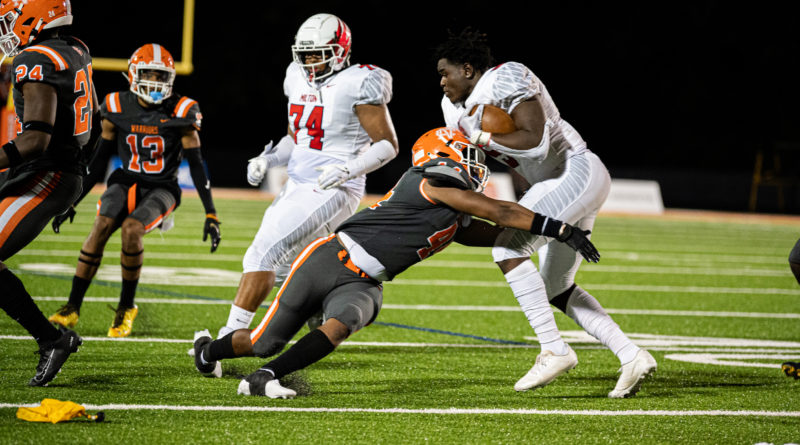 Over the next few weeks, we’ll be taking a position-by-position look at some of the top players in Georgia high school football. Our first list focuses on the running backs.

There are thousands of standout football players in Georgia, and these lists are not intended to be comprehensive! If we missed someone deserving of recognition, please let us know in the comments or hit us up on Twitter or Instagram @sblivega.

Pictured above is Milton’s Jordan McDonald (photo by Josh Major), who kept trying to run against North Cobb even after his helmet had been ripped off.

VOTE NOW: WHO’S THE BEST RUNNING BACK IN GEORGIA?

Woodward Academy head coach Ryan Davis raves about Damari Alston, and Auburn running backs coach Cadillac Williams has his eye on him. Alston recently rushed for 173 yards and accounted for all four of Woodward Academy’s touchdowns in a win over Banneker, and he excels on special teams on the rare occasions when the opposing team takes a chance by kicking to him. Alston had a fantastic junior season with 1,923 yards and 27 touchdowns, and he’s on pace to break the school’s rushing yards record as a senior. “He is a blue-collar hard-working kid and very humble, mature. He approaches this thing with maturity,” Davis said. “He sees the bigger picture, is well liked by his teachers and peers, very studious and has a 3.4 GPA.”

Williams, who’ll be playing for West Virginia next season, is one of the fastest running backs in his class. He has quick feet, and if the line opens the slimmest of holes, Williams will find his way through it. In his junior season, Williams put everyone on notice by averaging 1,763 all-purpose yards, 1,477 rushing yards, 286 receiving yards and scoring 19 touchdowns. Williams has shown he can catch the ball out the backfield and the deep ball. “Justin Williams is a very rare type of total student-athlete,” coach Billy Shackleford said. “I have coached some very gifted athletes in my career. Many have played big-time football and even made it to the pinnacle in football, the National Football League. Justin is one of those gifted athletes. He combines speed and quickness with power and strength. But what makes Justin extra unique is high ability to also attack the classroom like he attacks the football field.”

Norton doesn’t do too much talking, but he lets his play do all the talking on the field. He sees a hole and hits it hard and fast, which is scary for opposing linebackers and safeties when they see the 5-foot-11, 210-pound Norton coming at them. Norton can take a hit and deliver hits to his defenders, and get upfield and score. He’s a great receiver out the backfield and uses his speed to outrun defenders when he isn’t running them over. Norton had an injury setback in 2020, where he broke his collarbone, but he still ran for 467 yards and three touchdowns in six games.

Hayes is a critical part of the Blessed Trinity offense. Along with quarterback JC French, they consistently push the ball down field efficiently. Haynes is a four-star recruit and top-ranked junior running back in Georgia for a reason. He hits the hole fast and hard, runs over people who get in his way, and has good upper body strength to show off his stiff arm. He also can catch out the backfield and has the patience to let plays develop and allow his line work to open the holes. Big schools like Georgia and Ohio State have their eye on Haynes, who rushed for a whopping 356 yards on 36 carries with three touchdowns this season in a 24-21 win at ELCA.  “Justice tweaked his ankle in Week 1 and missed two weeks against Marist and St. Pius,” coach Tom Hall said. “He is a student of the game and catches the ball very well. Justice has a 3.9 GPA, which makes him a true student-athlete.”

Florida has been working hard to land big-time running backs regardless of their year, and the four-star Gibson is a talented sophomore who’s already verbally committed to the Gators. Gibson is a 5-foot-10, 180-pound back with impressive quickness and agility. In several other football camps and games, Gibson has shown to also be an adept route runner out of the backfield. Florida coach Dan Mullen is excited to already have Gibson on board with the Gators.

Martin is one of the bigger, stronger backs in his class. He’s 5-foot-11, 205 pounds and a handful for defenders to bring down. He rarely fumbles, runs with great speed and force while going north and south instead of east and west. The top-ranked senior running back in Georgia, Martin was sidelined in his junior year due to an injury, but in the five games he played in, he had 515 yards and seven touchdowns on 79 carries. Martin is looking to finish strong in his senior year and show the rest of the competition why he is staying in his home state at Georgia Tech next season.

Kromah has been one of the newcomers of the year in Georgia high school football at any position. The 5-foot-11, 185-pound freshman — yes, freshman — has been a beast for Lee County both running the ball and returning kicks. He had 26 carries for 227 yards in Lee County’s huge win over Lowndes, and Florida State head coach Mike Norvell was there to watch. He obviously liked what he saw, as the Seminoles offered Kromah shortly thereafter. It should be the first of many DI offers for Kromah over the next three-plus years.

Hawkins is just a junior, but he’s broken his school record for rushing yards and touchdowns in a game in consecutive seasons. Hawkins had 285 yards and five touchdowns in a game as a sophomore, and he topped both against Providence Christian Academy this season, scoring seven touchdowns while rushing for 301 yards on 20 carries, earning SBLive Athlete of the Week honors. The 5-foot-11, 180-pound runner will see if he can break that record again next year as a senior while trying to attract attention from college programs.

Streko has burst onto the scene as a junior for West Forsyth, showcasing his speed and power on a weekly basis. Through his first four non-region games, the 5-foot-10, 190-pound back gained over 650 all-purpose yards and scored 10 touchdowns. The highlight for Streko this season came in West Forsyth’s huge win over Walton, where he scored six touchdowns and gained 267 yards rushing in a 51-35 victory. He remains undecided on where he’ll play at the next level, but he has a season-plus left to impress college coaches.

Venn is a 5-foot-9, 170-pound running back with impressive top-end speed. Buford’s running and air attack are on par, and Venn (photo above by Josh Major) is a reliable check-down for Ashton Daniel to help keep the chains moving forward. In Venn’s junior season, he had over 801 yards rushing for Buford, and the senior has been off to the races for a strong senior year before starting his college career as a Colorado Buffalo.

McDonald is a 6-foot-1, 220-pound handful who has excellent vision, explosiveness, speed and strength. The three-star running back can take hits and often leaves linebackers and safeties feeling the worst of it. McDonald’s impressive senior season with Milton (419 yards through five games) has several SEC teams keeping an eye on him.

Felix has excellent vision and patience, letting his line work open holes and allowing him to get in the open field where he thrives. Felix has an explosive, quick first step and can outrun anybody. He also can return kicks and be a pass rusher on the defensive side of the ball. Felix had a minor setback in his junior season, missing five games with a hamstring injury. He’s the top-rated uncommitted running back in Georgia.

Lockett is 5-foot-11, 210-pound running back with an excellent combination of speed and strength. He sees where the holes are opening for him, hits them fast and has breakaway speed once he gets through. Lockett can also line up as a receiver and win one-on-one matchups in the passing game. Lockett has had a number of big games this season, including 235 yards and three touchdowns in a win over Providence Day (North Carolina). Lockett has been offered by Miami, Georgia, Florida State, Kentucky and South Carolina.

A transfer from McEachern, Smith was balling for them and now is playing exceptionally well for Walton alongside Zak Rossman. Smith is a speedy 5-foot-11, 170-pound back who can also line up at receiver. Memphis is getting an athlete who can run routes, catch out the backfield and use his speed to outrun defenders and mess up their angles. Memphis running backs coach Anthony Jones will help improve Smith’s craft every day he steps on the field.

First-year coach Rickey Bustle is a coach who has seen all levels of football. He knows good players when he sees them, and his senior running back Johne’ss Davis impressed not only him but other college recruiters such as Army and Navy. Davis put everyone on notice with a four-touchdown, 262-yard game against Walker on only 13 carries. He’s try to convince colleges he’s recovered from two torn ACLs, and his play on the field this season is making a persuasive case.

Askew has been a monster this season, amassing 1,177 yards through six games and was recently rewarded with his first scholarship offer, from Harding University. Askew is a power back who’s also strong in the classroom (3.7 GPA), and he hopes his big improvement from his junior to senior year will keep the college offers coming as his last year of high school football winds down.

Perry is one of the stronger running backs on this list. He plays fast, downhill is not afraid of contact. In a recent game against a solid McEachern defense, Perry rushed for over 177 yards and three touchdowns to help secure the win. The 6-foot, 205-pound Perry has put up a number of highlight-reel runs this season, from long sprints to the end zone to ferocious stiff-arms over helpless defensive backs.

Dorian Graham is a natural athlete who’s been playing varsity since his freshman year. He’s shown the ability to use his speed to outrun defenders, catch wheel routes out the backfield, and offer remarkable ability after the catch. Graham has had two great full seasons for Sandy Creek and continues to impress during his junior year. Through Sandy Creek’s 5-0 start, Graham had 394 yards rushing with seven TDs on the ground and three through the air.

Brown is another athlete who shows tremendous promise at the running back position for South Atlanta. He makes heads-up plays, has outstanding agility, quick feet, and has the raw speed to mess up defenders’ angles when they are in pursuit. His speed allows him to break the edges, get on the outside and make big plays. In his junior season, Brown’s biggest game has been a 267-yard performance against Lovett.

In his junior season, Carter showed he could handle the bulk of the Tift carries while also playing defense. He keeps his legs moving every play, and he has incredible strength. Carter will run you over if you get in his way, and he has the speed to run away from his defenders. Carter is one of the smaller running backs on this list, but that does not stop him from showing he can ball out each week. He had 22 carries for 182 yards and two touchdowns in a 16-14 win over Irwin County.

Just a sophomore, Elder burst onto the scene with his first career 100-yard game against Alpharetta, rushing for 127 yards and three touchdowns. The 5-foot-9, 170-pound back has a lot of strength in his small frame, and he’s likely to get bigger and stronger over the next couple of years, attracting the attention of bigger, stronger college programs.