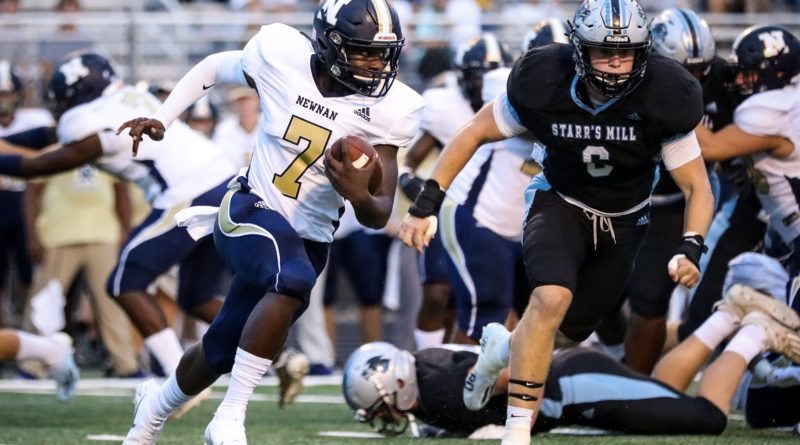 Pictured above is Newnan quarterback James Paige (photo by Covey Jones), who threw a touchdown pass and rushed for two more Friday night.

Stockton threw for 232 yards and three touchdowns while rushing for 113 yards and another score.

After Cedar shoals blocked a potential game-winning field goal, Hubbard ran for a score in overtime to give Cedar Shoals a 27-20 win over Madison County.

Baker recorded all three of Pierce County’s touchdowns in the loss to Rabun County. He hauled in a 62-yard touchdown reception and rushed for two more scores.

Swann threw five touchdown passes in a 51-20 rout of Woodstock.

Terry rushed for two touchdowns in a 37-28 win over Gainesville, and his second score was a 44-yard run that put Gainesville away for good.

Paige threw a touchdown pass and rushed for two more scores in a 42-17 win over North Paulding.

Downs scored on a 92-yard kick return that helped Mill Creek reclaim a lead that they never lost again, winning 36-17 over North Gwinnett.

Streko had over 100 yards rushing and three touchdowns in just the first half in a 30-27 loss to North Forsyth.

Williams intercepted two passes in the 57-0 shutout of Chattahoochee.

Peltz kicked three field goals, including the game-winner over West Forsyth after a Caleb Brown reception moved the ball inside the red zone.

Speer returned two punts for touchdowns, one from 70 yards out and another from 85 yards out, in a 63-17 win over Hiram.

Thompson caught two passes for touchdowns and blocked a kick for the sixth time this year vs. Chattahoochee.

Hicks had 18 carries for 199 yards and a rushing touchdown while recording one touchdown reception in a 40-13 win over South Paulding.

Smith threw for 347 yards and four touchdowns in Riverwood’s highest-scoring game of the season so far, a 44-15 win over River Ridge.

Bond had two touchdown receptions, and he took a kick return 61 yards for a score in a 58-0 shutout of Habersham Central.

Hill rushed for four touchdowns in the first half as Rome beat Dalton 49-6.

Alston rushed for scores on 52- and 35-yard runs to help lift Woodward Academy to a 24-7 win over Jonesboro.