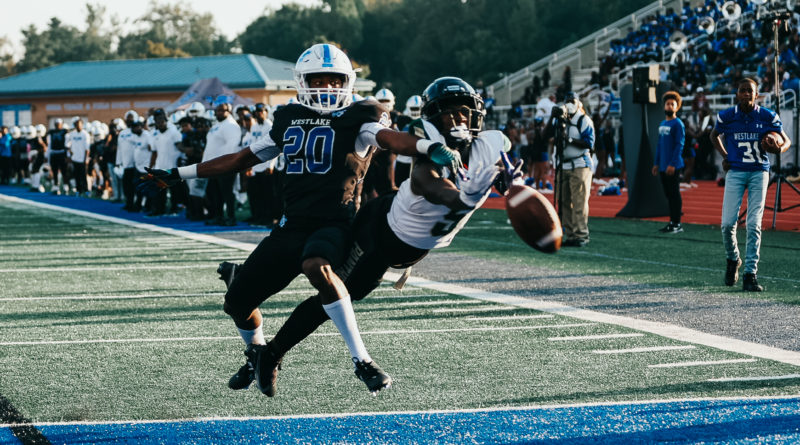 ATLANTA, Ga. — Langston Hughes traveled to face Westlake in hostile territory Friday and came out with a hard-fought 31-24 win.

The Panthers (5-1) appeared to be headed toward blowing out Westlake (4-2) on the Lions’ home turf after one half — with Westlake alum Cam Newton watching from the sideline — but in region rivalries such as this, you can often expect the unexpected.

“They wanted it,” Langston Hughes coach Daniel Williams said of his team. “This was player-related — the energy, the momentum. This was all on them. I have to give them credit.”

After falling behind 18-0 at halftime and later 24-0, Westlake stormed back but got stopped just inches from the goal line with a chance to tie the game.

“My players fight,” Williams said. “We are going to always put up a fight. That’s what this game showed me. This was a big game for us, a region game and they are just six miles down the road, so we knew the players were going to get up for this one.”

Westlake had the ball on the 2-yard line with two seconds left, down 31-24. They ran a sweep to the right, and the Panthers defense came up with the biggest stop of their season to end the game.

Word of the Panthers’ defense had been getting around, as they had allowed only 27 points through five games, but the Lions were easily the best offense they had faced.

It didn’t look that way early.

The Panthers’ front seven made life difficult for star Westlake quarterback RJ Johnson all night. They were in his face on passing attempts and stuffed the run game.

Johnson came into Friday’s game with only one turnover, and he left the first half with three. He threw his first interception to Terrance Love, who set the Panthers up with great field position, and the second came on a 60-yard drive ended by Xavier Smith, who picked it off in the end zone and took it back for 50 yards. Johnson also lost a fumble.

After a field goal, all of a sudden Westlake was down 24-17, and after a big defensive stop, Johnson and the Lions’ offense was rolling and ready to drive for the tying score.

But the Panthers’ defense did what they had been doing all year, and Tookes grabbed what looked like the game-sealing interception, taking it 70 yards to the house.

With a score of 31-17 with a little over two minutes left, Westlake’s offense ran the perfect two-minute drill and scored without having to use any timeouts.

After a defensive stop, the Lions got the ball back with under a minute to play, but their hopes of a comeback ended just short of the goal line on that big Panthers stop.

“I see us going to state and winning state, but the goal is to go 1-0 every week,” Tookes said.