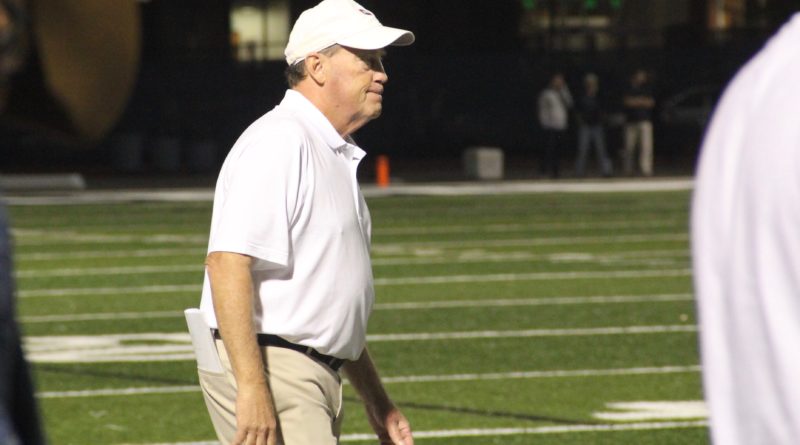 ROSWELL, Ga. — One block, one square mile in the Atlanta suburb of Roswell features three high schools, and one man has led the football teams at all of them.

Those schools are Roswell High School, Blessed Trinity Catholic School and Fellowship Christian School, and the man is Tim McFarlin.

“This sport isn’t really about what you do but who you do it with,” McFarlin said. “I think there’s some of the most wonderful people in the world on all three corners here. This is a fortunate community.”

He spent nearly three decades at Roswell High School, at first as an assistant and then for 10 years as head coach, where he led the Hornets to three region titles and a state championship.

In 2011, he moved across the street to Blessed Trinity, where he led the Titans to eight consecutive region titles and three consecutive state championships in 10 years as head coach.

So, when news broke that McFarlin would be stepping down from his position as Blessed Trinity’s head coach once the 2020 season ended, it made waves across the state — and tidal waves in Roswell.

Little did everyone know, McFarlin wasn’t leaving the city or the coaching world. There was one school on the block where McFarlin hadn’t coached, and Fellowship hoped to change that.

McFarlin said he wasn’t interested in taking the position at first. However, he met with Fellowship athletic director David Lowery a second time and was sold.

The vision Lowery had for the program aligned with what McFarlin pictured, he said, including its efforts to promote diversity and be more reflective of the community. Plus, he would no longer have to teach in the classroom in addition to coaching.

“I’m not as young as I used to be,” McFarlin said. “And for me, I love staying here in Roswell. I looked at a job up in the mountains and said no. I’m in Rotary, and I like working on the service projects and being a part of this community.”

Taking over at Fellowship was a different type of situation from his last gig. When McFarlin arrived at Blessed Trinity, the team had yet to win a playoff game in 10 seasons.

Fellowship has won 11 playoff games in 17 seasons and made it to the state championship in 2016. The previous head coach, Al Morrell, went 66-26 in eight seasons, leading the Paladins to at least 10 wins in each of the previous three seasons in addition to winning the Region 6-A Private title the past two years.

“Al laid a tremendous foundation and a high watermark. It probably wasn’t smart to take this job, to be honest with you,” McFarlin said in jest.

So far, the McFarlin era at Fellowship is off to a strong start. Halfway through the regular season, the Paladins stand at 4-1 overall and 1-0 in region play. Their one loss came at Trinity Christian, the top-ranked team in Class A Private.

With two more wins under his belt, McFarlin will reach the 200 mark for his career.

There’s no telling how long he’ll remain the head coach at Fellowship. He spent 10 years as Roswell’s head coach and 10 years as Blessed Trinity’s head coach, so perhaps he’ll keep the pattern going and spend a decade with the Paladins.

Regardless of the amount of time he ends up spending at Fellowship, his purpose is clear.

“As coaches, we’re all interims,” McFarlin said. “We’re just caretakers of a program, and we need to leave it better than we found it. Al did that, and I hope I can do the same thing.”