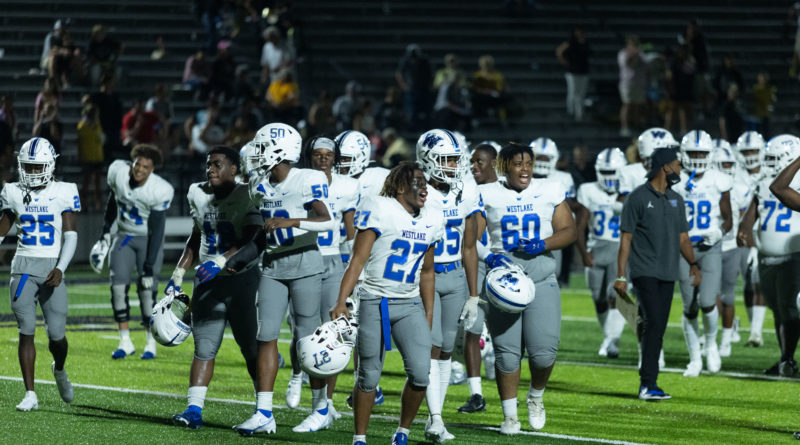 Week 7 features only one matchup between SBLive Georgia Top 25 opponents, but there’s a ton of great region play this week.

Pictured above is the Westlake football team (photo by Ethan Lowe) celebrating its win at Colquitt County earlier this season. The No. 15 Lions host No. 12 Langston Hughes in the game of the week, with No. 20 Rabun County at Pierce County coming in as a close runner-up.

ELCA is in uncharted waters to start the season. This is the worst start the Chargers have had in school history. But other than Ware County, their other two losses have come by only three points. The Chargers just need to find a way to finish, but that task won’t be any easier this week. Trinity Christian has been a man among boys this season, putting up 275 points and at least 50 in each game. Senior quarterback David Dallas has over 1,200 passing yards and is top 10 in the state with 18 touchdowns and only one interception. Besides the potent offense, the Lions’ defense has given up only 44 points in five games, allowing single digits in three of them. This will be a tough one for the Chargers, but expect them to put up a good fight.

This is a midseason battle amongst undefeated 3A region opponents. Adairsville is off to its best start since 2015-16 season and winning games the old-fashioned way, grinding it out on the ground. The Tigers have four rushers with over 150 yards, and Eli Agnew leads the team with 428. The Adairsville defense has allowed just 19 points in its last two games, but the Tigers face their toughest test of the season Friday. Ringgold has scored 244 points in five games — including 78 and 56 in its last two, both of them shutouts.

South Paulding’s only loss came in Week 2, and since then the only game the Spartans scored fewer than 50 was in a 34-32 win over Rome. Their offense has been dynamic behind junior quarterback Kasen Weisman and running back Jamarion Wilcox, but their downfall this week may be their defense, which has given up points in bunches. Carrollton is looking to make a quick 180 after suffering its first loss last week to Rome. Last week’s game broke the Trojans’ streak of scoring 40-plus points, and they gave up a season-high 45. This week is a good comeback opportunity for the Trojans’ offense but another test for their defense. Watch for quarterback MJ Morris to have a big game, as the senior has 1,300 passing yards with 18 touchdowns and only one interception.

A big region game and a Forsyth rivalry makes for a great matchup. The Wolverines are hoping their bye last week helps them regroup from a brutal 38-10 loss to Mill Creek, which bumped them down to 2-2 on the season. Both West Forsyth losses have come at the hands of top 10 opponents, so North Forsyth should have its hands full. The Raiders’ strength is their defense, which has averaged just over 10 points per game, including a recent shutout against Etowah. They also have a balanced running attack that can keep opposing defenses on their toes.

Carver lost its first game to Lee County, but the Tigers gave the Trojans everything they could handle and lost by only three points. Since then the Tigers have been lights-out, scoring 149 points while only allowing 30 in their four-game winning streak. They share the wealth on offense with six rushers over 100 yards (running behind Alabama commit Elijah Pritchett), five receivers over 100 yards, and they execute as a unit on defense. LaGrange’s undefeated start is reminiscent of last year, when the Grangers’ winning streak ended at the hands of Carver. The Grangers appear poised for a different outcome this time, as they’ve scored 170 points while allowing 39.

Sandy Creek has put last season in the past and is playing on an elite level. Last year the Patriots played only six games due to COVID-19 and went 2-4. The Patriots’ offensive output has increased every week, peaking last week with 56 points. A big reason why their offense is so hot is because of quarterback Geimere Latimer. Salem was in the same boat as Sandy Creek last season, able to play only six games and ending with a 2-4 record, and the Seminoles have bounced back this season. Other than a brutal 46-0 loss to Coffee, Salem hasn’t sweated much, but the four teams the Seminoles have beaten have a combined win total of four. If the Seminoles want to prove they can beat good teams, then this will be a great game to prove it.

Lee County suffered its first loss of the season last week to Warner Robins, falling from No. 2 to No. 7 in SBLive’s Georgia Top 25. Before the Warner Robins game, the Trojans had given up only 57 points, but they allowed 56 to the Demons. Lee County may not face another team that good for the remainder of the regular season, but the Trojans will need to shore up some things on both sides of the ball to win a state title. North Miami Beach is coming off a 49-28 loss to Miami Central — a top 10 team in Florida — so both teams are eyeing bounce-back weeks.

Camden County is coming off a hard-fought 10-7 loss to Coffee. In their first six games, the Wildcats have averaged 45 points in their four wins but struggled to score in losses to Coffee and Marietta. This week they face their biggest test when they welcome No. 2 Warner Robins, which has been dominant regardless of the level of competition. The Demons eclipsed their season high in points last week against Lee County, while holding one of the best teams in the state to well below their season average. Camden County will try to lean on its elite rushing attack to keep the Warner Robins offense off the field.

Rabun County is coming off a 70-point victory, and it’s safe to say the Wildcats haven’t hit their ceiling. Since their loss to Jefferson to start the season, the Wildcats have averaged 60 points per game, and their scoring output has increased weekly, from 47 to 59 to 63 to 70. Their game Friday against the reigning 3A state champs will be their toughest since Week 1. Pierce County hasn’t been putting up big offensive numbers, but the Bears have a suffocating defense. They have three shutouts in the last four weeks and have given up only 33 points this season. Pierce County hasn’t lost more than one game in the last three seasons, so if the Bears can’t slow down future Georgia QB Gunner Stockton and the Wildcats’ offense, then the reigning champs might find themselves in rare territory.

Langston Hughes is coming off a bye week and looking to recapture their momentum from a 55-0 win in Week 5. Other than the Panthers’ 7-6 loss to Newton to start the season, they have four straight blowout wins, with their average margin of victory at 35 points. But three of those wins came against teams with a total of three wins, and one was a forfeit, so this will be their biggest test yet. Westlake has three wins against three opponents with only two wins total, but the Lions have played two great games against two really good opponents — beating No. 9 Colquitt County and losing by a touchdown to No. 11 Creekside. This should be a great region matchup between two Top 25 teams.

There is too much great Georgia football to stuff it all into just 10 games. Here are 10 more solid matchups in Week 7: