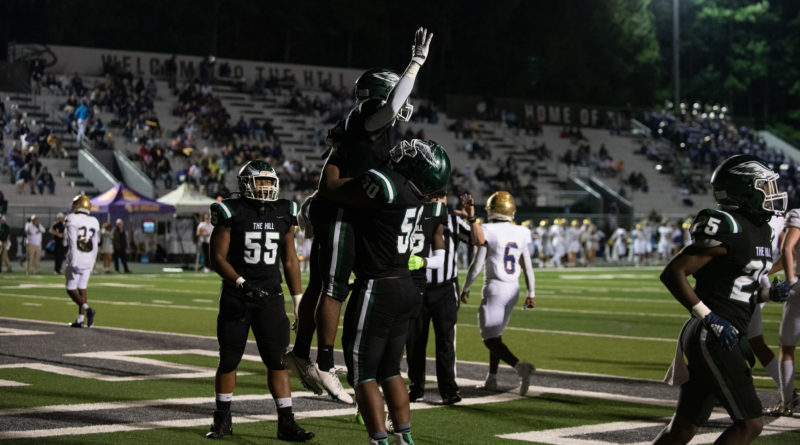 Warner Robins scored the win of the week over Lee County, taking the No. 2 spot formerly held by the Trojans.

But Collins Hill remains the undisputed No. 1, staying where it’s been since the preseason rankings after shutting out previously unbeaten East Coweta.

Collins Hill pulled off its third consecutive shutout — this time over previously unbeaten East Coweta — to remain at No. 1.

Warner Robins took down previous No. 2 Lee County in thrilling fashion, 56-38, to replace the Trojans behind Collins Hill.

North Cobb made it four straight dominant wins since a narrow loss to Buford in its season opener, beating North Gwinnett 40-19 at home.

Milton started slow but took care of business vs. McEachern, winning 42-29 on the road.

After being shut out last week by Chaminade-Madonna (Florida), Buford pulled off a shutout of its own in the Wolves’ first region game of the year vs. Central Gwinnett, winning 41-0.

Another week, another impressive win over a ranked opponent for Mill Creek, which beat Grayson 28-14.

Lee County fell five spots (and from the ranks of the unbeaten) with a 56-38 loss on the road to Warner Robins.

Walton beat Roswell decisively in Week 6 and has a bye in Week 7.

Colquitt County was executing on both sides of the ball as they notched a blowout 52-7 win in Week 6 over Northside.

Cartersville had a bye in Week 6 and will face Cass at home on Friday to begin region play.

After a tough loss to Cartersville, Creekside has had two consecutive blowout wins, 41-0 over Drew and 55-0 over Tri-Cities in Week 6.

Langston Hughes had a bye in Week 6 and will face a formidable region opponent in Westlake (4-1) at 6 p.m. Friday.

Grayson suffered its second loss of the season, as the Rams struggled to get their offense going against Mill Creek.

Lowndes earned its fifth consecutive win in the Winnersville Classic against Valdosta with a 21-0 shutout. The victory was Jamey DuBose’s 150th win as a head coach.

Westlake beat Shiloh 26-6 in Week 6 and will face Langston Hughes on Friday at home to begin region play.

After beating Flowery Branch 27-7 in Week 6, Jefferson is the only unbeaten team left in its region heading into Week 7.

Brookwood bounced back from a narrow loss to North Paulding with a big win at Marietta. Its only other loss this season was to Collins Hill.

Marietta fell to Brookwood 31-26, its first defeat since losing by a field goal to Colquitt County in Week 1.

Coffee earned a hard-fought 10-7 victory over Camden County and is allowing just 7.6 points per game this season.

The Wildcats couldn’t be tamed in beating Pickens (South Carolina) 70-14 at home. Rabun County travels to Pierce County for a big Week 7 game.

West Forsyth had a bye in Week 6 and begins region play vs. North Forsyth on the road Friday.

Calhoun beat Cedartown 31-7 in Week 6. Besides one loss to McCallie (Tennessee), Calhoun has been dominating its opponents week in and week out.

Two of the best quarterbacks in Georgia faced each other in Week 6. Auburn commit Holden Geriner and Benedictine pulled off a 49-42 win in a shootout with UCF commit Thomas Castellanos and Ware County, which was 4-1 going into the game.