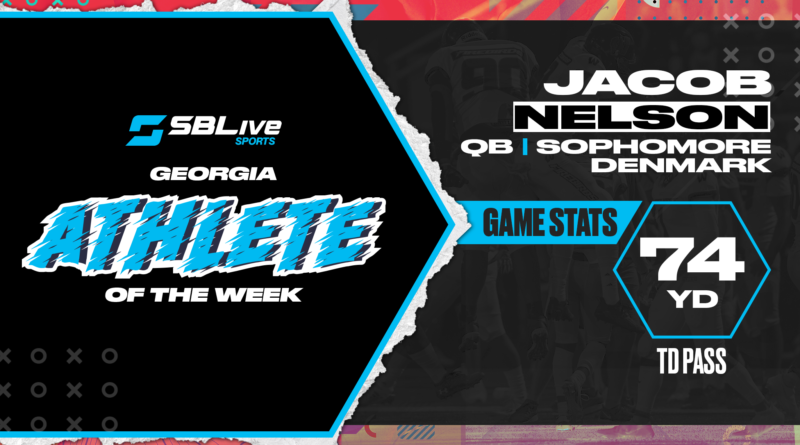 Congratulations to Denmark quarterback Jacob Nelson for being voted SBLive’s Georgia High School Athlete of the Week for Sep. 13-18!

The sophomore threw a 74-yard strike for a touchdown to secure a 20-17 win over North Forsyth.

Nelson ran away with this week’s honor, receiving 82.35% of the total vote.

Here are the other athletes who were nominated for Sep. 13-18:

Anderson threw three touchdown passes, including the game-winner in the fourth quarter in a 35-33 win over Brookwood.

Ashley won first place with an individual time of 15 minutes, 34 seconds, propelling his team to a third-place finish overall.

Beyer had a match-high 19 kills in a 3-1 win over North Forsyth.

Brown rushed for 267 yards in a Week 5 win over Lovett to keep his stellar junior season going.

Cheeks rushed for 242 yards and three touchdowns vs. Forsyth Central.

Hughes led his team to a win over Parkview with an excellent performance in Week 5, going 13-of-19 for 241 yards and four touchdown passes.

Morris found the end zone all night, going 16-of-19 for 255 yards and six touchdowns while rushing for another score in a blowout win over Dalton.

Munson went 3-for-5 with a grand slam, a three-run home run, a double and a school-record eight RBIs as Collins Hill triumphed over Winder-Barrow.

Nation hauled in two touchdown receptions and returned a punt for a touchdown against Campbell.

Reeves went 4-for-4, hit for the cycle and scored the game-winning score in a 6-5 win over Loganville Christian. She also had three hits, two doubles and two RBIs in a 9-6 win over North Cobb Christian.

Harrison fell to Grayson 31-23 in week 5, but Vail returned an interception 68 yards for a touchdown.