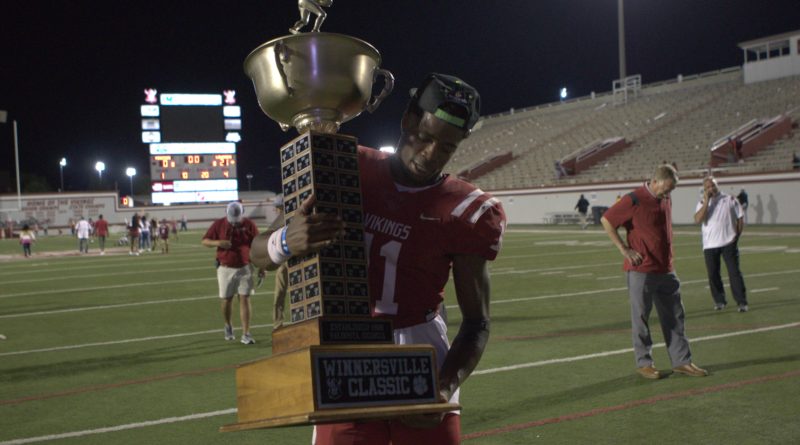 VALDOSTA, Ga. — Behind great defense and the legs of running back Chase Belcher and quarterback Jacurri Brown, Lowndes blanked Valdosta on Friday night in one of Georgia high school football’s best rivalries.

Belcher finished with 98 yards rushing and two touchdowns on 14 carries, and Brown added 54 yards rushing and a score on 15 carries in the Vikings’ 21-0 victory and fifth straight Winnersville Classic triumph.

“Our defense stood tall,” Brown said. “They made some plays that were really crucial, conserving the goose egg.”

Through the air, Brown was only 9-of-26 for 80 yards and an interception.

But this Winnersville Classic victory was special for Lowndes for a couple of reasons: Besides being the Vikings’ fifth consecutive win over Valdosta, it was Jamey DuBose’s 150th win as a head coach.

“That’s just a number to me,” DuBose said. “I’m blessed — I am excited to get (that 150th win) on Winnersville. That was a lot of fun, and it’s a memory I’ll always look back to. I owe everything to all of the coaches and players who have been with me because they do an outstanding job.”

DuBose was especially pleased with how his defense performed.

“We’ve had some struggles this year defensively, but in the open week we went back to the fundamentals and were physical in the first part of the week at practice, and I thought we played physical tonight,” he said.

He was pleased with his offense as well, but thought Valdosta exposed some areas where Lowndes could improve — especially picking up blitzes and facing talented defensive backs.

“Offensively, I thought we looked good in the first half,” he said. “We were smooth and playing fast. In the second half, they really went after us. I thought their secondary was really good — better than I gave them credit for coming in. We’ve got to get better, but that’s what football is.”

Lowndes won the turnover battle, recovering each of Valdosta’s two fumbles, and defensive back Marlon Evans recorded Lowndes’ lone interception on the night.

The Vikings’ only turnover was Brown’s interception to Valdosta defensive back Charlie Porter.

Valdosta defensive back JaDarian Rhym, an LSU commit, led the game in solo tackles with eight.

On Lowndes’ second drive of the game, Belcher rushed for a 39-yard touchdown to put the first points up on the board. His second rushing touchdown came at the beginning of the second quarter as he scored on a 12-yard run.

The last touchdown of the game was Brown’s only score, running from 15 yards out in the second quarter to put the score at 21-0 going into the half, and it was all defense from there on both sides.

Valdosta spent much of the night punting, but the Wildcats did have one really good chance to score.

Just before the fourth quarter, Valdosta started with the ball on its own 13-yard line. The Wildcats drove to Lowndes’ 4-yard line, but quarterback Joseph Gardner was stopped just short of the end zone.

Gardner was 6-of-21 for 82 yards passing with one interception. He carried six times for 56 yards.

Valdosta head coach Shelton Felton has nothing but respect for his team’s cross-town rival, but he knows his team is capable of more.

“We have got to do better on offense,” Felton said. “We can’t turn the ball over. We’ve just got to lay it down on offense and keep playing great defense. We lost to a great team tonight.”

Despite not being at his best Friday night, Brown knows how important this rivalry game win was for his team and his community.

“We’ve got stuff to work on, but all in all, good win and good five-peat,” he said. “We wanted it more. That’s just us. I mean, we’re home, we had the home-crowd advantage, and you can tell that we wanted it more.”

The Miami commit said Lowndes’ plan for the rest of the year is to “run the scores up and win state.”