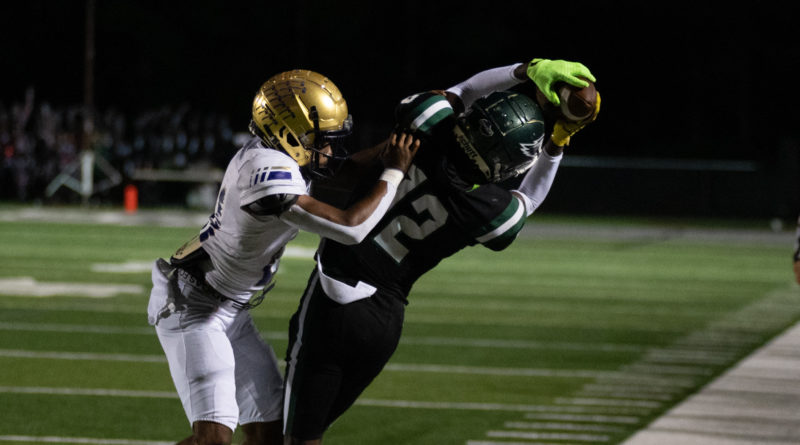 Warner Robins’ offense kept showing that it can score on anybody, and Collins Hill (photo above by Jamie Spaar) left the Georgia high school football world wondering if it has a weakness.

Both teams passed arguably the toughest test of their seasons with flying colors in Week 6, leaving fans wishing they were in the same classification come playoff time.

Collins Hills again showed it belongs in the top spot with a dominant shutout win over East Coweta — its first loss on the season.

The Trojans gave up more points in this game than they did in their previous four games combined.

The Warriors have won four straight since their season-opening loss to Buford and have scored 40-plus points in each of their wins.

After a slow start, Milton took care of McEachern handily after winning its last two matchups against tough out-of-state opponents.

Buford came back strong to dominate Central Gwinnett after suffering its first loss of the season last week against Florida’s Chaminade-Madonna.

Warner Robins is looking unstoppable, improving to 5-0 on the season after beating the No. 2 team and averaging 50 points per game.

The Hawks continued their dominant play by knocking off No. 8 Grayson. The 14 points were the most Mill Creek has allowed this season.

After losing their opener to Creekside, the Rams had won four straight up until Friday’s disappointment against Mill Creek.

The Raiders flipped the switch after losing their first game last week and giving up 51 points. The defense played a much better game Friday and handed Roswell its first loss.

Catersville had a bye and will face Cass on Oct. 1.

The Packers have been putting up points in bunches since their Week 2 loss to Westlake. They outperformed Northside in every aspect and moved to 5-1.

The Panthers had a bye and are set for a big-time game against Westlake on Oct. 1.

The Seminoles have been the epitome of dominant since their loss to Cartersville. Since then, they have scored 96 points while allowing a single point.

The Trojans suffered their first loss of the season in their first game where they failed to score at least 40 points.

The Vikings increased their win total to three after last week’s tough loss to Lee County. Their defense came to play, with this being their first shutout of the season.

The Lions have scored 82 points in their last two games and only given up 12. They are set to face Langston Hughes next week in a Top 25 matchup.

The Blue Devils were handed their second loss of the season after winning three in a row.

Sammy Brown led the Dragons with 133 yards on 15 carries with three touchdowns and the defense was stout again.

The Indians ran into an unstoppable force Friday night. East Coweta had been averaging nearly 40 points in five games, but its offense was kept in check and its defense didn’t have any answers for Travis Collins, Sam Horn and company.

The Purple Hurricanes suffered their first loss of the season to the reigning 3A state champions.

The Wolverines have a bye and are regrouping from their 38-10 loss last week at the hands of Mill Creek. They’re set to face North Forsyth next Friday.

The Wildcats put on a dazzling display of offense in beating their third straight Carolina opponent. Rabun County is 4-1 and is averaging 60 points over the past four games.

The War Eagles handled their business and moved to 5-0 on the season. They are set to face a tough opponent in 4-1 Jonesboro next week.

The Wildcats get shut out as their struggles continue in the Winnersville Classic.

The War Eagles have scored 87 points in their last two games to surge to 3-1, with the lone loss coming to Woodward Academy.