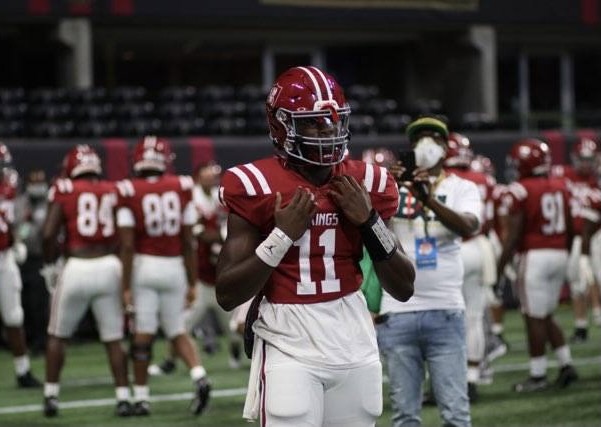 Pictured above is quarterback Jacurri Brown (photo by Zach Edmondson), who will try to lead Lowndes past Valdosta on Friday in the annual Winnersville Classic.

A midseason battle of the unbeatens. North Atlanta is feeling as good as any North Atlanta team has felt in the past 10 years. With a win Friday night, the Warriors will tie their best win total since the 2010-11 season. During their four-game win streak the Warriors have scored 123 points and given up only 31. Pebblebrook is 4-0-1 on the season, with its most recent game ending in a 14-14 tie against Riverdale. Before last week, the Falcons had been blowing out their opponents. In the past 10 years, Pebblebrook’s most wins in a season was six, so a victory Friday against an undefeated opponent would position the Falcons well for a historic season.

No. 14 in SBLive’s Georgia Top 25, Carrollton is heading to Rome to face the Wolves in a tough region matchup. Rome started the season 2-0 and then went 0-2 against No. 1 Collins Hill and South Paulding, who have a combined record of 8-1. The South Paulding game came down to the wire, ending 34-32, so don’t count out the Wolves. Carrollton, on the other hand, is enjoying yet another great year. Since the 2016 season, Carrollton has had state title hopes but hasn’t quite gotten there, but the Trojans have reason to believe this could be their year.

Northside goes on the road to face a tough Colquitt County team ranked No. 7 in SBLive’s Top 25. The Eagles are 4-1 on the season, but their one loss was a 49-7 beat-down by Warner Robins. Besides that, the Eagles have played lights-out football. They have failed to win the big games and finish above .500 the past two seasons, so if they want to solidify themselves as a state championship contender, then these are the games they need to win. Colquitt County is also 4-1, but its one loss came in an entertaining 31-24 game against No. 16 Westlake. The Packers have been in close games all season, but they hope to ride the momentum of their 55-0 blowout win last week against Heritage.

Fitzgerald is 3-0 and has state championship aspirations in Class 2A. The Purple Hurricanes are coming off a dominant 14-1 season last year, with their only loss coming in the third round of the playoffs. They are off to a good start this year but face a tough team in Pierce County, which is 3-1 this season coming off its 3A championship run last year. The Bears’ only loss came to Brunswick in the season opener, and since then they’re averaging 32 points per game while giving up only 13 in that three-game span.

Walton is coming off a bye, which was needed after a blowout loss to West Forsyth. The Raiders gave up 51 points, the most a Walton team has given up in over two years. They’re looking to bounce back this week against a rising Roswell squad that’s 4-0 and playing some great ball. Walton will be the Hornets’ first ranked opponent of the year and should shoot up in the rankings with a win. Behind senior quarterback Robbie Roper, Roswell is averaging 40 points a game. This game has the potential to turn into an action-packed shootout.

Camden County is 4-1, with its only loss coming against No. 17 Marietta. The Wildcats’ rushing offense has an argument for being the best rushing attack in the state. They have six players with over 100 yards rushing, and leading rusher Deonte Cole sits at 419 yards. Camden County will need its run game to remain dominant to beat Coffee, which is 4-0 and has breezed through each game. The Trojans have scored 157 points on the season and given up only 31, with their last two games being shutouts. In Week 2 Coffee gave up 150 rushing yards to Houston County, so the Trojans’ defense might have a tough time stopping Camden County’s rushing attack.

Valdosta has had a tough 1-3 start to the season — losing big to Warner Robins in the opener, suffering a COVID-induced forfeit loss at Bainbridge and then a tough six-point loss to Colquitt County. Valdosta is coming off a bye and looks to turn its season around against its biggest rival in the annual Winnersville Classic. Lowndes, like Valdosta, has played a tough early-season schedule. The Vikings have averaged 51 points per game in their two wins, and their two narrow losses have come against top-tier opponents — No. 9 Walton and No. 2 Lee County. This should be a close game in one of high school football’s best rivalries.

Grayson has won four straight since its season-opening loss to Creekside. The defending 7A champion Rams now face their first ranked opponent since then and will have their hands full with undefeated Mill Creek. The Hawks are coming off a convincing win over No. 21 West Forsyth and have been playing at an elite level on both sides of the ball all season. Their offense has scored 157 points in four games, while their defense has allowed only 40 points. The most the Falcons defense has given up was 13 points in Week 2. Grayson is coming off an 11-point win over Harrison and a two-point win over Archer.

No team has really made the Eagles sweat thus far. Even when they faced off against one of Mississippi’s top teams, they still won by 15 points. Collins Hill’s magic on offense this season is based on a steady dose of quarterback Sam Horn and receiver Travis Hunter. That duo makes them almost unstoppable in the passing game, and they have a good rushing attack to complement, with three players over 100 yards rushing. And the defense has allowed only 32 points this season, 22 of them to Greenville Christian (Mississippi). On the other side we have East Coweta, which is not a team to overlook. The Indians may not be getting the national recognition of Collins Hill, but they have been nothing short of spectacular this season. They are 5-0 and have won every game by at least 17 points. They gave up 24 points to open the season at Whitewater, but since then they have allowed 13 points and had three shutouts.

This region game is set to be a classic, as both teams are undefeated. Three out of Lee County’s five wins have come in blowout fashion, with two of them being shutouts while they topped 60 points. They have also beaten top-tier teams Carver and No. 15 Lowndes. Meanwhile, Warner Robins is 4-0 and has scored 196 points while allowing 70, but the Demons have given up only 16 points total in their previous two wins over Northside and Houston County. While their defense has been dominant of late, their offense has been even more dynamic, with two receivers having 300-plus yards and two rushers over 230 yards.

There is too much great Georgia football to stuff it all into just 10 games. Here are 10 more solid matchups in Week 6:

One thought on “Top 10 games to watch this week in Georgia high school football: Lee County at Warner Robins is the headliner”