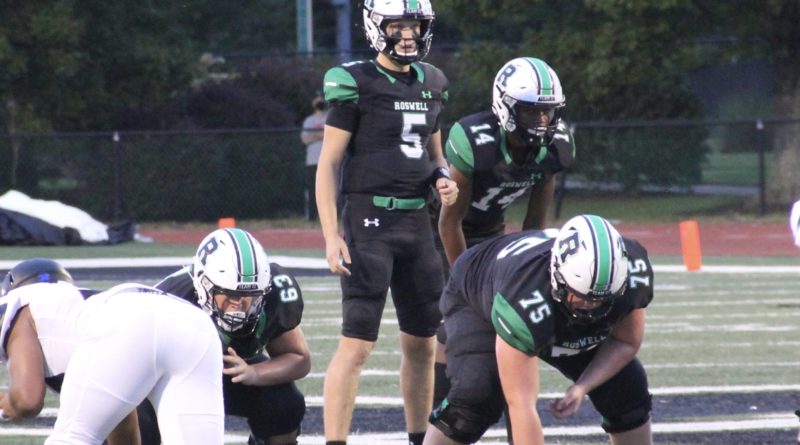 ROSWELL, Ga. — Robbie Roper wasn’t off the grid in 2020, but he wasn’t exactly on everyone’s radar, either.

Through four games, the Roswell quarterback has thrown nearly five touchdowns (4.75, to be exact) and over 350 yards (356.3) per game, the highest numbers for any quarterback in the state, regardless of classification.

The senior is also tied for the state lead in touchdown passes with 19, and the person he’s tied with, Prince Avenue Christian’s Aaron Philo, has played one more game than Roper and the Hornets.

“It’s a bunch of fun,” Roper said. “I moved here last year, so this is my second year (with Roswell). It’s just a bunch of fun winning, and the coaches make it fun, too.”

Roper transferred to Roswell after attending nearby Woodstock as a freshman and sophomore. Moving schools and playing for a new team requires a transition period, and Roper’s was made more difficult due to the pandemic.

Despite the lack of time with his new team, Roper didn’t come out and lay an egg his junior year. He threw for 2,197 yards and 23 touchdowns and completed 59.8% of his pass attempts, as the Hornets went 8-3 and made it to the second round of the 7A state playoffs.

He has looked like an evolved form of his prior self in 2021, as does the Hornets’ offense.

In Roswell’s first game of the season, a 45-26 win over South Forsyth, Roper set the tone for his senior season by passing for 447 yards and six touchdowns. He threw four touchdowns and over 300 yards in each of the Hornets’ next two games, and following a bye week, he tallied 325 yards and five touchdowns Friday in a 41-21 win over Campbell.

A huge part of Roper’s growth as a quarterback, he and his head coach acknowledged, is simply the extra time in the system. He’s no longer a new face in the locker room, and he actually had a spring and summer full of practices before the 2021 season.

Another key to Roper’s evolution, which can be seen after watching him play just one drive, is the way he uses his legs to open up the field.

He’s not rushing the ball often — although when he does, he averages over 7 yards per carry — but he’ll often move outside the pocket before finding a receiver. By doing so, he gives his receivers more time to shake their defenders, some of whom get distracted when they see the quarterback start to take off from the pocket.

“In the offseason, we worked on escape drills a lot,” Roper said. “The receivers know what to do, and they’re great at it. The O-line, they give me enough time to throw the ball. Sometimes I hold the ball a little too long, and that’s on me.”

Speaking of the receivers, Roswell has some quality weapons in the passing game, and Roper likes to spread the wealth.

Junior Ethan Nation, a cornerback with over 40 FBS offers, triple-times as a receiver and return man for the Hornets. He leads the team in receptions (18) and receiving yards (322).

Behind him is senior Shaun Spence and juniors Ethan Crite, Zeke Moore and Chris Elko, who all have over 100 receiving yards and multiple touchdowns to their names.

As Roper’s production has picked up, so has his recruitment. Following his six-touchdown performance in Week 1, he received an offer from Morgan State — his second offer following one from Western Carolina in April. He said Toledo has been in contact, in addition to coaches from Georgia Tech and Ole Miss.

Georgia Tech saw Roper complete 17 of 22 pass attempts for 330 yards and four touchdowns in a win over North Paulding, and Roper said the entire Yellow Jackets coaching staff will be in attendance for his next game at Walton.

Coaches from Ole Miss might come out to Georgia to catch the Roswell gunslinger play a game later in the season.

“It’s really picked up a lot,” Roper said. “I got schools saying they’re going to make it out to every game, so it puts a little more pressure on me.”

So far, he’s been able to handle the pressure and perform, on top of defenses knowing what to expect when they line up against him.

With Prince Avenue on a bye in Week 6, Roper could take over the state lead in TD passes in Roswell’s game Friday at Walton (2-2). And if somehow, he manages to keep putting up numbers at his current pace, he would finish the 10-game regular season with over 3,500 passing yards and 47 touchdowns.