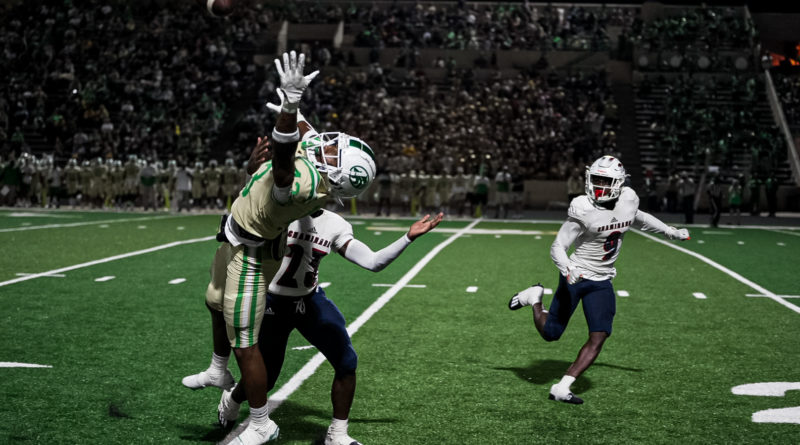 Buford had a shot last week to stake its claim as the top team in Georgia, but the Wolves fell 7-0 at home to Miami’s Chaminade-Madonna (photo above by Josh Major).

The team with a chance to shake things up at the top this week is undefeated East Coweta, which travels to play at No. 1 Collins Hill. And No. 2 Lee County faces its biggest test of the season with a game at No. 6 Warner Robins.

After shutting out Alpharetta, and with Buford’s loss to Chaminade-Madonna, Collins Hill remains the clear-cut No. 1 team in Georgia.

Lee County has outscored its opponents 237-57 after a 64-14 blowout over Lithia Springs in Week 5, but a big game awaits in Week 6 at Warner Robins.

North Cobb lost its season opener to Buford, but has won every game since then by at least two scores.

Milton had a bye in Week 5 and will face McEachern on the road Friday.

Buford suffered its first loss of the season in Week 5, as Chaminade-Madonna made the trek from Florida and beat the Wolves 7-0 in a defensive battle.

Warner Robins remains undefeated after a 49-9 rout of Houston County and hosts No. 2 Lee County on Friday in the game of the week in Georgia.

Mill Creek continued to impress on both sides of the ball and special teams with a convincing 38-10 win over West Forsyth.

Grayson hasn’t lost a game since its season-opening loss to Creekside, but the defending state champion Rams have had some close wins.

Walton had a bye in Week 5 and on Friday will host Roswell, a team poised to climb into the Top 25 with a win.

Cartersville remained undefeated after a 24-14 win over Cherokee in Week 5 and has a bye in Week 6.

Colquitt County was absolutely dominant in a 55-0 win over Heritage-Conyers in Week 5.

After a tough loss to Cartersville, Creekside got back in the win column by cruising past Drew 41-0 on Saturday.

Carrollton remained undefeated after a 56-15 blowout of Dalton in Week 5.

Lowndes had a bye in Week 5 and will face Valdosta at home in the Winnersville Classic at 8 p.m. Friday.

Marietta lost to Colquitt County to begin the season, but the Blue Devils haven’t lost since and are outscoring their opponents 145-78.

Jefferson had a bye in Week 5 and will face Flowery Branch at home on Friday.

East Coweta shut out Northgate 36-0 in Week 5 and heads to No. 1 Collins Hill on Friday in a battle of unbeatens.

West Forsyth fell to Mill Creek 38-10 in Week 5. Both of its losses have come against Top 10 teams.

Valdosta had a bye in Week 5 and will play at Lowndes in the Winnersville Classic at 8 p.m. Friday.

Marist had a bye in Week 5 and will face Harrison at home on Friday.