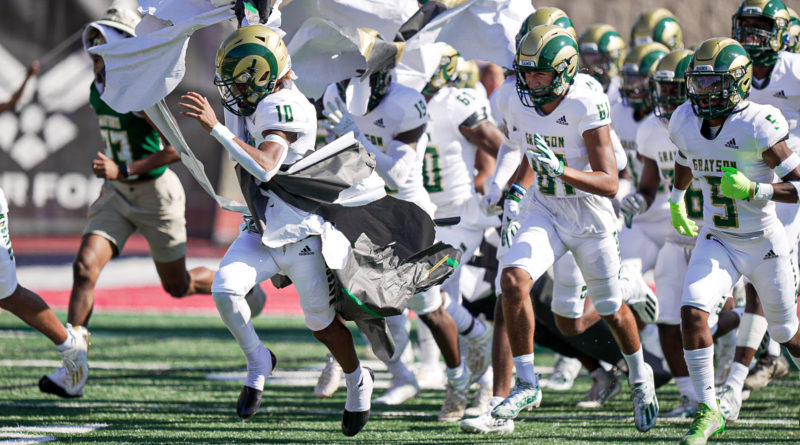 It seems like just yesterday the 2021 high school football season just got underway in Georgia, but many teams throughout the state — and more specifically Gwinnett County — either reached the halfway point of the season last Friday, or will do so by this Friday.

The midpoint of a season is a good time to take a quick assessment of a team’s progress, and it also seems like a good time to take a peek at some of the big stories so far in one of Georgia’s most notable high school football hotbeds — home of last year’s 7A and 6A state champions Grayson and Buford, respectively.

5. North Gwinnett: The Bulldogs might seem an add choice here given their 3-2 record following Friday night’s 10-7 win at Archer.

However, a closer look reveals that they’re clearly better than their record given a tough pre-Region 8, Class 7A schedule that includes six state playoff teams (in their respective states).

Yet North has managed to slowly get its offense in gear behind quarterback Ethan Washington, running back Marcus McFarlane and receivers Mariek Briley and Cade Funderburk. The defense, led by four-star junior linebacker Grant Godfrey, has stepped things up by allowing just seven points in the last two games.

The road ahead isn’t easy for the Bulldogs as one last non-region game against Top 5 North Cobb and back-to-back games against Top 10 Mill Creek and No. 1 Collins Hill (see below on both) are immediately on the horizon.

But things are looking up in Suwanee.

4. Grayson: The defending Class 7A state champs haven’t been as dominant as they were a year ago.

However, the Rams (4-1) are still a formidable force despite having to reinvent itself somewhat on offense, going from a well-balanced machine to a deep, ground-dominated attack led by junior Joseph Taylor Jr. and sophomores Dylan Elder and Joseph Stone Jr.

While Grayson went through some growing pains early as several underclassmen, including a few freshman, had to get their feet wet in the first few games, the maturation process seems to have accelerated of late behind veterans like Taylor, fellow junior Jalen Smith and seniors Mumu Bin-Wahad and Dylan Farrar.

And having made the plays they’ve needed for the most part in several close games, the Rams should once again be a team to be reckoned with into November.

3. Mill Creek: The Hawks (4-0) served notice that they are not only among Gwinnett County’s top teams, but also among the state’s top teams in all classifications.

Three of their wins have come against opponents that were state-ranked at the time, and none of them have been close, with the average margin of victory just under 30 points per game.

But it’s the defense — behind seniors Jayvon Henderson, Zach Jollay and Brandon Akers and junior Caleb Downs — that has been especially tough, having allowed an average of just 10 points per game.

2. Buford: The Wolves (3-1), winners of state championships in Class 5A and 6A the past two years, had their 16-game winning streak snapped against Florida powerhouse Chaminade-Madonna on Friday.

But make no mistake, they are still one of the favorites to be playing for another title in Class 6A later this fall.

They’ve already taken down highly ranked 7A foe North Cobb and remain among the state’s most powerful teams.

A lot of attention has justifiably gone to the numerous playmakers on offense like five-star receiver (and Florida State commit) Travis Hunter and four-star quarterback (and Missouri commit) Sam Horn, plus other seniors such as offensive lineman Jaylen George, running backs Spenser Anderson and Ryan Stephens and receiver Cam Pedro.

However, the defense is equally star-studded, with Hunter and seniors Christian Harris and Aaron Horton II locking down opposing receivers, while George, fellow senior Asani Redwood and junior Dion Crawford provide plenty of crunch in the front seven.

And after losing to Grayson in last year’s state championship game, the Eagles appear poised to make a run for a second shot at a trophy.

Mill Creek: It’s not surprising at all to see the Hawks in contention for a state playoff berth and among the top contenders in their region.

After all, they’ve qualified for the postseason seven straight seasons, including two state semifinal appearances, as well as a quarterfinal appearance just two years ago.

Still, after a pedestrian 5-6 campaign a year ago, it is a bit of a surprise to see Mill Creek so dominant this fall in getting off to its best start since 2016.

While the schedule has been competitive, it’s about to get even more stout, with home games against Grayson and North Gwinnett the next two weeks and another two-week stretch that includes a trip to Newton and a region showdown with Collins Hill at home in the final two weeks of October.

But given the talent and aforementioned adjustments head coach Josh Lovelady has made, the Hawks appear well-prepared to meet those challenges.

Greater Atlanta Christian: Few teams have been as dominant in their region and as consistently good in Class 2A and 3A the past dozen years than the Spartans, who have made the state championship game twice and the semifinals five other times.

It’s quite the head-scratcher to see Greater Atlanta Christian sitting at 0-4, but the bigger surprise is the nature of those losses.

GAC has been outscored 187-33 in those games, including a 76-7 loss to Tennessee powerhouse Lipscomb Academy in the season opener and a 47-0 loss to Cedar Grove this past Friday.

Injuries have been a big issue, with the Spartans having played without five senior starters against Cedar Grove, including starting quarterback Josh Sharpe and four-star Tennessee-committed offensive lineman Addison Nichols.

The good news is that while two of the next three games are against traditionally strong programs in Westminster and Sandy Creek, the schedule does ease a bit in the second half of the season.

So if the Spartans can get healthy, the door is open to grab a state playoff berth for the 10th straight season.

Archer: Like GAC, Archer dropped to 0-4 on the season last Friday with a loss at home to North Gwinnett.

However, that record is less surprising than that of the Spartans, and that’s not a slam on the Tigers.

Coach Andy Dyer always likes to load up his team’s pre-region schedule to get the players used to strong competition in region play and the playoffs, but he really outdid himself this year.

Archer’s first four opponents have a combined record of 14-4 so far this season and included two defending state champions (Grayson and Warner Robins), a state semifinalist (Westlake) and another playoff team (North Gwinnett) from a year ago.

The Tigers enter Region 7, Class 7A play this Friday, with the next five foes sporting a combined 8-18 record.

So like GAC, an opportunity is definitely there for Archer to claim its ninth straight postseason berth.

Hebron Christian: Coming off a 3-7 mark in Stan Luttrell’s first season as head coach a year ago, the Lions started 2021 with a 24-14 loss to a solid North Cobb Christian team in Class A (Private).

Since then, however, Hebron has caught fire since quarterback Gavin Hall was cleared to play by the Georgia High School Association after his transfer from George Walton Academy, which allowed Luttrell’s son, four-star junior and Tennessee commit Jack Luttrell, to move back to his natural position at safety.

We’ll learn a lot about the Lions in the near future, with upcoming games against defending state champ Prince Avenue Christian and Athens Academy, plus games against state semifinalist and Gwinnett rival Wesleyan and Holy Innocents Episcopal ahead in Region 5, 1A (Private) play, both on the road.