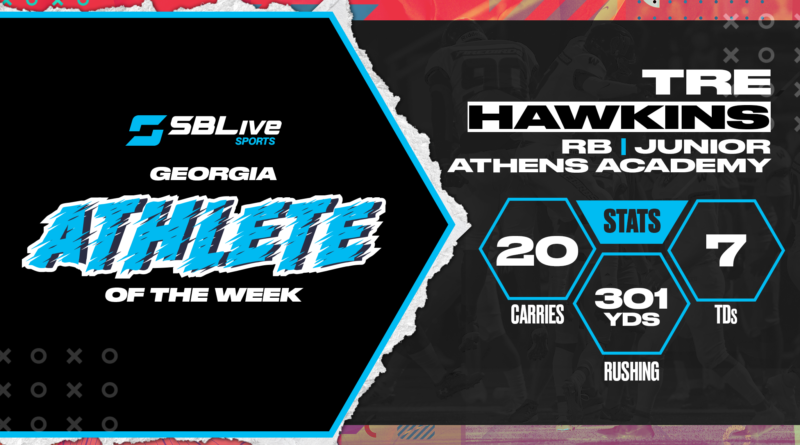 Congratulations to Athens Academy running back Tre Hawkins for being voted SBLive’s Georgia High School Athlete of the Week for Sep. 6-12!

The junior had 20 carries for 301 yards and seven touchdowns (both breaking his own school records) in a 70-27 win over Providence Christian.

Hawkins ran away with this week’s honor, receiving 77.12% of the total vote.

Brewer was the individual county winner at the Gwinnett County Cross Country Championships. She placed first in the 5K with a time of 19 minutes, six seconds.

Brister knocked in the game-winning run in with a two-out, walk-off single in the seventh inning against North Gwinnett.

Davis went 3-for-3 with a home run, two doubles and four RBIs against Peachtree Ridge.

Hunter recorded 10 receptions for 202 yards and a touchdown in a 34-0 win over Rome.

Kromah, a freshman, rushed for 227 yards and three touchdowns against Lowndes.

Lewis threw five touchdown passes in a 56-7 win over Ridgeland.

Pace rushed for four touchdowns, including the game-winner, against Valdosta.

Pickens came only a single away from completing a cycle in a 10-2 win over Lanier. She went 4-for-4 and hit two solo home runs, a triple, a double and two RBIs.

Prangley threw for 258 yards and five touchdowns against Sprayberry.

Roper threw three touchdowns and rushed for one before halftime in a big win over North Paulding.

Vaughn made five field goals, including a 43-yarder, in a win over Salem.

Webb returned a kickoff and punt for touchdowns against Hillgrove.

Wright, a sophomore, went 20-of-23 for 296 yards passing and one touchdown, while adding one rushing touchdown vs. Flowery Branch.