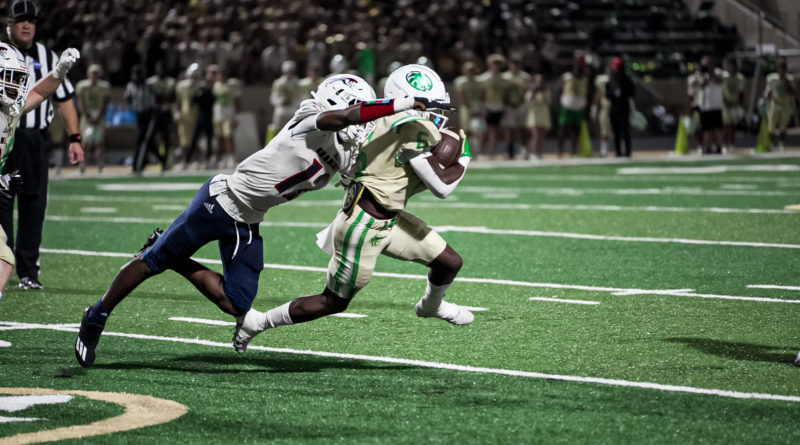 Buford could have staked a claim at No. 1 with a win over Florida visitor Chaminade-Madonna (photo above by Josh Major), but the Wolves fell 7-0 in a defensive classic.

Mill Creek stopped West Forsyth’s run of knocking off ranked opponents with a convincing road win, and South Paulding scored the upset of the week by knocking off Rome.

Collins Hill secures its No. 1 position and undefeated record with a dominant shutout, even though two touchdowns were called back.

Buford suffered its first loss of the season to the No. 12 team out of Florida. Sophomore running back Davion Gause rushed for the only touchdown of the game.

Lee County continues to dominate defenses in a game that was 36-6 at the end of the first quarter.

North Cobb outgained Etowah 433-134 in total offense in the shutout.

Milton had a bye week and will travel to play McEachern on Sept. 24.

Grayson gained an 18-point lead in the first half and managed to hold off Harrison long enough to win the game.

Warner Robins put up 35 points in the first half while holding Houston to only 3.

Mill Creek pulled away in the second half thanks to three third-quarter touchdowns.

After a strong start to the season with an overtime win over Lowndes and a blowout of Pope, Walton has lost its last two games.

Cherokee held a 14-10 lead in the first half, but the Cartersville defense was too much from there and the offense had just enough.

Colquitt put up 42 points in the first half and put it on cruise control from there.

Langston Hughes lost by one point in Week 1. Since then, they haven’t lost a game, including this shutout as they head into a bye week before a big game at Westlake.

Dalton scored all 15 points in the second quarter, while Carrollton scored at least one touchdown in all four quarters.

Lowndes had a bye week and will host crosstown rival Valdosta in the annual Winnersville Classic next week.

West Forsyth played four straight top 10 teams to start the 2021 season. Mill Creek has proven to be the best of them.

Westlake did the majority of its scoring in the first half, putting up 46 points.

Jefferson had a bye week and will host Flowery Branch next week.

East Coweta improves to 4-0 after shutting out Northgate in Week 5.

Fitzgerald remains undefeated after a game that was supposed to be Cairo’s season opener. The game was rescheduled due to COVID-19 protocols.

Valdosta had a bye and will travel across town to face rival Lowndes in the Winnersville Classic next Friday.

Rabun County dominated Saluda on the road in South Carolina and led 49-7 at the half.

Marist had a bye and will host Harrison next Friday.

Woodward Academy had its best offensive performance of the year on Thursday night in its blowout win on the road vs. Mundy’s Mill.

In the biggest upset of the week, South Paulding beat a ranked opponent for the second time in program history.