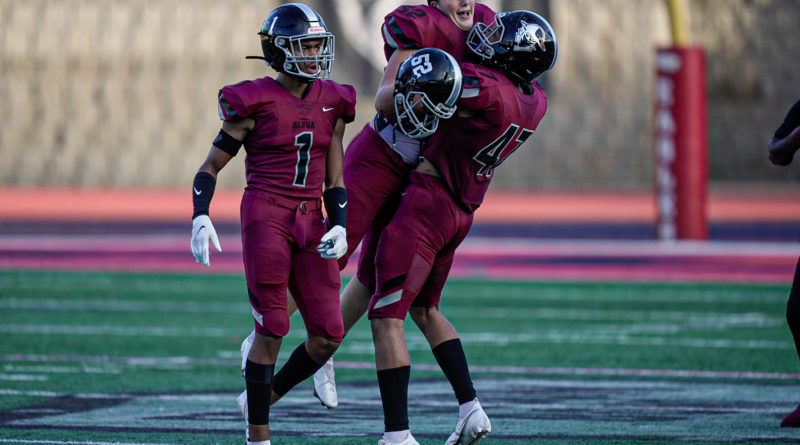 Four weeks are in the books for Georgia high school football, and the state has proven to be one of the most competitive in the country.

Week 5 has its fair share of interesting matchups, including out-of-state clashes and Alpharetta (photo above by Josh Major) continuing its brutal first-half schedule with a game at No. 1 Collins Hill.

Alpharetta has struggled to a 1-3 start this year against tough competition, and the Raiders’ struggles are likely to continue Friday. The main reason to watch this game is for the talent Collins Hill has to offer, but Alpharetta is used to playing top teams, as the Raiders’ three straight losses have come against Hoover (Alabama), Grayson and North Cobb. Collins Hill’s duo of Sam Horn and Travis Hunter has been otherworldly this season, as many expected it would be. In his last game against Rome, Horn (Missouri commit) had 347 passing yards and three touchdowns. Hunter (Florida State commit), the top-rated senior in the country, had 10 receptions for 224 receiving yards and a touchdown.

The record-setting Brock Vandagriff is now at UGA, and his replacement is looking like the perfect successor at Prince Avenue. Sophomore Aaron Philo leads the state in passing yards with 1,379 and 15 touchdowns. He is a big reason the team has scored three straight blowout wins. This is a big game for Wesleyan, as the Wolves are 2-1 and aiming again at a deep title run, but they know a championship must go through Prince Avenue. Wesleyan was outright dominated last year against the Wolverines with a 52-26 loss and a 50-3 playoff loss, so look for the Wolves to come out with payback on their minds.

ELCA coach Jonathan Gess looks to get his team back on track after a rough 1-2 start to the season. The Chargers are coming off their worst record (9-4) of the past six seasons. If the Chargers want to get back to their form of winning four state titles in a row, then they will have to come to play against the Titans. Blessed Trinity is 2-2 on the year and looking to dominate the Chargers like last year. The Titans have one of the top-rated junior running backs in the nation in Justice Haynes, who in his freshman and sophomore years ran for over 1,700 yards. He ran for over 100 yards against ELCA last year, so expect to see some more magic from him this time around.

Archer is 0-3 to start the season, but the Tigers have played one of the toughest opening schedules in Georgia. They have already faced Westlake, Warner Robins and Grayson, but they played extremely well against Grayson, 15-13 to the defending state champ. Last season they started 0-3 and then won seven of their next eight games, so be on the lookout for a resurgence. North Gwinnett is 2-2 after an 0-2 scoring 30-plus each in its two straight wins. The Bulldogs have an elite rushing trio in Marcus McFarlane (401 yards), Ethan Washington (239 yards) and Brinston Williams (186 yards).

Both teams have enjoyed strong starts, as Thomasville holds a 4-0 record while Oconee sits at 3-0. Last season the Warriors routed the Bulldogs 44-14, so you can expect Thomasville to be aiming at revenge. This is a huge game for the Bulldogs, who have a chance to beat a traditional powerhouse early in the season and move toward winning double-digit games for the first time since the 2017-18 season. Oconee County is an undoubted contender for a 3A state title, and these are the types of games it needs to win to maintain that status. This game isn’t a must-win by any means for either team, but whoever wins here will be riding high in confidence heading into the second half of the season.

Both teams are 2-1, and each has suffered a lopsided loss — Brookwood to Collins Hill 36-10 and North Paulding to Roswell 45-10. Brookwood has turned it around since that opening-week loss, scoring 44 and 59 points in its past two wins. Quarterback Dylan Lonergan already has 900 yards passing and 10 touchdowns. North Paulding started the season 2-0, scoring 35-plus points in both games, but Roswell dealt a deflating loss last week. This is a big game for North Paulding because these are the games they have to win to prove they’re better than last year’s 2-8 record.

Warner Robins is 3-0 heading into Week 4 and ranked No. 7 in SBLive’s Georgia Top 25. The Demons have been dominant early on, averaging 49 points per game, and they haven’t given up 100 yards rushing in those three games. Warner Robins’ rushing defense will be tested Friday, as Houston County running back Simeon Askew has 752 rushing yards in four games. Houston County has to be considered a big underdog, but if Askew can get it going on the ground, this crosstown matchup could get interesting.

Rabun County is aiming for a magical season in quarterback Gunner Stockton’s last year of high school before leaving for UGA. The Wildcats have been lights-out since their only loss (in their opener to Jefferson). They are set to play their second of three straight games against out-of-state opponents. Saluda has moved past the fact that last year their season was reduced to only six games, and the Tigers have come out of the gates swinging. They’re averaging 49 points a game and haven’t allowed more than 20 through three games. Expect a shootout in this interstate matchup.

The Chaminade-Madonna Lions travel north to face the Buford Wolves in an interstate matchup. The Wolves are starting to get some national attention after their hot 3-0 start, and they made their first appearance this week in SBLive’s Power 25 at No. 17 in the nation. The Lions should have their hands full after the long trip from Miami to Buford against a supremely talented team, but Chaminade-Madonna has a stout defense that will have the Wolves’ attention. Chaminade-Madonna has one of the top edge rushers in the country in senior Kenyatta Jackson.

There is too much great Georgia football to stuff it all into just 10 games. Here are 10 more solid matchups in Week 5: